Worn by the Weather 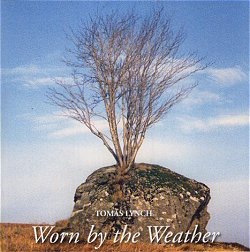 I have just walked through, and then run away from, my weekly farmers' market after stumbling upon two buskers, a guitarist and a bodhrán player, who were murdering that eminently murderable Irish song Whisky in the Jar.  They were not even just terrible, they were reading the bloody words! (alright, a peculiar bugbear of my own, singers (?) - particularly those doing it for money - who haven't bothered to learn the words).  Ah, but I've got the perfect remedy - Tomás Lynch's stunning recording of the song on this CD.  He manages here, as he has done in the past with such songs as The Mountains of Mourne and The Foggy Dew, to return oversung songs to their original 'ballad' versions, ie stories beautifully told.  He calls this particular example 'a love song more sinned against than sinning' and on his new CD he also gives the same treatment to Danny Boy, and if you don't shed a tear on hearing it I challenge you not to at least choke up a little.

This new record has been (too) long a-coming, but is spectacularly well worth the wait.  The record is dedicated to his long term partner Carolyn 'Mack' McKeown who died in 2004.  Almost all the songs are about finding love, living it, losing it, and mourning its loss, such as in I'm Stretched on your Grave, an amazing song from a 17th century Irish poem, translated by Frank O'Connor and put to music by Philip King of Scullion, who recorded it in 1979.  Though much recorded subsequently, I'm sure never more relevantly, nor more powerfully, than here.  The title of the CD comes from this affecting, though rather scary song 'My apple tree, my brightness, it's time we were together, For I smell of the earth and am worn by the weather'.

Other songs, equally beautifully sung, include I Wish my Love was a Red, Red Rose which is precisely the song recorded by Sarah Makem, on MTCD353-5 - with only her word Dublin supplanted by his Belfast - and on a completely different tack, the political, or possibly apolitical, Song for the 12th of July 1843, written by John de Jean Frazer.  The Battle of Aughrim was fought on 12 July 1691, and seems to be the reason that it is still 'celebrated' today by the Ulster Orangemen.  Possibly the song has a further significance that I do not understand, but it sings of supporters on both sides of the divide: "Still then, the orange lily be your badge my patriot brother, It's the everlasting green for me, but we for one another."

All the songs are accompanied by Tomás' lovely, moving guitar, except for the brilliant, unaccompanied The Irish Jubilee, described here as 'an inspired piece of nonsense from the vaudeville tradition'.  Here is a light relief from all the intensity of feeling, putting one immediately in mind of the late, very great Freddie MacKay, but it is undoubtedly Tomás himself having a well-deserved break.

Any who know his work will also know him as a terrific piper; all the literal expression that is placed into the songs finds its way equally surely into the pipe tracks.  While I admit to being no fan of the high whistle, heard here on Black 47/Three Sides of the Road/Concertina Reel - and I'm sure there will be many who love the sound - his piping is always, for me, the greatest pleasure.

The CD finishes, very appropriately, with Easy & Slow - that ultimate Dub song learned from Frank Harte, the ultimate Dub scholar.  Tomás Lynch, exiled Dub, sings here another murderable Irish song with tenderness and one can only call it class.  Although one can hear much of Tomás' pain through the songs every track is inclusive, not exclusive as it might be.  It is a delight to have such a fine record representing such a fine singer and musician.

It's due to become available through Cadiz Distribution shortly, but you can get it right now from Tomás at: tomas.lynch@btinternet.com