Bushes and Briars, The Ploughboy's Dream, New Garden Fields, The Cuckoo, Ward the Pirate, Lovely on the Water, The Turtle Dove, Riding Down to Portsmouth, Riley the Fisherman, Lovely Joan, Shanties: Santa Anna/Dollar and a 'alf a Day/Storm Along, Banks of Green Willow, It Hails It Rains, New Christians, Horkstow Grange.

Regular readers may be surprised that I'm reviewing this CD - and, to an extent, I'm surprised, too!  However, it's a good record of some very good singers, and all traditional songs ... 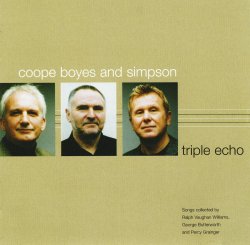 and there are some important things to be said about it - so, why not?

The first surprising thing I need to do is to wholeheartedly praise the CD's booklet!  With just 10 pages of relevent text, it will be apparent that there's a great deal of information which has been left out ... but what has been included is, to my mind, the most important stuff - information about the people; the traditional sources of the songs.  Not only that, but it is presented in such a clear and well-written way that I was able to read it all in one go, start to finish, without any of those annoying "What about ...?" questions springing to mind.  When I turned the last page, all I wanted was more!  The booklet author is not credited, but I think I detect the hand of Georgina Boyes here ...  Whoever it was: my congratulations on a job very well done!

Naturally, I would have liked to know more about the actual songs, to have had their words transcribed, even to know something of the performers' thoughts about them ... but you don't get that in 10 pages.  And you don't get more than 10 pages in a publication which is intended to make money, rather than to lose it!  I must be content with what I've got ... and I am.

The CD is a 'thematic' one in that it concentrates on the collections of the three main composers (Vaughan Williams, Butterworth and Grainger) who took up the challenge to go out into the countryside and hear the 'folk' sing the folksongs in the early years of the last century, and to attempt to 'create a new basis for English music'.  Whilst no rationale for this choice is given, it makes an interesting theme - and provides some great songs, some of which will be new to many listeners - at least in these versions.

Regarding the CD itself, I have more mixed feelings.  Anyone who has heard Coope, Boyes and Simpson (is there anyone who hasn't?) will know that what you get is three very good voices singing in a harmony style which owes rather more to the revival than to the tradition.  This last is intended as a statement of fact, not a criticism.  Here, you also get a solo track from each of them - though two of these have instrumental accompaniments, one of which is admirably unobtrusive, the other a little less so.

The CD's content is pleasantly varied - but this is where I find myself less-happy with what's on offer.  I like what the group does with songs which stand up to choral treatment; carols like New Christians Awake, an 18th century piece in the South Yorkshire tradition.  And I don't mind this treatment when applied to the group of three shanties, or country songs like New Garden Fields or Lovely on the Water, even if I don't feel it's entirely appropriate at times.  But I do have problems with serious songs and ballads when treated in this way.

I want to hear a single individual tell me what s/he feels about The Banks of Green Willow or Ward the Pirate; I want to hear the passion, the heartbreak, the excitement in the singing, and to have that communicated by all the wonderful nuances of rhythmic and melodic invention of which good traditional singers were capable.  What I get here is a lot of extremely clever vocal layering and harmonies ... which I can appreciate, but which don't do the job for me ... or don't do it half as well!  This is by no means a criticism of the singing; more one of the decision to attempt these story-songs in this way.  On track 8, Lester Simpson provides a good solo version of Riding Down to Portsmouth, and I find this a far more telling performance than any of the group versions of similar songs found here.

This is, of course, only my own opinion, and it's not one likely to be shared by many of the likely purchasers of this CD.  That's as it should be, of course - but I wonder how many of these likely purchasers of this CD will have ever really listened to any good traditional singers, so as to be able to make a meaningful comparison?  Whatever ... this is a very good record, and contains a great deal of 'beautiful noise'.  And I think it would probably please a good many more people than those it's primarily intended for.