Argia is the name of an ancient Sardinian ritual.  During Argia, music and dance could go on for days, fulfilling the therapeutic role of healing those who had been bitten by a mythical insect, the argia.  In 1985 two Sardinian musicians, Alberto Balěa (guitars, clarinet, benas, voice) and Enrico Frongia (voice and guitar), named their group and musical project Argia and produced an inspired record combining traditional Sardinian music and their own original compositions.  The group also included Riccardo Tesi on accordion, the voice of Andrea Biosa and sometimes the percussion and drums of Gino Torni and Johnny Betti, though Balěa and Frongia often chose to perform live just as a duo.

Under the name of Ritmia, in 1986 the two Sardinian musicians joined forces with Riccardo Tesi and Daniele Craighead (reeds) to produce one of the best recording of original compositions inspired by Italian traditions - Forse il mare.  The two records went pretty much unnoticed [Not here, they didn't - Ed], but became sort of cult items in the roots music circuit and were reissued by Robi Droli as CDs in 1993 and 1994.  With the groups Ritmia and Sonos, Balěa and Frongia showed in the eighties an innovative approach to renewing Italian and Sardinian musical traditions.

Today they are back as a trio with the double bass and the voice of Riccardo Lai.  Lai comes from Sardinia though he lives in Rome and is mostly active in the jazz scene, especially with the Méta Quartet ('Sintesi', Via Veneto Jazz), along with Antonello Salis (piano), Sandro Satta (alto sax) and Fabrizio Sferra (drums).  Their music is an outstanding blend of jazz and improvisation techniques and Sardinian roots.  Lai is equally inspired by Charles Mingus and Sardinian dances and since the eighties the guitar of Alberto Balěa has been a regular feature of Lai's quartet including the recording of Totem in 1988 where they show a unique empathy for each other's ideas.

Given this remarkable background, one could expect their new CD Microcosmi to be a potential landmark within Sardinian music.  Maybe next time! 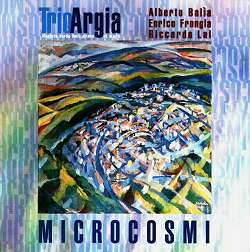 Microcosmi gathers eight original compositions based on traditional dance rhythms, poetry (by Montanaru), popular rhymes and religious polyphonic singing.  While the CD shows a fascinating variety of different Sardinian 'landscapes', it lacks somehow an overall consistency: the tunes are often born out of strong ideas, though the arrangements don't always do them justice.  The studio recording does justice to Argia's rich colour palette and to Balěa's superb guitar technique echoing launeddas and dance rhythms, but one cannot avoid the idea that maybe a live recording featuring the same compositions would have provided a more energetic and coherent framework to the whole project.  As the the title of the CD and its beautiful cover painting by Antonangelo Casula seem to suggest, the overall work remains sort of fragmented, but not without moments of outstanding music.

Two compositions are particularly interesting for their ability to echo the religious traditions within a song format.  In arranging Aggius, Balěa and Frongia based their ideas on the polyphonic singing of the Holy Week traditions in Northern Sardinia.  The religious inspiration of the music is combined here with secular lyrics, four lines from a love song titled Tantu tempu donosa, and with an in crescendo final part which is reminiscent of dixieland accents and melodic lines.  The Three Kings are the subject of Gobbura, a rhyme-song following a traditional way of singing from Sassari.  Over the years Lai has sung it in many concerts accompanied only by drone notes on his double bass and here he is joined by a very discrete Balěa on acoustic guitar.

Two of the most popular Sardinian dances close the CD, Sa danza and Ballittu - the circle dance or ballo tondo.  Sa danza is always a concert hit and it transmits a contagious positive vibe (sound clip).  Here it is given a 'swing' feeling which is maybe a nice development during a live concert but with less convincing results in this recording.

By contrast, Ballittu reaches an excellent balance between the lively theme played by harmonicas and the sung part (sound clip) ending with the evocative sound of dancing steps.  Don't get caught by the beginning of this track (8) which for the first 105 seconds is still the final part of track 7, a narrative song based on the lyrics about a battle during the first world war by P Mereu.  Ballittu only begins with Lai's double bass pattern at 1.45: a dance which is definitely worth waiting for!