The Swans on the Loch
and other traditional tales from Skye

Welcome; The Swans on the Loch; The Worthy Blacksmith; The Ghost of Tiel; The Three Feathers; Fionn and Grainne; Crippled Norman; Brian and Deirdre; Farewell. 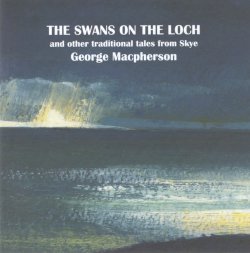 George Macpherson was taught the rigorous art of storytelling from the age of three onwards, at his grandfather's knee.  Indeed several of the seven stories on this CD were learned from older men.  He has also published two books of stories - Traditional Tales of North West Skye [1984] and Highland Myths and Legends [2001].  The stories are told in English [as George learned them] but the collection is framed with a brief welcome and farewell in Gaelic, to remind us of their Celtic roots.

George Macpherson is a delight to listen to.  His Highland voice is clear, his delivery well paced, with timely and adroit use of pauses.  He sometimes uses his voice brilliantly to dramatise conflicting characters (as in The Worthy Blacksmith where he alternates between the blacksmith and the savage Water Horse), or to show characters' different ages, as in Crippled Norman.

The stories and their provenance are firmly rooted in Skye localities, yet are part of the common Celtic tradition and beyond (some parallels can be drawn with Chinese storytelling and with Ovid's Metamorphoses.)  This mythology is filled with quests, often aided by gifts of magical objects and talking animals, befriended by the hero's generous actions. 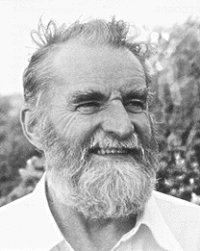 Magical transformations are common; people readily turn into feathers or swans, pebbles into mountains or rocks.  The CD's programming shows some clever juxtaposition, for example after the high heroism of Fionn and Grainne comes the colloquial humour of Crippled Norman.

I found the stories and their delivery riveting to listen to, and they gave me much to reflect on for hours afterwards, including the beauty of the Highland landscape, and the wonderful values, such as the generosity, honour, courtesy and endurance permeating Fionn and Grainne or the love and loyalty in The Swans on the Loch.  Though it is never preachy, throughout the collection emerges a sense of reverence for all creatures, and a sense of interdependence - that your kind and just acts result in others helping you.  I will also introduce my pupils to this collection, hoping they will share my pleasure.

The accompanying booklet is informative and interesting, giving background information about the stories and their settings, the provenance of stories and other versions of them, biography and photographs of George Macpherson, and a list of further resources.