A Story to Tell 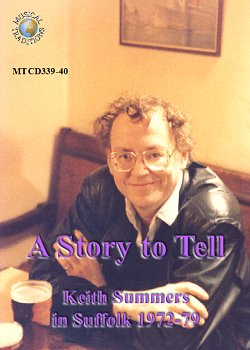 As many Musical Traditions readers may be aware, this new release of Keith Summers' Suffolk field recordings is intended as a companion volume to the Veteran CD Good Hearted Fellows (VT154CD) issued last year.  What we have here are 75 tracks - over two and a half hours of music - spread across two CDs, the vast majority previously unreleased.  The set comes in the usual DVD case with a booklet containing detailed notes on the performers and tracks - as is usual in an MT release - as well as a candid account by Keith himself of his experiences collecting in Suffolk in the 1970s, as told to Paul Marsh in October, 2003.  This is both informative and entertaining - 'a story to tell' indeed!

And what of the music?  Here we have a very generous helping of rural social music from East Suffolk pubs, which Keith was astonished to find had continued in such abundance when he first went to the region in the early 1970s, recorded in the pubs themselves and in performers' homes.  As such, all performers are male, with the exception of singer Aileen Stollery, who gives us two songs.  Keith Summers mentions that the pubs were still mainly male preserves in the early 1970s, and this was undoubtedly so, although interestingly the Kennedy/Lomax film of Blaxhall Ship from the early 1950s shows several women joining in the singing and step dancing.  It may be that such an unusual occasion as a film crew in attendance drew more people to the pub than was usual, although the women concerned seem to know the song choruses well enough and to be able to step dance.  Keith's information in the notes about the filming, and locals' reactions, has a lot more to say on the subject!

The dance music here is a fair selection of the types of tune commonly played in the pubs of the area: hornpipes, particularly Pigeon on the Gate and Sailor's Hornpipe, for stepdancing, polkas, schottisches and a fair smattering of song tunes.

Of the three main fiddlers featured here, Harkie Nesling plays in an old local rural style, much perhaps as Harry Cox did, whereas Pip Whiting's playing shows influences from both his travels abroad and his musical literacy.  It's pleasing to see the inclusion of Cecil Fisk's dolls dancing to Pip Whiting's playing (sound clip: Fairy's Hornpipe).  Eley Went's versatile style demonstrates his years of playing in dance bands in Woodbridge.  Keith Summers quite rightly compares him to Norfolk's Walter Bulwer.  We also have a tantalisingly short track of 'Spanker' Austin playing Mary Anne on the fiddle before singing the song, a music hall song which has not been much recorded amongst traditional singers, the only one coming to mind being Derbyshire's George Fradley.

The melodeon is well represented here, and rightly so, as it was certainly the main instrument played in the pubs to accompany singing and step dancing in the area.  Here we have seven different players, from Fred Pearce's straightforward one-row playing to the full, rich sound of Font Watling's two-row instrument, and including such masters as Fred List, George Woolnough and Oscar Woods.  I particularly like Ted Cobbin and Peter Plant playing together with Abie My Boy (sound clip).  There's also dulcimer player Reg Reeder with a beautiful pair of waltzes, and my one disappointment is that there's not more of his sublime playing, particularly as he doesn't feature on Good Hearted Fellows at all.  Sprightly mouth organ playing from Tommy Williams and The Peacock Band and some step dancing from Wattie Wright to Font Watling's playing all add to the variety.

The singing is equally varied and includes most of the usual suspects from the area: various Lings, the declamatory styles of Cyril Poacher and Jumbo Brightwell and the quiet, reflective delivery of Alec Bloomfield who, by the time these recordings were made, had moved away from the area to Newark.

A good spread of material includes local favourites such as The Yellow Handkerchief and A Broadside, with much less common songs such as Ted Cobbin's Doing My Duty.  It's also wonderful to hear Bob Scarce and Jimmy Knights still singing so well at the end of their very long lives (sound clip: Out with my Gun in the Morning).  A good mixture of the traditional, music hall and comic songs reflects the variety to be found in a night's pub singing.

It's also pleasing to have several tracks of talking to add to the overall picture; great, for example, to hear Cyril Poacher and Geoff Ling speak about Bob Scarce's singing before Bob himself sings Three Jolly Sportsmen.

In all, this is a very welcome addition to the substantial amount of recordings of traditional East Anglian music available at present and a very fitting tribute to Keith himself whose enthusiasm and dedication made these superb recordings possible.