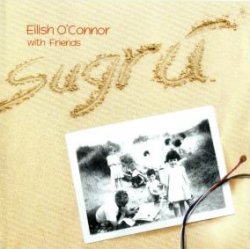 Eilish, along with her brother Gerry, was taught the fiddle by her mother Rose and has maintained an enthusiasm and love of the music from an early age.  This is a wonderful record of traditional Irish dance music played by a fiddler with an energetic and rhythmical style which really communicates her enjoyment in playing.  Eilish also shows her skill on the tin whistle on a couple of tracks.

The tunes presented here feature Eilish in the company of friends and family.  Most of the friends are from the area around Kinvara, but flute player Siobhan Kennedy joins her on two tracks which are linked back to their days in an under-11 ceili band which won the All Ireland.  The area around South Galway is still incredibly rich in traditional music and many of the friends need little introduction to anybody with an interest in Irish music.  Fiddler Maire OĺKeeffe has recorded and broadcast widely, uilleann piper Marion McCarthy is one of three musical daughters of the great Clare concertina and pipe player Tommy McCarthy, and Charlie Harris, who played with the ceili band Shaskeen for years, is one of the most highly regarded and much loved box players in Ireland.  Eugene Lambe is a world class pipes and flute maker who joins Eilish for a tin whistle duet.  Eilishĺs brother Gerry joins on fiddle and her husband Frank Kilkelly provides tasteful piano and guitar accompaniment.  Johnny Ringo McDonagh adds his subtle bodhrán on a few tracks and John Faulkner provides bouzouki as well as production assistance.

Jigs and reels abound but a set each of hornpipes, mazurkas and marches add interest to the changing combination of instruments on each track.

The idea of a CD of duets built on familiar repertoire developed through pub and kitchen sessions is one which has brought some fantastic spontaneity to the music.  The jigs Killavil Fancy and Tonraĺs were recorded with piano accordionist Mary Finn straight after a session in Winkles bar in Kinvara.  Similarly, tunes with Maire OĺKeeffe were recorded with Maireĺs new-born son sleeping upstairs while mum got a much needed fix of music.

The production and mix of this record is well up to the high standard that seems to have been set for traditional recordings, the lead instruments are well balanced and the accompaniment is clear but never obtrusive.  A number of the tracks feature no accompaniment at all and the music is allowed to sing out sweetly.  There are brief but informative notes on each selection written by Eilish.

It is difficult to pick out particular tracks when the general standard is so high, but some tracks are simply outstanding.  A mighty set of unaccompanied reels with Gerry ending with Ed Reaveyĺs The Shoemakerĺs Daughter is followed by Eilish and Eugene playing a couple of Micho Russellĺs old Clare jigs on two tin whistles backed by Johnny Ringo.  A huge contrast in styles but both tracks feature beautiful tunes well played.  The whole CD goes on presenting new delights.

Two fiddles together produce a magical sound, and the alchemy between two musicians playing the same instrument seems to be stronger than any other combination.  The two sets of reels played with Maire OĺKeeffe and three sets with Gerry OĺConnor would be hard to beat.

Before ending the record by playing a couple of marches with Siobhan Kennedy from their ceili band days, Eilish plays her current favourite tunes with Charlie Harris and, as much as any track, this selection sums up the general feel of the CD.  The music is never rushed but has a great drive and rhythm and that sense of ease that comes from playing together over a number of years.

Kevin Crawford recently produced a record of duets with fiddle players which I felt at times didnĺt work too well.  This record has managed to succeed where that fell short.  Whether itĺs the choice of solid old traditional tunes or the variety of instruments on the disc, it is very easy on the ear.  Underlying it all, there is a lot of seriously good fiddle technique being applied to make it seem so simple.