These two new Veteran CDs contain all of the material originally released on cassettes VT101-3 and 6, back in the late-eighties, with the exception of a dozen which can all be found on other Veteran CDs - 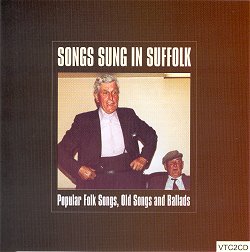 principally VTC1CD Stepping it Out.  I imagine that VT104 Those sentimental songs and VT105Songs of bargemen, fishermen and sailors will soon appear on CD, too.

Since all the performers to be heard on these CDs are fairly widely represented on many other Veteran releases, and since almost all readers will already own some of the cassette versions, I don't propose to review the performance aspects of the present offerings ... except to say that all are good, most are excellent, and that - together with Stepping it Out - they provide an unparalleled and comprehensive overview of a musical tradition in a discrete yet extensive geographical area of East Anglia.  No-one interested in British traditional music can afford to be without them.

I can find no indication in the booklet notes as to whether the original recordings have been subject to any noise reduction or other forms of digital enhancement for this CD production.  My guess is that they have not - no real reason to, as the originals were so good anyway - but I think the EQ may have been set slightly differently ... though it's difficult to know, as the relative performance of CD players and tape decks are not really comparable.  Whatever the case, all the recordings sound very good indeed in the present medium ... quite a lot better than the cassette versions, I think.

The other way in which the CDs score over the previous format is in terms of presentation.  Veteran have been steadily improving their packaging for a while now, 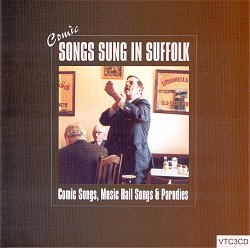 and these two new ones really do look very classy and smart, with fine colour photos front and back and 16-page booklets with lots more monochrome photos inside and a generally fine design scheme throughout.

Not only do the booklets look good, but their content is highly commended as well - and this is a pleasure to see, because a few of the other Veteran re-releases on CD have had very little in the way of additional information included.  Here, in addition to 16 or 17 photos mentioned above, there are an introduction and a general note about the songs (common to both CDs), together with mini-biographies and anecdotes on each of the singers and individual notes on all the songs.  Whilst none of this documentation is quite to the level of the MT Records booklets, all of it is good solid stuff and greatly to be welcomed.  Indeed, I can't imagine being able to better them, given the very reasonable space and typeface size constraints.  Top marks to John Howson for a really good job all round.

I'm given to understand that John is eventually intending to reissue all the Veteran cassettes on CD.  If he is able to maintain this high standard throughout the remainder of the programme we should be almost as grateful to him as I hope we were when he first issued this splendid and massive catalogue of traditional music from these islands a decade ago.  A really excellent project and very well worth everyone's support.