I need to be up front with readers and wear my biases on my sleeve.  Of the selection offered by your editor I chose this CD for review knowing beforehand that I would like it.  It hardly seems possible that I first heard John Strachan, 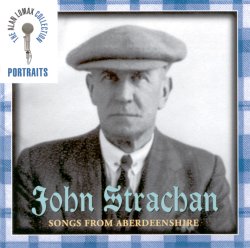 including a portion of the material featured here in complete versions, on the Topic reissue of the Caedmon Folksongs of Britain series more than three decades ago.  On those releases his was one of the standouts among a host of great voices.  Even today, scarcely a week goes by that I don't hear him in my head telling of how,

When Robin Hood was about twenty years old,
He happened to meet Little John,
A sturdy brisk blade, just fit for the trade,
And he was a lusty young man.

And my mind conjures up the humorous scene played out on the log over the river between Errol Flynn and Alan Hale in my favourite film of all time.  Strachan has only three verses of this old broadside ballad - a single version, thirty nine verses in length, appears in Child's compilation - but it's sufficient to create a coherent narrative 'anecdote'.

Born in 1875 and enjoying a social status more elevated than the majority of recorded Scottish singers, Strachan lived life as a well-to-do farmer.  Yet he was completely at home when rendering the songs of his employees, the so-called 'bothy ballads'.  His class attitudes led him to comment at one point on the lot of the farmworkers, "Och they werena oppressed, ye know ... plenty o' fun and frolic", almost certainly distorting the reality.  His repertory embraced ribaldry (The Ball of Kerrimuir, much truncated here), mnemonic verses designed to recall the tunes of various strathspeys, rural pastorals (Bonny Udney, perhaps the least attractive item on the entire CD, for its monotonous melody), and a huge rake of classic ballads.  Many of these latter reflect class distinctions of which he himself must have been keenly aware.

Of his vocal style, Strachan pitches the majority of items rather high, but this is clearly a conscious decision.  He sometimes just misses the true pitch of a note, but this too may be a deliberate technique.  Or, of course, it may be due to his age at the date of recording.  Whichever it may be, we not only forgive him but admire the way this creates an edge to the melody.  One relatively uncommon technique involves the rolling of the 'r' wherever it occurs at the beginning of a word.

I love the entire corpus of songs featured here and would ideally comment on all of them.  But space and reason dictate a more modest undertaking.

Where the Gaudie Rins reminds us of the communal singing so common within the old tradition, heard to advantage on the various Suffolk recordings from Blaxhall Ship, for example, but represented sparsely on modern field recordings.

Tracks 6 to 8 form a continuous sequence - part song, part narrative, part questioning - on Lomax's original tapes and are pleasingly given as an organic whole here.  This ably illustrates one advantage the CD medium has over earlier ones, and one used to great effect on recent releases from the Musical Traditions stable.  It simply would not have been acceptable to include this essentially anecdotal and fragmentary material previously.  Strachan has a problem finding his muse at the beginning of track six, but once he gets there the result is excellent.

Bearing a deliberately misleading title (perhaps originally to attract potential customers to buy the broadside), The Knight and the Shepherd's Daughter is a tour de force.  Having essentially raped a woman, she proves to be so determined and resourceful that the somewhat pretentious and cocksure (no pun intended) errant knight is forced into marriage by the king.  It features one of the great final ironic verses within the ballad tradition:

Noo, this couple they've got married,
She lives in Huntly toon.
She's the Earl o' Owries's daughter
And he's the blacksmith's son.

The introductory notes by Hamish Henderson (who died during the writing of this review) are just fine, and none the worse for having already appeared twice before in other formats.  They include important and fascinating chunks of Strachan's oral autobiography.  The booklet in general suffers just a little from some sloppy proofchecking.  On page 9, for example, there is a degree of duplication in the narrative; and on page 18 the transcription of the conversation should be separated at the final 'John Strachan' and that name placed in bold type.

Rounder have certainly come in for their share of criticism over some of the Lomax releases, many of them completely justified (see, for example, David Atkinson's damning indictment in the 2002 issue of Folk Music Journal, pp.240-246).  But as with another in their 'Portraits' series, that of Norfolk singer Harry Cox (arguably the finest release of 2000), here they have hit it just right.  There can be no criticism of the way the source material is presented.  And with a few minor exceptions the songs have been transcribed almost word perfect.  Scottish pronunciation has been rendered phonetically, and is just about spot on.  In keeping with those in Topic's Voice of the People series, dialect words and their equivalent in standard English are usefully given at the end of the relevant line.

The album climaxes with a mammoth 43 verses of Lang Johnnie More.  Epic for the mid-20th century, certainly, but not, of course, of a century and more earlier.  Apparently singing from a manuscript prompt, Strachan sustains interest in the narrative by using various vocal techniques, some more, some less overt.  He comments at the conclusion, "Noo, it's too long that."  But I would have to disagree.  In the manner of all great releases this album left me wanting more and I sought out the Topic and Folktracks issues on my shelves.  When telling a friend with whose musical taste I generally concur that I was reviewing this CD he commented of Strachan's vocal style "rather dead, no fire."  But for once we are at odds: just listen to The Stootest Man in the Forty Twa.  Not to everyone's taste, then, but certainly to mine.  Maybe yours too.