The Interface between Print and Oral Traditions 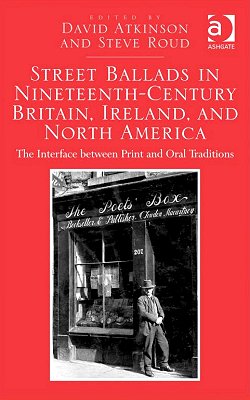 We live, so we're told, in an age of 'big data' - and data is simply a lot of facts.  Unfortunately, lots of facts - as any statistician will tell you - don't necessarily amount to any information.  This is a quandry which, I feel, bedevils this book.

In my review of the New Penguin Book of English Folk Songs, I wrote:

... the collection of a particular song from a particular singer may have been published in numerous books and several LPs and CDs, generating a significant number of Roud entries - for only one unique instance of that song by that singer.  A startling example might be that concerning Barbara Allen, which has around 1,130 entries in the Index, yet only 111 unique English ones.

This is further complicated when one adds - as is appropriate to this book - the broadside/garland/chapbook publications.  Because it is perfectly possible to find a song with dozens of Roud entries, only one of which refers to the song in the mouth of an actual traditional singer!  And clearly, there will have been many other composed songs which can be found in street literature's archives - copied from one printer to another, then appearing in books - which never appealed to 'the folk' at all, and so never featured in collections from the oral tradition.

Conversely, there are a number of songs - The Maid Freed from the Gallows, Lord Randal, Hugh of Lincoln are cited in Steve Roud's Introduction - which seem to have survived perfectly well in the the oral tradition without the help of broadside publicaion.  Other very well-known songs are in a similar position - though Steve doesn't name them.

This book attempts, as its subtitle implies, to 'engage with the long-running debate over the origin of traditional songs by examining street literature's interaction with, and influence on, oral traditions' (quoted from the introductory page).  Clearly, modern scholarship and research, plus online availability, have made masses of data easy to acquire ... but I wonder how much actual information has been revealed.  We now know quite a lot about both early- and late-period street literature, and also about songs in the oral tradition.  The problem is relating the two.  Because, by and large, the street literature data come from two periods when data on the oral tradition were in short supply.

The 'two periods' of street literature data is due to something I didn't know anything about - revealed in David Atkinson's chapter 2, Was There Really a 'Mass Extinction of Old Ballads' in the Romantic Period.  Apparently, around 1600, the State handed authority over the print trade to the Stationers' Company, a cartel of powerful London booksellers, which came to dominate the publishing industry in England.  Due to escalating production costs, the prime interests of the booksellers came to lie in maintaining for themselves the rights of ownership in a canon of profitable works.  This 'perpetual copyright' lasted until a 1774 House of Lords ruling abolished it.  The result was that the popular literature of the late-18th century was still instantly identifiable with that which had been current at the beginning of the 17th century.  It is also the reason why some 16th century 'black-letter' ballads are often so different from 18th century 'white-letter' ones, whilst some others are almost exactly the same.  And, of course, song collecting largely post-dated the demise of the 19th century broadside publishing industry.  And, due to all the foregoing factors, it can be pretty difficult to draw any firm conclusions about The Interface between Print and Oral Traditions.

Furthermore, the task would have been rather easier if all of the book's twelve contributors had actually addressed themselves to the task in hand; but by my reckoning, only Steve Roud, David Atkinson, John Moulden, Tom Pettit and Anna Kearney Guigné actually deal with this 'interface' in any detail - the others tend more towards describing aspects of the print trade in their chosen areas.

Roy Palmer gets fairly close with a chart listing Birmingham printers.  He shows that, for example, William Pratt published some 561 titles over a 16 year period, yet only 18% of these songs ever made to into the oral tradition.  In comparison, Theophilus Bloomer published only 178 titles in a 10 year career, yet 42% of these found their way into the mouths of traditional singers.  Exactly what made Bloomer so comparatively successful in that respect, compared with Pratt, doesn't seem to be discussed.

Another point of discussion pops up in Chris Wright's Scottish chapter, namely that some cultural groups felt that a printed source gave 'their' song a special authenticity, whilst others regarded oral transmission from another singer to be of far higher value.  Accordingly, this has resulted in some pretty misleading answers to collectors' questions about their singers' sources.  Similarly, Martin Graebe shows that some precise examples of songs collected by Baring-Gould or his associates were obviously learned from broadsides, but doesn't show any generalised use of this process.

John Moulden's chapter addresses the interface in a rather different way, arguing that it was the ballad sellers who were actually real actors in the 'print to oral' interface:

The link between the song, its maker and the printer who produced the ballad on the one hand, and the person or persons who were to sing it on the other, was provided by the ballad seller - who would necessarily be a singer.

Not the 'interface' the other authors in the book are discussing, but an interface nonetheless.  John also provides evidence that the Fanny Blair ballad resulted from real, appalling events of September/October 1785 in Armagh, and had actually been made into a song in Ireland, printed there and pretty certainly sung there, though never collected.  However, I'm not sure he proves that the broadside came directly from the oral version.

Really, it's not 'til we get to David Atkinson's chapter 10, The Popular Ballad and the Book Trade, that we get to any serious examination of The Interface ... as proposed on the Introductory page.  Here David examines both The Daemon Lover and Bateman's Tragedy in some detail.  Now, you'll all have heard of The Daemon Lover and may assume, as I did, that Bateman's Tragedy was an early version of Lord Bateman - but no.  It's an entirely different story, and David shows how, from a 'first known' printing in the early years of the 17th century, it can be traced through numerous printings right up to the second decade of the 19th century.  Yet we have no way of knowing whether anybody actually sang Bateman's Tragedy in the oral tradition - because it has never been collected!  It may have been kept in print to maintain the 'perpetual copyright' discussed in chapter 2, and clearly must have had sufficient sales to have kept it in print for over 200 years - but does that make it 'popular' in Child's sense?  Because it's a startling fact that, despite Child's assumption of an 'oral - manuscript - print' process, starting from the medieval oral ballads, most of the oldest items in English and Scottish Popular Ballads are actually found to be 16th century broadsides.

The chapter continues to examine The Daemon Lover, showing it to be very similar to Bateman's Tragedy in terms of structure, motifs, language, etc, yet it was seemingly unknown until a mid-17th century printing, and only lasted as a broadside until the second decade of the 18th.  However, it was re-cast in a shorter form in the mid-18th century, and subsequent Scottish printings introduced the supernatural elements we know today, and these found their way into North America where it became extremely popular.  Its subsequent Scottish popularity may have been aided by Walter Scott and Peter Buchan's work on balladry.

This review is getting far too long, so I'd better simply say that chapter 11, by Tom Pettitt, Mediating Maria Marten and chapter 12, by Anna Kearney Guigné, Old Brown's Daughter: re-contextualizing a 'Locally Composed Newfoundland Folk Song' are both superb, interesting and germane to the 'interface ...' question.  Doubtless, this is in part due to the fact that both subjects are set in fairly recent times, where the 'interface ...' can be demonstrated by verifiable facts.

Somewhere in the book, an author writes: For readers unfamiliar with folk songs ...  I was stunned!  Why would anyone unfamiliar with folk songs be reading this book in the first place?  Then I remembered the price - this 290-page hardback costs Ł70.00 - clearly it's not aimed at any folkies I know!  So it's obviously aimed at academics - but why would an academic want a book that attempts to address a subject, yet fails to arrive at any clear conclusions supported by verifiable information?  I would have thought that anyone with even a passing interest in ballads, or anyone who has had a brief look at Steve Roud's Folksong Index, would have realised that there was obviously an interface of some sort between print and oral traditions - and I don't suppose they would need to spend 70 quid to realise that any precise details of this interface would be almost impossible to prove, given that the data relating to the print trade and to folksong collecting are largely from different chronological eras.