A Gypsy History of South London and Kent
by Simon Evans 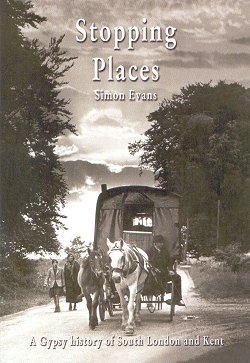 I have to confess to having been entirely unaware of the existence of the University of Hertfordshire Press before receiving this book for review.  But a quick look at their website - www.herts.ac.uk/UHPress/UHPress.html - tells me that they have a fairly substantial catalogue of more than 50 books to their name ... and, most interestingly, from our point of view, more than one third of them are about Gypsies and Roma.

Simon Evans' name will be known to many of our readers from his work with and about Kent Gypsies and Travellers, particularly his work with BBC Radio Kent (some of which has transferred to National networks), and its really excellent website - www.bbc.co.uk/kent/voices/index.shtml - which is well worth a visit.  His Romany Voices project won a Sony Radio Academy silver award in 2004.

Simon's book (pp.176, paperback, Ł14.99) is up to the same high standards - but it's extremely difficult to find appropriate superlatives to use in describing it.  Because it is not wonderful, exciting, enthralling, etc.  It's depressing, harrowing ... sometimes even downright sickening - as, indeed, it should be, given the awful story it has to tell.

Readers of this magazine are unlikely to be surprised by the tale of how the Gypsy people have been treated in this country, down the centuries - but the first-hand accounts of actual events, including newspaper reportage and minutes from Council meetings, bring the whole brutal story into horrifyingly sharp focus.  The 170 or so superb photos reinforce it for those readers with limited imaginations.

In a way, it's a pity that the book's subtitle is so accurate - A Gypsy History of South London and Kent - because if the area is not well-known to the reader, the later chapters describing the ... atrocities is not too strong a word, perpetrated there, sometimes seem a little too dense and detailed.  I often desperately wanted to flip on a few pages for a change of air or location.

We are now too far away from the 19th century and earlier times, to adequately judge how the Gypsies might have had a better time of it, had they acted differently, but it does seem to me that they have been cruelly treated by changing circumstances, none of which have been of their own making, in the latter half of the 20th century.  With their traditional sources of income completely removed by mechanisation and changing farming methods, many turned to the scrap business ... and even the best-run scrap yard in the world is an eyesore.  Given the circumstances which Simon describes so accurately here, it's impossible to imagine even the most conscientious of Gorgios managing to make a living for his family in this way without attracting the ire of his neighbours in the settled community.  Imagine a life where, unless you have the 'good fortune' to have a hard-standing on one of the pitiably few Council sites, it is physically impossible for you to avoid breaking the law within about 24 hours!

It occurs to me that, had they had the foresight, Gypsies in the 21st century might have been able to retain much of their valued lifestyle, culture and independence, and be respected and valued members of society ... as mobile computer technicians, systems analysts, webmasters and the like - much as the country of their origin, India, has become.

This is a book that ought to be required reading for every school child in the country.  I can imagine very few who, having read it, would think of shouting "Gyppo! Pikey!" again.