A record where the presentation belies the content.  Everything I've seen (CD sleeve design, Press/biog sheets, photo, even the band's name - yes, the 'o' does have an umlaut!) is designed to give the impression of a hard, cocky, exciting mob. 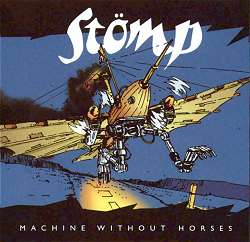 The excellent sleeve artwork (by Christof Heuer) marks the CD out as different from the run-of-the-mill English dance band records, and the photo included with the press kit shows a black leather clad quintet glowering, shouting and flicking the V's at the camera ... if these were the '70s, they might even be considered trendy, a la Oysterband.

Given all this preparation, it is perhaps unfortunate for the band that the music to be heard on their CD is not at all what one has been led to expect ... in fact, it's downright ordinary.  It might be argued that concertina, violin and plucked dulcimer are not the ideal choice of front-line for a band called St—mp.  And the back-line of drums, bass and guitars doesn't sound as if it would upset too many neighbours, either.  It's all terribly limp and middle-of-the-road ... and quite unobjectionable, had it not been for all the hype.

There are some nice tunes here: Robertson's Hornpipe, Machine Without Horses, Art Wooton's Quadrille, The Blarney Pilgrim, to name those that appeal to me, but they all progress into a sort of sub-jazz improvisation by the second time through - which rather misses the point of choosing to play good tunes to start with, since they all end up sounding rather the same.

One which is new to me is Brudmarsch Til Per Och Anna a handsome Swedish march tune of great dramatic potential - very much in the Old Grenadier mould.  But here it just falls off the end of the instruments as if the band were sight reading.

Several of the other tunes are either self-composed or contemporary, and there are a few other foreign ones to keep the brudmarsch company.  All are played in much the same way (a good point) but with no discernable style (a bad point) except for the tendency to degenerate into rather pointless improvisation.  Worse, the music is emotionless and dull - it certainly does not stomp ... or st—mp.