English Traditional Songs and Singers from the Cecil Sharp Collection

It is now exactly one hundred years since Cecil Sharp collected his first folksong, the well-known Seeds of Love from the Hambridge gardener, John England. 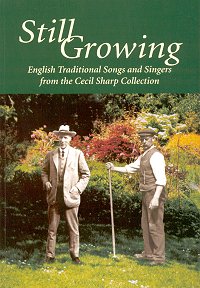 To commemorate the event the EFDSS and Folk South West have issued this collection of 50 songs collected by Sharp in southern England.  (Surely it should have been 100 songs to commemorate the century, or are we to get a further 50 of Sharp's Appalachian songs in a follow-up volume?)

A quick check shows that about 29 of the songs were included in the Maud Karpeles' 2-volume edition of Sharp's collection (Cecil Sharp's Collection of English Folk Songs.  London, OUP.1974), which leaves us with some 19 songs that appear here for the first time.  But, that's not all.  The book comes with an extremely good overview of Cecil Sharp, his times, his work and his legacy by Vic Gammon; biographies of the singers, mainly by Bob and Jacqueline Patten, though Paul Burgess, Keith Chandler and Andy Turner have also chipped in where necessary; photographs of many of the singers (including a stunner of James Prole, complete with straw hat and nicky-tams, which includes a portion of Sharp's shadow in the picture); notes to the songs, and, for good measure, an extensive bibliography of works by, or about, Sharp, which has been prepared by David Atkinson.  In all it's quite a book and one that is most timely, now that Sharp and his work are currently being reassessed by any number of people.

What of the songs themselves?  Some are quite well-known, though the versions given here are often set to interesting, and lesser-known, tunes.  These include The Seeds of Love, John Barleycorn, Death & the Lady, The Banks of Green Willow, The Foggy Dew, Jack the Jolly Tar, The Bold Princess Royal, The Banks of Claudy etc.  Occasionally there are oddities.  Come Buy My Fine Herrings, for example, which sounds to me to have been written for the stage, or the Minstrel song Long Tail Blue, which should surprise those people who believe that Sharp only collected 'English folksongs'.  Incidentally, here the editors have changed the word 'nigger' into the more PC 'people'.  I suppose that I shouldn't really complain; some 30 years ago I recorded a finely sung version of the song Old Johnny Bigger from an Oxfordshire singer.  This version also contains the same word, and, over the years, I have never felt able to include the song on an LP or CD.

William Durkin's Dream of Napoleon is a bit of a rarity, although it was also sung by the splendid Sam Larner many years later, a fact that should, perhaps, have been mentioned in the notes.  Shepherd Hayden's O Once I was a Shepherd's Boy seems, however, to have been unique to this one singer and is a splendid find.  I am also glad to see Lucy White's Farewell He, with its 'We'll be all be smiles tonight' chorus, which comes from an American song written by T B Ranson in 1879.  This chorus was also included in the version of Farewell He that I recorded from old Tom Newman of Clanfield in Oxfordshire.  At the time I felt that Tom must have picked up the chorus from an early recording, but Sharp's 1903 set suggests that the chorus was added at a much earlier date.

At times there are oddities in the verses.  What, I wondered, were the 'spencers' mentioned in Emma Overd's song I Wish I Had Never Known?  According to Partridge, a 'spencer' was an early 19th century term for a shot of gin, but this is certainly not the meaning in the line, 'Some do wear spencers and I don't wear none'.  Luckily another dictionary came up with the definition that a 'spencer' was a short jacket named after, and popularized by, one Lord Spencer.  And what of The Dilly Song which, as the notes suggest, 'has puzzled laypeople and scholars alike'?  I agree that, 'it must take the prize for the folk song burdened with the largest quantity of nonsense written about it to explain its secret meaning'.

Likewise we find some fascinating facts scattered throughout the singer's biographies.  Did you, for example, know that John England emigrated to Canada in 1911, dying there c.1939?  Or that one of his grandchildren later became Bishop of Toronto?  Or, for that matter, were you aware that Cecil Sharp called doughnuts 'Sudden Death'?  No, well have a look on page 53 to discover the 'high jinks' that took place at Hambridge Vicarage when the vicar's wife was away from home!  According to Louie Hooper, 'I and my sister Lucy White... spent many a happy hour singing to him (Sharp) at the Vicarage, Hambridge...  I liked him very much...it was a happy time'.

Vic Gammon comments on the unsatisfactory nature of the Karpeles' edition of Sharp's songs and calls for the entire Sharp collection to be printed in an edition similar to that which has appeared in Scotland for the Greig/Duncan material.  I could not agree more, though, like Vic, I think it unlikely that we shall see such a work within our lifetimes.  We also need a new and full biography of Sharp.  For too long we have had to rely on a hagiographic work that sought to promote a myth, rather than a man of flesh, blood and human frailty.  Vic calls Sharp, 'this strange and fascinating man' - sentiments, I think, that stem from our true lack of understanding.  In her short preface to Still Growing, Shirley Collins seems to perpetuate the myth that Cecil Sharp stumbled across John England almost by accident - she calls it, 'this fortunate chance' - when it seems likely that Sharp had been forewarned of John's song by John's employer, the Reverend Charles Marson.

Still Growing is a small book.  But it is a start.  Ably edited by Steve Roud, Eddie Upton and Malcolm Taylor, it brings the story up to date.  It turns Sharp's 'informants' into real people and, almost as a bonus, it provides easy access to fifty fine and singable songs.  Yes, we do need more scholarly work on Sharp.  But let us not forget, in the midst of all this scholarship, that Sharp's real worth lies with the songs that he so successfully collected.  They are his real legacy.  Now, let's hear them being sung again.