From the Heart of the Tradition

Here it is then - Topic's first new recording of a Scottish traditional singer since (as far as I can tell) her mother, Belle Stewart's Queen Among the Heather LP (12TS307), back in 1977 - 23 years ago!  It is quite astonishing to realise that all those records we still cherish were the product of a just couple of decades - roughly 1960 to 1980.  There have been other, more recent issues - The Voice of the People being the most obvious - but these were all releases of recordings made long before.  But enough of history - what has the first year of the new millennium have to offer us?

A very nice record, by the look and sound of it, containing a few of the same songs Belle sang back then - in fact, both start with Queen Among the Heather - and Twa Brothers, Late Last Night (The Nobleman's Wedding) and Here's a Health to all True Lovers are also common to both large and small disc. 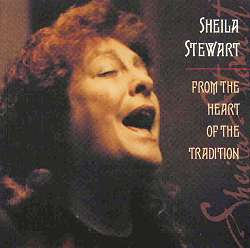 Thus it's possible to easily compare mother and daughter's singing - not as regards better or worse, but rather to see how songs have changed from mouth to mouth, from one generation to the next.

This sound clip of first Belle and then Sheila singing the second verse of Queen Among the Heather is a good illustration of the differences of approach.  Belle's voice is rounder, softer, perhaps fuller, and she sings slightly faster and without obvious emotional inflections in her voice.  She was also eight years older at the time of recording than her daughter is now.  Everyone says how like her mother Sheila sounds now she's older, and I certainly thought so when first listening to this CD.  But put the two side by side, as here, and the differences in Sheila's performance are quite marked.  She tends to singer higher, slower, and with a more obviously passionate style of delivery - the conyach, as she calls it.  Her voice is not just higher (and she's singing lower these days than she did as a young woman), but also sharper and thinner, with rather more of that reedy sound they both share.  The truth is that both women have developed a style of singing and a tone of voice which match each other almost perfectly.

Sheila's approach to phrasing is more intricate and perhaps more rhythmically varied; breaking words down to their syllables - indeed, often adding syllables - to emphasise a point in the text or a turn in the tune.  Her discussion of this very aspect of her singing is well covered in the booklet, and makes fascinating reading.

Even more fascinating is her account of being 'taken up' by her Uncle Donald (Belle's elder brother, who'd got the ballads from his father and passed many of them on to Belle) and of being deliberately taught the songs from a very tender age.  Because of her parents' extensive travelling in their earlier years, Sheila was looked after by Donald and his family for most of the first 15 years of her life.  In fact - provided that her interpretations of events which happened over 50 years ago, when she was a child, are accurate - she appears to have been groomed by the family to be what she now describes herself as; the inheritor of the entire family tradition of songs, stories, lore ... a repository for their culture.  If this is truly the case, rather than just projection, it represents an extraordinary act of autonomous cultural statement in the face of a changing world, and indicates a level of self-awareness on the family's part which is quite at odds with what is usually considered normal for traditional performers.

The recordings by Doc Rowe are exceptionally good - a very clear sound with plenty of presence - and they are matched by the quality of Sheila's singing.  67 minutes is quite a long time to be exposed to a solo unaccompanied voice, particularly in this day and age, but she sounds fresh and interesting on almost every track.  It's hardly possible to discuss every one of the 20 songs, so I'll content myself with saying that I particularly like (for all kinds of complicated reasons)

False False, Glencoe, Tifty's Annie, Mantle So Green, Willie Leonard, Inverness-shire, Health to All True Lovers, Convict's Song ... almost all of 'em, in fact!  Here's a snatch of the last of this list (sound clip).

Wi' My Dog and Gun (Moorcocks) is, I think, pitched slightly too low for comfort, and one other song is also uncomfortable, or so it seems to me.  Ewan MacColl's Moving-On Song is the only non-traditional inclusion (or, to be accurate, the only obvious one, since several others are from known composers - but these have passed through the Travellers' oral filter and are barely distinguishable from the traditional ones).  The Stewart family's involvement in the creation of the Travelling People Radio Ballad is well known, as is the contention that not a word appears in those songs which didn't originate in the mouth of a Traveller.  Thus, this is a song which Sheila likes and respects, and associates with positive encounters with non-Travellers.  That said, I still think that she sounds uncomfortable singing it.  In fact, I don't think I've ever heard anyone sing it convincingly except MacColl - or someone copying his way of singing it!  Shela sings 90% of it perfectly well, yet falls - as they all do - on the final "Go - Move - Shift" line.  Traditional songs just don't end like this, and a traditional singer just doesn't know how to deal with it effectively.

The booklet is a real treat, and I read all 36 pages of it, avidly, in one sitting .  As a compiler and editor of such things myself, I envy Doc Rowe his opportunities of discussing each song with a 63-year-old, intelligent, enthusiastic and aware singer like Sheila Stewart; of finding out how she came by them and what they mean to her.  I envy him the hours of conversation with someone he knows really well, who he can ask the sort of questions which might daunt another collector in different circumstances.  And, I have to say, I envy him the ability to distil it all and present it to us in such an elegant and natural way.

I can find no fault with the entire booklet, except that one passage from Sheila's conversation on page 12 gets repeated on page 15.  And, since Doc Rowe is perhaps better known as a photographer than sound recordist, it is rather surprising to find that there are no photos in the booklet - and particularly disappointing that there are no historical ones.  And this may be just me, but I do think that - of the three photos of Sheila on the front and back of the CD - two of them really don't look terribly much like her.  But who cares very much, when it's still possible to get in the car and go and see her live at a club, concert or festival?  She's probably among fewer than half dozen other singers of this calibre still singing in mainland UK ...

So - as the latest of Topic's recordings of traditional music since the company reinvented itself as a publisher of such stuff in 1996 with Hidden English (TSCD600) - this present offering is right up to standard ... and its booklet might actually be the best I've ever read.  I eagerly look forward to their other releases (Sam Larner and Walter Pardon later this month and Harry Cox and Joe Heaney in September) in hopes of similar quality.  When Topic do the job properly, they really are unbeatable.