Good Luck To The Journeyman

The Yellow Handkerchief;  Wexford Town;  When the Nightingale Sings;  The Song of the Thrush;  The Maids of Australia;  Camden Town;  Dolly Dimple;  Hail the Dewy Morning;  The Oyster Girl;  The Young Sailor Cut Down;  The Trombone;  The Tarry Sailor;  A Group of Young Squaddies;  The Crab Fish;  The Game of All Fours;  The Old Miser;  Riding Down to Portsmouth;  The Banks of the Nile;  The King of the Gypsies;  La de da de da;  Lovely Joan;  The Roving Journeyman;  The Trees They do Grow High;  McCaffery. 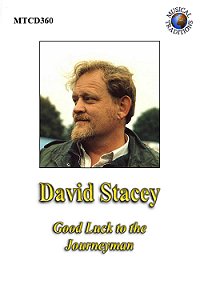 Not a name I was familiar with, but after hearing this CD, I’d certainly take the chance to catch him live.  I think a brief bit of biography might be appropriate.  In his late teens David found himself working as a woodsman and frequented the local pub in the evenings to keep warm.  The pub was the haunt of Travellers, who “tolerated” his singing.  He started paying regular visits to Masada in Israel to work on an archaeological dig and eventually returned to the UK, where he worked on the Kentish apple harvest every autumn, returning to the dig for much of the rest of the year.  Many of his fellow harvesters were Travellers, and a number of them were singers – some of them excellent.  Largely because he made his living in the same sort of way as they did, he was accepted as a singer and the singers would share their songs with him.  As a result, over 20 years or so he picked up a lot of the 'Traveller style' of singing as well as the songs.

The CD was originally recorded (professionally) in the 1970s, as a gift to an old girlfriend.  He’s rarely sung in folk clubs, preferring the craic in pubs and informal gatherings, and I have no idea how he sounds these days, but if he’s half as good as he is on the recording, he’d be worth hearing.  His singing is clear and good, and very much in that Traveller style.  The CD has 24 tracks, virtually all traditional, and the vast majority learned from Travellers, although a few came from fellow archaeologists while he was in Israel.  They form an eclectic mix, ranging from classic ballads and songs from the Traveller repertoire to humorous songs, even including one which I always thought was written by Miles Wootton (a version of La Di Dah Di Dah).

It’s accompanied by the usual MT booklet, which gives a full background to the singer and his life, as well as to the songs, plus full song texts, all researched to the high standard that’s a hallmark of any MT production.  David’s very easy to listen to – not always the case with singers of this type – and his repertoire’s lively and entertaining.  What more can you want?

One of the best recordings I’ve heard this year.