Plenty Brass and a Bonny Lass 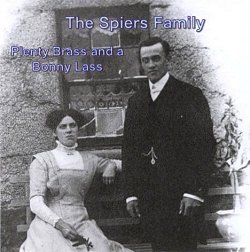 Tom Spiers himself has been on the folk scene ever since attending Aberdeen Folk Club in the early 1960s.  He became one of The Gaugers with the late Peter Hall and the very much alive Arthur Watson, who were first recorded by Topic in 1976 (Beware of the Aberdonian).  Their further recordings on cassette, later reissued by Sleepytown, came to an end with Peter Hall's untimely death in 1996.  Since then Tom and Arthur have performed and recorded with Pete Shepheard (We Smiled As We Cam In, Springthyme 2005), but Tom also released a solo album in The Tradition Bearers Series (Allan Water, 2002), reviewed on Musical Traditions by Vic Smith (19.6.02).

Over and above his fine singing voice he has the skill to accompany himself on the fiddle, giving songs of haunting intensity such as the version of Bogie's Bonny Belle that Vic so much admired ('The emotional impact of that singing stays with me to this day').  But there was another feature of his performances that Vic also noted: 'It could be the repertoire of a traditional singer'.

If the definition of a 'traditional singer' is 'one who has gained his repertoire from other 'traditional singers', then Tom fits that bill, having learned directly from the likes of Jeannie Robertson, Lizzie Higgins, Davy Stewart, Jimmy MacBeath and Daisy Chapman.  But over and above that he has absorbed, via his own researches and those of Peter Hall and Arthur Argo, the rich variety of North-East song from an area which had contained the 3000 songs of the Greig-Duncan Collection.

Over a hundred years ago, Gavin Greig, the great Aberdeenshire folksong collector was of the opinion that the concert-hall and the platform would be the death of 'real' folksong, for only the boldest and strongest singers would perform in such circumstances (and the paralysing microphone and recording studio were yet to come).  Perhaps he was premature in his misgivings, but there is a tendency now to judge song and singers in this 'performer' way, forgetting that for most people, singing (and especially 'folk' singing) is what they do when hoovering, or washing-up, or driving, or getting the bairn to sleep, or whatever.

Perhaps most modern recordings, especially by groups, are 'performances'.  This current CD is not like that; indeed it is like listening in on his family singing in their kitchen.  Tom is skilled at recording in his own studio, but these tracks have not been altered to a 'performance' standard.  Open-mouthed, I have sat in elsewhere on recordings of professional singers, watching all flaws and blemishes removed from oscilloscope tracings, and modifications of overall sound quality.  These tracks have undergone no such treatment, and have a remarkable intensity and clarity.

This CD is by 'The Speirs family', i.e. Tom (vocals, fiddle, tenor guitar), his wife Maggie (vocals) and daughter Emma (vocals), and offers a range of songs, almost all from the region, from old favourites such as versions of The Cruel Mother and The Flower of Northumberland, and the much less familiar such as Marnan Fair and O Bit I'm Weary.  As can be seen from the succinct Notes, ten originally appeared in the Greig-Duncan Collection, some being learned from 20th century local singers, as were a number of the remainder.  The Notes are to the point, if brief, and usually give informative sources such as the above Greig-Duncan, although they repeat the Traveler confabulation that John Skinner's Yowie with the Crookit Horn, a tender poem explicitly about a lost ewe, refers to an illicit still (an interpretation refuted by that doyen of Scottish balladry, Will Walker, long ago).  No origin is given for their final song, Helen Schneyer's My Flower, My Companion which Maggie learned from her when visiting Norman Kennedy in Vermont; (one account on the Web is that Helen learned it 'from Craig Johnson of the Double Decker String Band, who learned it from an old recording of Asa Martin, who lived near Covington in northern Kentucky'.  So now you know).

Having listened to Tom for half a century I am biased, considering him the best of our singers, often inimitable and always moving (see the effect of Bogie's Bonnie Bell on Vic Smith above); his singing and fiddle playing here does not disappoint in any way.  His Greenland, for example, has this haunting quality and his unaccompanied Tifty's Annie is a lesson on how to handle a long ballad.  Although Maggie has only been singing publicly since she won the major Buchan Heritage competition at Strichen in 2008, and Emma for just over a year, they have been given the opportunity to lead on more of the songs than Tom.  I particularly enjoyed Maggie's Marnan Fair and Emma's Time Wears Awa, both moving songs of love

It is interesting, however, that the Spiers feel the need to have a tenor guitar accompaniment for five of the songs, for phrase lines tend to be held within the bars reinforced by the tempo.  Tom's fiddle accompanies only another four songs, but in a typically accommodating, fluid manner.  (He accompanies their Schneyer final song on an open Bb tuning so effectively that at first I thought was listening to one of the small organs beloved of evangelist singers).  Choruses and harmonisation by all three are used on most of the tracks, although, to be honest, this is uncommon in the tradition they otherwise represent so well.

I gather that this is to be the first of a Millseat Barn series, and I hope that future issues will correct some of the lack of information.  Who are the couple on the front cover?  Why are the words of the songs - although sung very clearly - together with a glossary, not printed?  For the Scots is first class and totally coherent with itself; these are artists completely at home in their own idiom.  A link to good website with this information has been provided (at: www.spiersfamilygroup.co.uk), but that requires enquirers to have access to the Web.  The CD was, however, originally compiled simply to have something to give or sell at their performances, but it deserves a very much wider audience than that.  Love Songs and Life might have been a better description of the majority of their songs than the Plenty Brass and Bonny Lass title taken from the Greenland song.  The Spiers family stand firmly in the singing traditions of the North-East of Scotland and I hope there are many more recordings to come.