It was 1970 or 1971, I can’t remember which.  I was in the Victoria Bar in Kinross during the TMSA festival.  There was an unofficial daytime singaround going on.  I remember a man wandering in.  It looked to me as though he had stumbled on the event by chance. 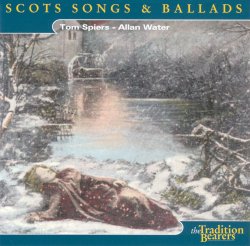 His gabardine raincoat did not seem to fit with the folk festival dress code of the rest of us.  He didn’t seem to acknowledge anybody else but went up and bought his pint.  Unlike the others at the bar, he was not turned to the singing, but stood concentrating on his drink.  He was in mid-mouthful later on when the self-appointed compere, John Watt announced, "Richt, we’ll hae a sang noo fae Tam Spiers."  The surprise announcement caused him to spill the beer down his coat and there was much wiping with his handkerchief before he turned round and gave us his Bogie’s Bonnie Belle.  The emotional impact of that singing stays with me to this day.

Later in the weekend, I was to hear Tom singing and playing fiddle as a member of the Aberdeen trio, The Gaugers.  He has made a number of fine albums as a member of that very fine band, but this is his first solo offering.  In the notes to this album, Tom notes that he was lucky to be in the right place at the right time.  He started attending Aberdeen Folk Club in 1962 when it was possible to hear and absorb from the likes of Jeannie Robertson, Lizzie Higgins, Davy Stewart, and Jimmy MacBeath.  In particular he seems to have learned a number of songs on this album from Daisy Chapman.  In those years there was also Arthur Argo to learn much from in that circle and his fellow Gauger was the noted Scots song collector, Peter Hall.  Understandably a broad interest in what was available in folk clubs was to narrow itself down to the song traditions of his own region.

This album shows that Tom has made the most of his opportunities.  The repertoire that he has established for this album shows the rich variety of the songs of North-East Scotland.  It could be the repertoire of a traditional singer.  There are traditional ballads and lyric songs, bothy items and cornkisters, sentimental songs and some that are possibly of music hall origin.

Tom’s singing is always full of interest  His voice has a very pleasing tone and timbre.  His timing, projection, pace and phrasing are very pleasing and his every note underlines his love of traditional song.

Roughly half the songs are delivered unaccompanied, with Tom singing the remainder to his own fiddle accompaniment.  In The Jaunting Car and He’ll Nae Tak Liver he is largely playing a second melody line against his voice with link phrases of the tune of the last line.

Elsewhere, particularly in slow tempos, he employs an effective combination of double-stopping and tune played against open drone strings.  There is never the feeling that the accompaniments are intruding.  Singing to one’s own fiddle accompaniment is rare, more common in North America than over here.  It is practically unknown in Scotland (sound clip - Rhynie).

The album has been recorded by Tom himself and generally he has made a very pleasing job in capturing the fine spirit of his own singing in a well-programmed album.  If I were to offer a criticism of the recording, it would be that there are times, particularly on The Sailor Deceived and Depression where the reverb on the voice sits a bit uncomfortably against the more straightforward recording of the fiddle.