This 64-page book containing 27 black and white photographs is about the life and times of Ron Spicer, singer and musician from Sussex and is published in aid of St Catherine's Hospice, Crawley. 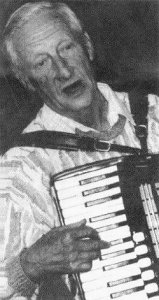 Many of us traditional music afficianados had the pleasure and privilege of knowing Ron and sharing his music for a few brief years, and this book sketches in some cultural and personal background which help us understand the man and his music.  A general interest book rather than an in-depth musical or social analysis, it contains a perceptive and appreciative contribution from Vic Smith, together with two songs written as tributes to Ron, but it is largely the words of Ron's widow Doris, edited and compiled by Dick Richardson.

What comes across very strongly from these recollections is a sense of family and community.  Ron's father was the singer George Spicer, recorded by Topic in the 1970s (Blackberry Fold - 12T235), and whilst following in family footsteps, almost literally, as a gardener and herdsman on the same estates as his grandfather and father, Ron ploughed his own furrow when it came to music.  Personally, knowing Ron primarily as a singer who accompanied himself on the accordion, I was unaware of the breadth of his musical activities, playing in the pubs on a Saturday night with his father in earlier days, and for local Harvest, Christmas and May celebrations until very recently.  In later years, Ron has been a ubiquitous and welcome performer at many traditional music gatherings, and he and Doris have been an enthusiastic and supportive audience for many other singers and musicians.  Although Doris doesn't consider herself a singer, both she and their two sons managed a song at the sing-song after Ron's funeral.

Ron was also known by many people outside the field of traditional music through his showing and judging of cattle and dogs.  I'm sure many of them would appreciate his music too: unfortunately, this book contains no discography to help them find his recorded output.  It is apparent that plans were afoot to produce a solo album of Ron, but at present he is to be heard on the Sussex collection When the May is All in Bloom (Veteran VT131), including his deeply moving version of The Constant Lovers, and The Keys of Canterbury (cassette - label unknown).  As Vic Smith affectionately says in his foreword to this book: "He was a soothing, coaxing singer ...who seemed to say 'Come along and listen to these songs, they are really good!'"