Songs from the Sperrins 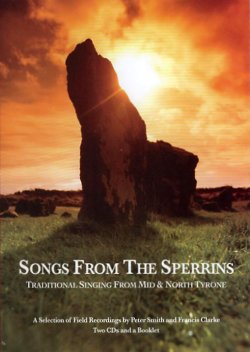 Well, this was a bit of a surprise when it dropped through my letterbox on Sunday morning ... the local Posties attempting to clear the backlog of stuff not delivered during the past ten days of snowy weather - and to earn some overtime!

The package is a very sturdy DVD case (23mm thick) containing two CDs and an 8mm thick 100-page booklet.  Sadly, in my view, the case is one of those where the two CDs are stacked one above the other, so you can't get to CD 2 without first removing CD 1.  The atmospheric cover and booklet photo is of part of the Beaghmore Stone Circles near Cookstown, Co Tyrone.  They were discovered during peat cutting in the 1940s, and the site consists of 7 stone circles.  All of the rings are associated with cairns and a stone row runs towards these cairns.  Track 21 of CD 1 is Geordie Barnett's song about them, sung by Joe O'Neill.  The Sperrins of the title are the Sperrin Mountains which lie to the north of the area where the songs were collected.

Beaghmore Publications, who produced the CDs, appear to have no postal address or web prescence.  The project was funded by Rocwell Natural Mineral Water Ltd, of Pomeroy, Co Tyrone, and the CDs were sent to me by someone from the Institute of Irish Leadership, also of Pomeroy ... so this is not at all your usual Irish music publication.  Peter Smith and Francis Clarke recorded these songs in 1980, the late-Eighties, and early Nineties, when they were researching 'fragments of songs, prayers, sayings and field names' in Irish - but the songs themselves were only 'a by-product of the main focus of our study, namely the last days of the Tyrone Gaeltacht'.

Peter Smith states in the booklet that they 'met many more singers than are represented here', and that the selection was based firstly upon recording quality and secondly on performance quality.  Certainly the recording quality, digitally re-mastered by Harry Bradshaw, is excellent throughout, given that these are field recordings.  But I'm a little less enthusiastic about the performance quality.  We are told that the average age of

the singers was 75-80 years, but I've heard many a singer of that age who can rivet your attention with no trouble.  In this collection, I got to track 5 - Ita Loughran singing You Rambling Boys of Pleasure - before I heard someone who seemed to understand and care about what she was singing; too many of the other singers appeared to have little emotional engagement with the stories they were unfolding.

I'm pleased to say that Ita Loughran has two other songs on the CDs, and that Jimmy McGillion, Hugh Quinn and Sara Ann McCullagh all have a bit of life to their singing; but it's rather sad that the rest of the singing is rather dull and uninteresting - to me, at least.

The booklet, like the rest of the publication, is a little odd - or very odd, depending on how you look at it.  At first glance it looks to be well researched, though the focus seems to be centred on Co Tyrone, with some information about other singers and publications in Ulster, and a little more about those from Ireland as a whole.  This seems perfectly reasonable - though a wider remit would, I think, have been more interesting.  But if this was the intended scope of the booklet, it is peppered with anomalies.  I won't attempt to list them all, but a couple of early examples will show what I mean.  CD 1, track 11 is The Gallant Dragoon, sung by Jimmy Devlin.  The song is cited as Roud 5386, yet the briefest gance at Roud's Index would have shown Peter Smith that it is usually known as More Trouble in my Native Land.  He would also know that it was written by Tom McGuire, was widely sung in England, and that Roud has only one Irish instance, that of Mrs Graham, of Crumlin, Co Antrim.  Whereas his only information is that it was published in a book called Old Come All Ye's in 1935.

In a slightly different vein, CD 1, track 18, The Beggarman, again sung by Jimmy Devlin, has copious notes, but no Roud number, and it's not described as a Scottish song.  He doesn't know that, of Roud's 93 examples, only three are from Ireland ... and so misses out mentioning Robert Cinnamond's or John Reilly's versions.  He does know that it was sung by Maggie and Sarah Chambers and that Keith Summers' recording of Maggie Murphy's performance appears in Topic's VotP series, but doesn't know about Maggie Murphy's Veteran CD, or her songs on MT Records' The Hardy Sons of Dan.  "Well, why should he?" you may ask.  Well, because he does know about MT's Kevin Mitchell records, cites his Hills of Glenswilly, and Roly Brown's MT articles on Willie Reilly and His Colleen Bawn.  In which case, it seems extraordinary that there's no mention of MT Records' The Hardy Sons of Dan - a very similar sort of publication to this in many ways, and situated just across the county border in Fermanagh.  Even the 'Irish only' criterion breaks down when he gives full details of Fred Jordan's recording in the notes to The Dark Eyed Sailor!

The booklet, I have to say, is beautifully produced, clearly printed and well laid out.  It even used full colour printing to add an 'aged' look to the pages, with yellow fading around the edges.  This must have cost a packet for a 100-page booklet, and would, I guess, have been impossible without the Rocwell funding.  That said, it's a terrible shame that it has been printed with equal margins which, when bound as it is here, make the inner margin invisible, together with the first and last few letters of many lines - unless you want to pull it so far open as to endanger the glued binding altogether!

There is an admirable 3-page 'Profiles of the Singers' section, and several nice photos of some of them scattered through the booklet's pages, yet, for the most part, his song notes are about other books and publications the songs have appeared in.  There's even a full colour map of the area ... yet the areas marked out with red, blue, purple and green outlines are not explained - and so are a bit pointless.

The reason that the booklet is so large is not that it uses large type (about 6.5 point, by the look of it) but because there's a staff notation of the tune of every song as well as the texts.  In the 'Editorial Method' section, Peter Smith writes:

It has not been felt necessary to replicate in our transcriptions of the airs of the songs every nuance of our singers' performances since the recordings do this in a more accurate manner than staff notation might ever convey.  However, in view of that fact that the prime motivation behind this collection is to breathe new life into old songs, it has been felt necessary to provide transcriptions.  In some cases, the songs have been difficult to transcribe. However, every effort has been made to render them as close to their original settings as possible.

This really is one of the strangest pieces of reasoning I've come across - you can hear what they're singing on the CDs, so we've also provided admittedly inacurate transcriptions as well.

So - all in all - a bit of a disapointment, given the time, effort and money that's obviously gone into it.  What a shame.