Songs of the County Down 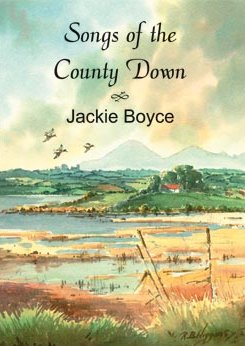 Jackie Boyce is a singer, musician and collector from Comber (of the acclaimed potatoes) in County Down and a man who, in the late 1970s, began his mission to track down every song he could find which emanated from said county.  Issued just over a quarter of a century later Songs of the County Down bears full testimony to the extent of his energies though he does admit that the selection only represents a mere portion of his discoveries.

Fortunately Jackie found a publisher that cares more than a jot about presentation, Laurel Cottage of Donaghadee, who publish Ballyhay Books (www.cottage-publications.com), producers of splendid illustrated books on various Irish localities, as well as esoteric publications such as a photographic history of Belfast City Hospital and Footprints in the Sea (‘Entertaining memories from the fascinating and multi-faceted life of the well known marine biologist, Davis Cup tennis player, Viv Gotto’) - and I kid you not about the last one.

The upshot is that Songs of the County Down, from its cover-wrap reproduction of a watercolour scene of Strangford Lough by R B Higgins to its meticulous typesetting and use of a 1743 map of the region, is a thoroughly engrossing book and one which provides not only a rich source for singers, but an intriguing account of the topics which provided inspiration for the song-makers of County Down.

Jackie has divided his material into seven geographically-based chapters, as well as including a catch-all ‘Miscellaneous Songs’ section, a glossary of uncommon words found in some of songs overall (a particular favourite is ‘snool’, meaning to ‘snub’ or ‘keep in subjection’), a long account of the extraordinary 122-verse ballad Honest John, a very detailed section of acknowledgments made to sources of the songs, and (hallelujah!) an index.

To provide a snapshot, let’s take one section at random, ‘Carlingford Lough and The Mournes’.  This begins with As I Was Going to Newry, learnt from the singing of Tommy Sands (who got it from his parents) and includes the memorable couplet:

If she takes a bottle, that’s alright with me,
If she doesn’t touch it, all the more for me.

This is followed by the more familiar Newry Town which Jackie acquired via the singing of John Moulden, whose name appears regularly within the book’s pages as a source for a wide variety of songs.  The next song, The Races at the Bridge of Mayo, includes a characteristically apposite note from Jackie about the handicaps applied in horseracing while, further on, one will encounter Percy French's The Mountains o’ Mourne, an indicator that this collection is not limited to songs which would determinedly be categorised as traditional.

There are songs transcribed in the Ulster-Scots dialect too, such as Betty MacBlaine, and no fewer than three accounts of the battle of Dolly’s Brae.  Sources such as Robert Huddleston’s 1846 Book of Poems and Songs and the works of Hugh McWilliams are well represented.

Transcriptions of melodies or a brief note on its source are provided whenever Jackie is actually cognisant with the tune (in some cases he was just provided with handwritten lyrics with no further details available) and notes on songs vary from simple statements of their derivation to lengthy descriptions of their subjects (viz The Wreck of the Newcastle Fishermen).

All told, Songs of the County Down is an utterly absorbing work which offers an extensive insight into the subjects which fascinated songwriters in the past and, hopefully, will see some previously long-forgotten meritorious songs reinvigorated by a new generation of singers.