Melodeon, Harmonica and Concertina Classics from 1910 to 1950

This very pleasing release features a wealth of Scottish and Irish dance tunes played in varying tempi, including (unusually) a couple of waltzes and a foxtrot.  Melodeon players predominate (and three Scottish Champions among them) with ten of the nineteen tracks, followed by harmonica with seven. 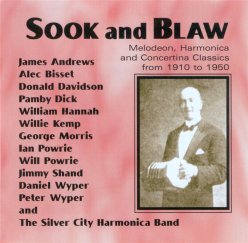 As expected, many of the 'greats' of the pre-war Scottish country dance scene are represented, but there are also a couple of pleasant surprises, in the form of a pair of English concertina tracks by George Smith Morris (known as 'The Buchan Cheil'), and another by the exuberant Silver City Harmonica Band, from Aberdeen.  This latter sits firmly within that widespread, but little recorded urban tradition, whose English representatives include groups from Widnes in Lancashire, and the prolific Selma Mouth Organ Band.  All tracks are sourced from 78 rpm shellac discs of varying rarity.  The music itself can hardly be faulted, although the choices are occasionally a little uninspired, leading to the conclusion that the compilers were obliged to use more or less whatever they had to hand.

The notes are succinct, fitting as they do onto three sides of a CD insert, and probably provide sufficient information for most consumers.  But at no extra cost the producers offer free additional information for the asking.  The author has drawn upon a variety of sources, most notably vinyl and CD issues from the Topic stable for biographical material, and Bill Dean-Myatt's research on the Beltona label for recording data.  One glaring typo leapt out: George Morris apparently played 'an eight sided Wheatsheaf concertina' (not mentioned but nevertheless actually depicted on the cover photo).  One wonders what Messers Wheatstone and Co.  would have made of that.

There are the odd quibbles, of course, but these are minor.  It's something of a misdirection, for instance, to refer to Jimmy Shand's instrument on this track as a melodeon.  By this date - 1935 - he had graduated to the chromatic button accordion, which requires an entirely different playing technique.  One might take exception, too, to the author's claim that Shand was 'Scotland's greatest ever button box player.' Most famous, yes, within in his own lifetime (he died about a year ago); most lauded, certainly.  Yet the assessment is subjective and relies on a lack of knowledge of what came before (only partially knowable) and that which was never recorded.

The notes also possess something of a down-home quality about them, 'speaking' directly to the audience.  Of the 'Pamby' Dick track, for instance, we learn that while it 'isn't one of his better ones.  We're always looking out for others.' They also announce that a CD devoted solely to the Wyper brothers is in preparation: 'Let us know if you want a copy.' Yes please; though really the time is long overdue for an extensive reissue sequence of their more than two hundred tracks, first appearing on cylinders under Peter Wyper's own imprint in about 1903.

Unless the Willie Kemp track, which I cannot find under that title in the Beltona discography compiled by Bill Dean-Myatt and myself, is as late as 1950 the date span claimed by the cover is way out; much earlier in fact, and all the better for that.  It should read, not 1910 to 1950, but 1907 to 1935.  Further details of the tracks may be of interest to readers of this journal, and I give them here.  The sequence is : performer(s) with instruments played in brackets; date of recording (sometimes approximate but, other than the Great Scott track, within a few months at worst); the original 78 rpm issue; previous reissues where applicable, all, as it happens, on the Topic label (a pair from one of the Bob Smith vinyl albums, and three from the recent 'Voice of the People' twenty volume CD set).

Already available on the Ythan Music Trust label are two further releases, one by Jim Cameron and His Scottish Country Dance Band - standard fare from 1950s Beltonas, the other by the more musically interesting Willie Kemp and Thomas 'Curly' MacKay.  Both are recommended for the broader cultural context which they illuminate.  In the planning stages are issues of Bob Smith's Ideal Band - exhilarating dance music from urban Glasgow during the 1920s and 30s - and noted violinist James Scott Skinner (plugging the gap left by Topic's failure to reissue their vinyl Smiths and Skinners on CD), plus sets of sketches recorded for Beltona by Joe Corrie, the Fife Miner.

But, of the three releases already to hand, this is the best by far.  Some of the material is rare even among collectors of the original shellac issues, and you are unlikely to hear much of this elsewhere.  Well worth buying.  Give it a try.

POSTSCRIPT, 27 December 2001 - My misgivings regarding track nine, with no corroborating evidence that Willie Kemp played the harmonica, were well founded.  Bill Dean-Myatt tells me the player is actually Donald Davidson.  The entry should read:

POST POSTSCRIPT, 1 January 2002 - I have now heard from Ronnie Cairns, the compiler of this CD, and he tells me that the performer on track nine is Willie Kemp after all.  The 32 bars of Cock o' the North is apparently lifted from Kemp's recording of The Scaffie, then doubled up to make it 48 bars length.  This artifice reflects Kemp's trick of playing the tune (the only one he could play on harmonica) twice through in live performance before being (deliberately) interrupted by a plant in the audience before his limited skill could be discovered.  So, the details now look like this: