Fr Séamus Quinn, a catholic priest from Fermanagh and Rev Gary Hastings, a Presbyterian rector from Belfast first met at the University of Ulster and spent time playing music between studies before going their separate but parallel ways.  But these men regard themselves as musicians first and clerics second. 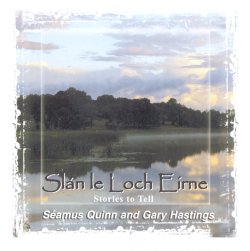 This recording sees them reunited and joined by bouzouki player Ciarán Curran, another contemporary from the university.

Séamus Quinn, a highly regarded fiddle, melodeon and piano player, featured on the Big Dog Little Dog record with Ben Lennon and others released in 1989.  More recently he has featured on some of the Coleman Heritage Centre sponsored recordings of music from Sligo and its environs.  Gary Hastings is less well known from recordings but is nonetheless very highly regarded in flute playing circles.

In their early days both men were heavily influenced by 78rpm recordings of Coleman, Morrison, Paddy Killoran and his Irish orchestra and Dan Sullivan’s Shamrock Band.  This influence is evident, not just in the choice of tunes such as The Shaskeen, The Sligo Maid and The Maids of Castebar but also in the way the music is played.  There is the lift and exuberance which characterised the group recordings of the 1920s and 30s.  Séamus is double tracked to create a fuller sound on three tracks.  The first track powers out with a full ceili band sound on a set of barn dances that come straight out of the 1930s.

In between the 'band' tracks there are genuine duets and a few solos from both players.  The duet playing is very lively and has a ‘live’ feel rather than an arranged production and is so much more enjoyable for it.

Both men are masters of their instrument and Séamus’s use of tight and open triplets and crisp rolls can be heard to great effect in his solo working of the Shaskeen.  He also produces some nice variations on a tune that has had its fair share of personalised settings over the years - from Touhey, Coleman through to Willie Clancy.  Gary Hastings is easily placed as a northern flute player, his punchy breathing, tonguing and rock-hard tone can also be heard in other Belfast players such as Harry Bradley and Marcas Ó’Murchú.  The northern flute style is not deep or moody like Paddy Carty for example, it’s but bright, self-confident and leaves you with a smile on your face.

The sleeve notes are written as two short essays (dare I say sermons?) and make for an interesting experience, written in both English and Gaelic, often using both languages in one sentence, but they reveal the two men’s attitude to music and musicians.  In his notes Gary Hastings says that traditional music is not about music at all but about people, those you associate with the tunes and contribute to the craic between the tunes and give the tunes their shape.  To get the real taste of the music you have to be in among the players.  This stuff doesn’t stick well to shiny CDs or plastic tape.  Recordings are only recordings and the music only becomes meaningful when it’s shared.  Imagine yourself sat in a bar watching these lads playing and holding a sort of musical dialogue with each other and the listeners around and you’ll see what he means.  This need to share is something that comes over strongly and, despite the medium and the recording situation, gives the listener a taste of that intimacy.

Cló Iar Chonnachta are rapidly building a reputation for quality recording to rival the Claddagh catalogue and the recording and production on this CD is excellent.  One small gripe - the photo of the lads on the back of the sleeve notes has been reversed turning both players into left-handers.

The CD is recommended if you like straight old style traditional playing full of character; if you heard this coming out of a bar you’d definitely not pass by.