The Wrigley twins' fifth CD appears on their own label.  Nothing unusual there, but more novel is that it's also being used to promote a range of jewellery of the same name, with 'individual pieces...named after tunes and sets in the album.'  Sheila Fleet, the jeweller in question, is but one of seven sponsors, from Orkney Enterprise to Orkney Cheese, whose logos appear on the poster enclosed with the press release. 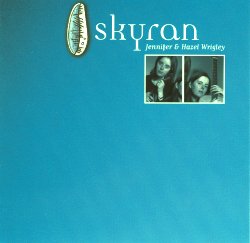 It's a commercial world, no doubt about it, and having run a couple of small labels myself, I know the hard way that capital and marketing are the first things you need, and naive enthusiasm just about the last.  I hope the CD and the label, and indeed the jewellery collection, do well, although I think I'll let interested parties find the latter's website for themselves.  Perhaps some of Geosound's profits could be spent on teaching its publicist that the plural of trowie is not 'trowie's'.

Skyran is loosely a concept album, based around the Picts, who 'were thought to be little painted people who disappeared without trace,' and who became conflated in Orkney with the trowies, aka trows in Shetland, and trolls outwith the Northern Isles.  Trowies are addicted to fiddle music and dancing, and in the folktales they lure unwary fiddlers into their howes, where, as usual, many years pass in a night.  However, this knowledge isn't necessary for enjoyment of the album, which, encouragingly, was recorded with the assistance of a handful of local musicians (Billy Peace, accordion and piano, Ian Mackay, double bass, and Erica Jolly, fiddle) rather than featuring imported famous names.

Jennifer Wrigley wrote the bulk of the tunes,

and is a fertile composer, with strong melodic ideas, and technique to match; for the ideas, here's a clip from The Deerness Mermaid, (sound clip, left) and for both ideas and technique, here she is double stopping through The Dingeshowe Dancers, (sound clip, right) which is also a showcase for Hazel's splendid piano playing.  The latter tune is perhaps as close as the CD gets to the sort of high energy, folk-based music that tries to compete in the rock market, and even then it's not very close at all - hurrah!  It may be, though, that a wish to give the music a spot of voom accounts for the guitar (also played by Hazel) and bass being placed too close to their microphones.  That's not just my old fogeyish taste speaking, either; they sometimes boom obtrusively, as can be heard on the Deerness Mermaid clip.  The final track degenerates from fine slow air into aimless, whale-hugging, new age glissandi in its closing minute or so, and South Ron' Run ends in a harmonically dubious scrabble.  There's only one tune with a musicians' in-joke for its title, however, which I suppose is as good as it gets these days.

These grumblings are far outweighed by the CD's positive qualities, though, and while it only needs what the editor calls a type 1 review ('It was good/average/poor of its type…I do/don't recommend it').  Enthusiasts for Orcadian and Scottish fiddle music can take it from me that 'good' and 'do' are definitely the applicable choices.