The Strathspey King
Original recordings of the Scottish fiddle maestro, 1905-1922

This is not the music of a young man.  Skinner was already sixty-two years old when his recording career began in 1905, a working musician since the late 1850s.  His embrace of new technology was bold, and characteristic.  Twelve years previously, in his late forties, returning from an 1893 tour of America, he gave up his bread-and-butter work as a dancing master and fiddle teacher, re-inventing himself, on the basis of a publicity poster he saw, as the ‘Strathspey King.’ 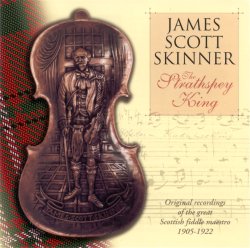 It was now "as a solo violinist", declared Skinner, that he meant to stand or fall.  He also resolved to wear the kilt as his stage costume.  His self-belief was huge, but so was his talent.  A dance musician from boyhood, he wrote great tunes and was a compelling performer.

Born in Banchory, near Aberdeen, in 1847, by the age of eight Skinner was playing cello with Deeside fiddler and opium addict Peter Milne, at rural dances.  At twelve he joined a youth orchestra, Dr Mark’s Little Men, who toured Scotland, England, Ireland and Wales.  There, with the help of Hallé orchestra violinist Charles Rougier, he extended and refined both his left-hand technique and his bowing, before leaving to study under William Scott, dancing master.  After a brief interlude as a blackface minstrel, Mr Grace Egerton, it was as James Scott Skinner, winner of the 1863 Inverness violin competition, that he started his career.

Besides teaching and composing, he developed a concert-style presentation of Scottish fiddle music that worked brilliantly in the Victorian theatre or hall, with a seated audience.  He was also PR minded.  As early as the 1860s he’d adopted ‘Scott’ as his middle name, supposedly after his dancing master, but surely also evoking the spirit of Sir Walter Scott, to whose romantic nationalist view of Highlands culture he willingly subscribed; indeed it probably formed the basis of his later, iconic stage persona.  Some of the trappings, even the kilt, may have been historically spurious, invention-of-tradition stuff, but they certainly sustained Skinner, who won ever-widening public recognition in the late Victorian period.

At the turn of the new century he married his second wife, Gertrude Park, who helped raise his two children, and the earliest of these January 1905 recordings is a confident medley of concert hits, The Laird o’ Drumblair, The Baker Reel and Will Ye No Come Back Again?  Forget folk collectors and field recordings.  What we’re hearing is an established professional fiddler, buoyed up by recent conquests, both professional and romantic.  Skinner, around this time, while committed to his music, was nothing if not adventurous in his personal life.  On an English tour in the Midlands the previous year, it seems, he may have had a love affair with Lily Maud Hodgkinson of Stoke-on-Trent, who bore a child in November 1904.  In the studio two months later, accompanied as usual by a pianist, Skinner stylishly delivers one of his own strathspey and reel sets, concluding with a shrewd nod to nostalgic Jacobite sentiment.

How many copies did the record sell?  I don’t know, but Skinner returned to the studio in 1910, the year after his second wife left him, to record, among other sets, Maggie Cameron /Athole Brose /The Devil In The Kitchen /Forbes Morrison, his playing as crisp and accurate as ever.  These sessions too, as well as the later, 1922, recordings, are featured on this 21-track CD from Temple Records.  All have been processed to reduce surface noise and clicks, so the overall sound-quality is quite decent.  The primitive cylinder equipment and Stroh fiddle of the earlier sessions were presumably replaced by more sophisticated devices by 1922, but the sound differences are not glaringly apparent.  At the risk of being an anorak, I’d have welcomed more technical data in the sleeve notes, particularly the recording dates which, for all but three tracks, are just not given.  For example, was the truly atrocious intonation of the German Schottische caused by speed fluctuations in early recording gear, or was Skinner, at some later date, starting to lose it?  The CD is a welcome format up-date of the (pair of?) Topic LPs compiled in the 1970s from the original 78 rpm discs.  Bruce MacGregor’s new essay on Skinner is well written and informative.  Alastair J Hardie’s original notes for Topic, however, need revision, since one at least of the LPs included Bill Hardie playing Skinner, as well as Skinner himself.  The track details, still alluding to both, could be more carefully edited for the new format, as well as supplemented.

Scott Skinner’s entire recordings represent but a fraction of his huge output as a pen-and-ink composer of roughly six hundred tunes.  He published first Twelve, then Thirty New Strathspeys and Reels in 1865 and 1868, while working as a dancing master and fiddle teacher to the Queen’s tenantry at Balmoral and ‘all the big private families’ of the northeast.  The Miller o’ Hirn Collection (1881), The Beauties of the Ballroom (1882) and The Elgin Collection (1884) followed his marriage to fellow-dancer Jane Stuart.  Despite his upbeat account of this period in his later memoirs, Skinner may in fact, as Bruce MacGregor suggests, have been forced into bankruptcy.  At any rate when Jane suffered a mental breakdown and was admitted to Elgin Lunatic Asylum in 1885, the diagnosis was ‘excitement’ caused by ‘pecuniary embarrassment.’  Jane died there a pauper in 1889, but Skinner went on with ruthless determination to produce The Logie Collection (1888), The Scottish Violinist (1900) and The Harp & Claymore Collection (1904), an astonishing weight of achievement, before he even began his audio recordings.

Retirement, for Skinner, was never a serious option.  He appeared at the London Palladium with Harry Lauder in 1911 and it was only after the Great War, as an old man of seventy-nine, that he made his final discs in 1922 - including the track Goodbye Gramin /Johnnie Steele /James Hardie on the current CD.  He would die five years later in Aberdeen, not far from his birthplace in Banchory (famous locally today for its good chipshop), but his late flowering continued to the end.  1923 saw publication of his memoir, My Life and Adventures and two years later he performed at the Albert Hall.  Only after a final, disappointing, trip to America, did he at last give up the ghost in March 1927, his funeral being witnessed, according to the Aberdeen Journal, by ‘thousands of people, mostly womenfolk.’

On the evidence of this CD, how good was Skinner’s playing?  Track 17, the 1910 Maggie Cameron set referred to above, is one of several that are masterful and inspiring.  His versions of Home Sweet Home and Cradle Song, on the other hand, will sound just plain kitsch to most listeners today, except possibly after a good few malts.  Though similar in character, Our Highland Queen, which opens track 2, works better as a period-piece, redeemed by Skinner’s historic link with Balmoral and recalling the Queen’s earlier friendship with John Brown.  The trick fiddling piece The Parrot would probably work better live in a hotel bar at four in the morning, but The President, despite being equally flashy, is still an impressive show-stopper.  Skinner performs his great strathspeys The Iron Man, The Miller o’ Hirn, The Laird o’ Drumblair etc with enormous drive, though some of the meticulously annotated bowings found in published versions seem to have gone out of the window.  He also plays at a generally faster tempo than is the norm among present-day players in the north-east.  The Laird o’ Thrums set, dedicated to four of his patrons, sounds at times like a rush job, but how much this reflected his standard practice, or whether he felt squeezed by the time constraints of the 78rpm format, is hard to judge.  His louds and softs can be quite dramatic and sudden.  Again, whether the rather screechy tone of his reel The Bungalow was caused by volume distortion in the recording process, or by heavy-handed playing, is hard to say.  Skinner, at any rate, seems to have been more fortunate - or just more careful - in his use of piano accompanists than, say, Michael Coleman around the same time.  The various (unidentified) pianists make a good fist of it, negotiating even the maestro’s most impetuous moments, in the classic MacPherson’s Rant set, for example, with championship-level skill.  The Freebooter, as this celebrated tune is also known, is given in two versions here, both undated, of which I prefer the more impassioned, if less careful, track 19.

Even if Skinner’s recordings alone can scarcely represent the full weight of his enormous contribution, this CD is a must-have collection for anyone seriously into Scottish fiddle music.  His musical heirs, from Hector MacAndrew to Tommy Peoples, have interpreted his work, it could be argued, even more profoundly than the maestro himself.  (I’m thinking of the superb version of Hector The Hero, which Skinner himself never recorded, on Peoples’ recent Quiet Glen CD.)  Other of his later devotees may have over-emphasised the classical, sedate qualities in his playing at the expense of his passion.  "As fiddlers", I’ve heard it said in Edinburgh, "we have liberated ourselves from the dance, and a jolly good thing too".  Skinner, in his own time and for his own purposes, did, it’s true, tame some of the rawness out of Scottish rural fiddling, but the fiery, irascible, spunky spirit of the old dance fiddler is, in Skinner’s playing, never far away.