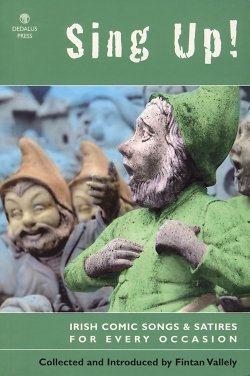 What is a tradition?  A custom, opinion or belief handed down orally or by practice (OED).  In English music we have three of them: 'proper' traditional performers (who are now all dead); what I have termed 'sucessors'; and revivalists.  Each are different, and relatively separate ... certainly the first and third are.  In Ireland (and Scotland) it's a bit different - since many proper traditional performers are stil alive, there has not been this break in the oral tradition, so plenty of younger performers can be rightly called traditional by any reasonable definition.

One of the things a few traditional singers have always done is to write their own songs - which will go on to become traditional if taken up by their community ... a comparitively rare occurrence.  This is something which happens a lot in Ireland and, unsurprisingly, a good number of the songs are satires and comic ones.  All of which allows me to review this wonderful book in these pages without crossing any lines in the sand drawn by elitist old curmudgeons - like me!

It is, I think, impossible that you won't have heard at least some of these songs before - all the greats are here: Drumsnot, Beauty Spot; several Bodrhßn Songs; Binder Twine; Charles the Navigator; Joe Frawley; Hamlet; Invitation to a Funeral; Nell Flaherty's Drake; Moving Statues; Pool Song; Transit Van; Waterford Boys, Willie Mac Bride, the Revenge - they're all here.  Plus about 60 others, many of which are well up to the standard of the aforementioned.  As with sound clips, it would be pointless to quote you the odd line or verse - you really need to get the whole thing to properly appreciate the flavour.

But I feel that the book's greatest asset, and the reader's greatest joy, will be found in the introductions and commentaries by Fintan Vallely.  Almost all of these are very funny, and the best of them are witty, wise, incisive and absolutely hilarious.  Yer man can run on for a whole page or more of inspired satirical rant about almost anything!  Here's a bit from the introduction to The Resurection Romp:

Living so far from the 'Holy Land' as we do here in Ireland, we tend to make a national compensation for that fact by being extremely dedicated to the active pursuit of Christianity.  This is done often in a manner which suggests that either it is the only religion in the world, or it is the best religion in the world. Television refutes any questions about the first possibility; crusades and warmongering illustrate that there is at least a major flaw in the second.  In any case, even the otherwise foolish, ignorant, anti-intellectual and travel-phobic in our most backward urban and rural midst can work up a lump in the throat over events which began in Palestine a couple of thousand years ago.  One of the stories from those momentous biblical times which is particularly delighted in in Ireland - being paid tribute to indeed by the exercise of forty days and nights of going off sweets by children (and cigarettes and drink when you're big) - is how Jesus predicted his own death, how he was betrayed, was given a hard time, rejected by Myles na Gopaleen's 'plain people', hung on a cross beside General Lennie Murphy and Gerry Adams, and let die.

The death bit was public, but the resurrection was behind closed doors, so to speak, and consequently we are all expected to take his word for it and believe in it even though we never met him (this is 'the faith').  There is a certain scope for doubt; for instance Thomas questioned it all - and he KNEW Jesus.  The truth of the matter is that it was a publicity stunt that went wrong - like having a Falklands, Gulf or Iraq war without CNN.  Jesus did want coverage; Peter mucked it up, and his boss was so pissed off that he only made a couple of token appearances to the Lads afterwards and eventually went back to heaven.

Stuff like this precedes almost every song - making this the perfect Toilet Book for anyone who enjoys a good laugh and is interested in music, politics, religion, Ireland or pretty well anything else, really.  Buy it!  From www.dedaluspress.com at Ć20, or any good bookshop.