Sing Us One of the Old Songs (book)

Since Musical Traditions Records, among others, have begun producing CDs containing the whole of a singer's repertoire rather than just a 'commercial' selection, it has become apparent that our standard reference works are no longer quite up to the task of giving us much information on the Parlour, Music Hall, Popular ... call them what you will - songs which Cecil Sharp and most of his successors have simply not bothered to collect.  Malcolm Taylor, librarian of the VWML, suggested that this present volume might fill the gap to an extent - thus prompting this review.

Subtitled A Guide to Popular Song - 1860-1920, the book sets out to list such songs, their performers, publishers, composers, dates, and the shows from which some of them originated.  A section also gives the repertoires of some 1,700 performers, totalling around 18,000 titles.  In the one-page preface, Michael Kilgarriff states his criteria for inclusion as 'popularity, topicality, and significance in the career of its singer.  Also targeted for inclusion are titles still remembered and performed ...'  The wider implications of words like 'popularity' (with whom? when?), 'still remembered', etc. are not expanded upon.  Thus it is difficult to determine the extent to which Kilgarriff has succeeded in his task, nor to judge whether any inclusions are dubious, or omissions serious.

At first sight, the book appears to contain a staggering amount of information - 848 pages of 9-point type - but closer inspection reveals that for many inclusions only the title of the song is given.  Even when a song turns up in every possible category, the most we learn about it is: Title, name of composer and lyricist, date of composition, name of performer(s), the show it appeared in ... That's right - just five pieces of informatiion about some songs, and a good deal less about many of them.  So this reviewer, at least, is prompted to wonder how appropriate the book's title and subtitle can be considered to be.  No-one would be any nearer singing an old song - even if they read it from cover to cover.  In what way is the reader 'guided', I wonder?

In reality this is just a book of lists - no, that's too kind, it's just one list, displayed in up to five different ways.  From these lists it's sometimes possible to glean the above mentioned minimal information on some of the included songs.  I say 'sometimes' because, unless you happen to know the correct official title of a song, you're not helped with any additional interrogational aids such as first line of chorus, alternative title, etc. (the latter do appear very occasionally, but are not included in the Index, so you can't look them up). 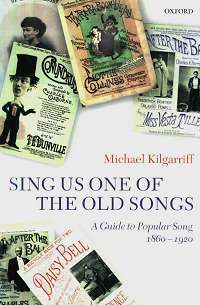 A perfect example can be found in the well-known Daisy, Daisy which, unsurprisingly, appears in all of the book's main listings - but not under that title.  Its true name is Daisy Bell, but no alternative title is given, even though a photo of the original sheet music features on the cover of the book with the subtitle A Bicycle Made for Two clearly visible (see picture).  Neither this, nor 'Bicycle Made for Two, A' can be found anywhere in the book.  My wife and I spent a desultory half hour last evening attempting to look up some of the Music Hall songs we know - we failed to find well over half of them.

Time to put the book to a real-life practical test - MT's forthcoming Daisy Chapman CD contains several songs which might be expected to fulfill the criteria 'popular : topical : significant : remembered' - so let's see how it does ...

Daisy sings nine songs which I know or suspect to have had a named composer:


The Banks of Allan Water appears twice in the 'repertoires list' where it's shown as being sung by Janet Monarch Patey (aka Mme Patey-Whyttock) and Dame Nellie Melba.  It's not in the 'core songs' list of 'songs and ballads most likely to be found in today's Old Time shows' - nor is its composer given.  Granny's Old Armchair also appears just the once, without any composition credits, in the repertoire of Frank Crumit.   None of the others are to be found at all - or not with those or similar titles.  Of the known composers, only George W Persley is listed - and with only two songs to his credit ... Your Faithful Sailor Boy is not one of them.

Whether this is a fair test of the book's comprehensiveness I can't really say.  Clearly it was not aimed at a readership with interests such as mine.  Picking a random page (p.768) in the Index, I was able to recognise only one title - On the Good Ship Lollypop - of the approximately 80 entries.  Where I can find a song, it is usually missing some or most of the five (four, if it wasn't in a show) pieces of pertinent data.  On another randomly selected page I found only 24 of the 80 entries to have anything more than the title of the song, and of these, only five with sufficient page references to suggest that the full data are present.  In fact, closer inspection suggests that only the 1,250 songs in the 'core list' are fully detailed - which is not really very many in a large 848-page book costing ú35!

I'm no advocate of digital publishing per se, but I know that Michael Kilgarriff's database file, from which this book will have been constructed using a conventional 'database publisher', could have been sold - probably on a floppy disc - for under a fiver.  What's more, the user could have interrogated it a damned sight more easily than s/he can in the book format.  A good 'real' book is a joy for ever - but I have my doubts whether this present, hefty volume can be considered as a real book at all!