Two very different records from different countries that somehow appeal to me in very similar ways.  Tommy McCarthy's recent release (also on Maree) was reviewed in these pages, but I hardly had the chance to listen to a couple of tracks before it was whisked off by the reviewer - so I can't say with any accuracy how much Jacqueline's playing owes to her father. 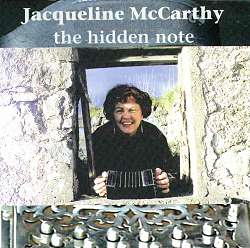 Quite a lot, I would guess, from what I remember of him from 30 years ago, and from the way in which family influence tends to be pervasive, even if the younger members try to go their own way in the world.

Jacqueline's notes make it very clear that she was fascinated by the music, and by Tommy's playing, from an early age, and has been playing in the family band since the late '60s.  In fact, I remember them as very young children from the King's Head, Islington, days - around 1970 - and the same band can be heard in its present form on three tracks of this CD.

The playing is just what I think it ought to be - relaxed, simple, direct ... and no flash!  As I've said many times before, it's a real pleasure to hear to hear diatonic push-pull music again after so many years of the B/C chromatic accordion dominance,

and the (comparative) flush of concertina records released recently is greatly welcome - to me at least. (sound clip - Hardiman the Fiddler)

But it isn't that alone which makes me warm to this record so much.  Whether Jacqueline's upbringing in England has anything to do with it I don't know, but her playing sounds so much more familiar to me than the majority of Irish music does.  I listen to her and I think "if I learned this tune, I could play along with her in a session".  Even the McNamara Family's fabulous 'Leitrim's Hidden Treasure', or the lovely 'Ben Lennon and Friends' record, which contains a good number of tunes I've known and played for almost 30 years, don't elicit this response. 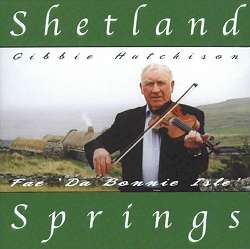 The Gibbie Hutchison CD was not intended for review, but was a present from MT reviewer Chris Smith, who is also a Shetland resident.  However, it's so nice that I feel I should share my pleasure with readers.

Chris said "It's Gibbie's debut CD, at the age of 80 and after 71 years as a fiddler, and is ... the real old-fashioned Shetland fiddling, without watered down Scottish/Irish additions.  I have no connection with the record company, which is Gibbie's son, who also plays guitar, bass and second fiddle on the CD.  I just think this is a cracking good record."  It is indeed, and appeals to me for many of the same reasons as the McCarthy disc, above - it's simple, clear, rhythmic ... ordinary peoples' music.  What greater praise?

The booklet has some nice touches too - both Gibbie and his son John have spent their lives as fishermen, so there are a series of photos of the traditional fishing craft of the islands, plus more of the fiddlers who passed on their tradition to them.  As is the case in many areas, some of the 41 tunes on the CD have words associated with them - little snatches of song or rhyme which are used today mainly as aides de memoire - and it's good to see them included in the booklet.  One reservation after all the praise - background graphics often detract rather than enhance, and at least one page here is rendered pretty-well illegible by an overdone example.

The 'Springs' of the title is the local name - in Shetland generally and Whalsay (da Bonnie Isle) in particular - for the old style tunes, usually reels, which were used specifically for dancing the Shetland reels.  Again, this finds favour here - functional dance music has a certain rightness about it that's often missing from music developed for listening to.  Can it be the 'art as object' vs 'art as process' argument again?  Quite likely - but I won't impose it on you again, just yet!  But an interesting point is that, while functional dance music often makes less-than-satisfactory CDs, this present one is a real pleasure.

I'm wondering if the relatively uncluttered music (usually just solo fiddle and guitar backup) is easier on the ear - or less distracting? - than a larger band's music.  See what you think - here's Bonny Lass a' Bekkahill.

Jacqueline McCarthy's record is available through Copperplate in the UK, and the contact details of both record companies are in our Useful Addresses page.