It's always nice to find that someone else shares your views on a subject, so I was very pleased to come across this quote from Norma Waterson:

This is not, necessarily, to imply that it's an inferior thing - but it certainly is an entirely different thing.  People suggest to me that only in England can this point of view be realistically held (many believe that it's unrealistic even here).  But, personally, I doubt that anyone who's actually listened to much traditional music (in the widest sense) can fail to hear the difference between present day English, Irish, Scottish, French, Italian, American, and much African music, and that recorded 'in the field' there before about 1960.  Because this 'modern' music is widely reviewed in dozens of magazines and websites across the world (and because the older music, generally, isn't) I try to keep the former out of the pages of MT - preferring to reserve them for the older stuff.  Because it's "an entirely different thing" it is treated differently here, and recordings of it are reviewed using different criteria.

Anahata asked me to review this CD knowing that I would apply similar criteria to those I'd use for a traditional record, so I hope he won't be surprised by what I have to say about it. 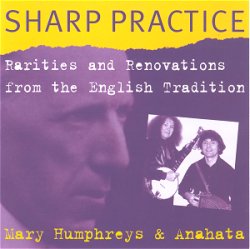 Firstly though, it's only fair to state that it is a very good revival style record, and that if you found singing and, particularly, music of this quality at your local folk club or festival, you would undoubtedly be very pleased.

I've found myself in numerous sessions with Anahata over the years and have always been impressed by his playing; he has all the technical skill you could possibly want, yet seldom employs it gratuitously.  This level of sensitivity is clearly evident on this CD; only on one track - the three hornpipes Marsden / London / Stoney Steps - does he fully display his dazzling technique.  Elsewhere, he plays the music - and not the instrument!  Full marks on that score.  But the revivalist nature of the record seems to demand that there should be music everywhere; accordingly we only once hear Mary singing without accompaniment - however minimalist - and many of her songs have a tune added to the beginning or the end of them.  Why?  If a song's not good enough to stand on its own, why learn it - or why decide to put it on a CD?

Many people sing in several voices; they sound quite different when singing different kinds of songs.  One of my favourite traditional singers, Cyril Poacher, can sound almost like a different person when he's doing a music hall piece like Running up and Down our Stairs compared with his typically Blaxhall declamatory style on, say, Bold General Woolfe, or his almost passionate delivery of Nancy of Yarmouth.  That's as it should be.  Mary seems to have two voices; a straightforward 'singing the song' voice she uses to very good effect on the 'bigger' songs here - Barb'ry Ellen, Sheath and Knife, Spotted Cow and the two rare songs on the CD, No My Love, Not I and Pride of the Season.  Elsewhere, an absolutely stereotypical 'folk club' voice emerges, for no good reason that I can see; none of the songs appear to require this treatment.

The CD's title might be considered ironic, seeing that there are only four songs here from Sharp's collections, but one of them is well worth your attention.  When Fishes Fly (No My Love, Not I - Roud 1403) is a lovely thing from Lucy White's repertoire.  Mary's song has a text collated from this and versions from Emma Overd in Somerset and Everett Bennett in Newfoundland, and it's a delight.  The generally good booklet notes comment that this is an 'extremely rarely-collected song' - yet Roud's Index has 37 instances of it, albeit only representing 15 singers.  The importance of having a copy of the Indexes to hand when writing booklet notes is borne out again when we come to the other rare song on the record, Pride of the Season, a Newfie version of The Bonny Green Tree (Roud 2512).  The notes cite versions from Maggie McPhee, Sheila Stewart and James Carmichael, but say that any other versions have eluded their searches.  As the risk of seeming pedantic, Mary might like to know that Roud's 17 examples also include the following:

Whatever, Pride of the Season is a beautiful thing, very well sung (happily unencumbered by accompaniment), and it's a great pleasure to find it here.

If all Mary's singing were in this style, and unaccompanied, and the songs were all presented as discrete items which did not need the prop of an additional instrumental piece, I would feel that this CD stood up extremely well against many records of traditional singing and music, and I'd be raving about it.  As it stands, it's a good revival style record - where the overall sound of the thing seems more important than its content.  Personally, I think this is a shame.  Many other people will, of course, disagree, and it will probably be far more successful in its present form that it would be the way I'd like it.  I think that, too, is a shame.