A Selection for Performers from 'The Greig-Duncan Folk Song Collection'. (Paperback) edited by Katherine Campbell 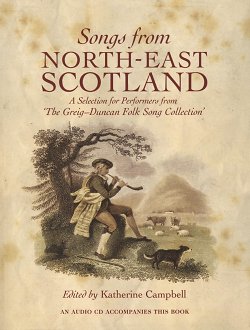 This book is a useful selection of 150 songs from 28 of the 500-plus informants who altogether contributed some 2000 songs to the Greig-Duncan Folk Song Collection, amassed in the decade before the Great War of 1914-18, and published in eight volumes between 1981 and 2000.  As it says on the tin, the selection has been made for performers, and functions as stand-alone book for such folk.  The sources are divided fairly evenly between male and female, and Greig and Duncan's informants; they are selected equally from each collector's territories, as displayed on a map.  The songs are allocated per singer, and are given the singer's titles as well as the Greig-Duncan numbers.  Only one variant of each song is given.  Biographies are added, with comments from any descendants found.

The tunes are displayed in staff notation, with Dr Campbell's explanations of her arrangements, and suggestions for performance appended.  To hear midi files of all the songs, the singer is referred to the University of Edinburgh's School of Literatures, Languages & Cultures' Celtic and Scottish Studies' website: www.celtscot.ed.ac.uk/greig-duncan.htm

I am credited with having assisted in the production of this book, but this was not the case, for I would have advised strongly against the form and presentation of the accompanying CD, which contains 14 tracks, all sung by Dr Campbell herself.  On all but one she accompanies herself on a (electronic) piano, with occasional fiddle accompaniment by James Alexander.  This presents a number of problems, the first being that because they are sung within her range

(and even so she struggles at times to reach notes), all the songs sound pretty much the same.  The sweet voice and singing style that beautifully carries The Banks of Clyde (sound clip left) is unsuited to the robust Whale Fishing Song. (sound clip right)

The mystery remains: she states that she has selected mainly songs from the North-East of Scotland, yet has not got North-East traditional singers to perform them and provide both variety and authenticity.  Perhaps their opinions may be of use; when I asked around, they inclined to such comments as:

ōI don't know what the criteria were for the selection of the songs, but if it was to show the variety of G-D, they fail since there is very much a sameness of melodic construction for each song.  The piano is drawing room and the fiddle merely echoes this.  The result is that we are looking at a revival of the tradition of Lady Anne Lindsay or Lady Nairne, i.e. national song with no risks taken, no earthiness; the piano (synthesiser?) sounds just like an 18th century harpsichord.  Moreover it is not good accompaniment, but rather dictatorial in the creation of a straightjacket in which the singer must remain.ö

The commonest concern was that this throwback to 'parlour-room presentation' would actually put singers off exploring the full Greig-Duncan Collection, especially its many variants of individual songs.  But the book itself is a different matter, and most agreed with one North-East singer:

ōThis is a book worth having to increase a singer's repertoire.  Buy it - but throw away the CDö.