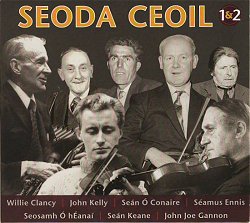 Released as part of Gael Linn's 60th anniversary celebrations, this double CD comprises a set of recordings of genuine Irish traditional music dating from the late 1960s.  Originally published on LP and tape by Gael Linn, in association with Comhaltas Ceoltoiri Eireann, they have been unavailable for a great many years.

The two CDs give us a glimpse of the pure style of traditional music as played by the masters in 1968-9.  County, local, and individual styles and tunes are given pride of place.  Unavailable for many years, the recordings have been digitally remastered and are now presented in CD format for the first time.  The two volumes were part of a larger project which envisaged a total of eight volumes but only these two were ever produced.

And here was me, hoping to be able to say something nice - for a change - about yet another Gael Linn historical re-release.  Check out the personnel and the tracklists and you'd think you were in for a real treat,  Wrong!

My first thought was that something had gone seriously wrong with my new speakers, my expensive CD player, or my poor old ears!  Honestly, I had to listen to a different sound source, and play another CD, before I could truly believe that these 21st century CDs had been released in this state.  The sound throughout is truly appalling!  And I'm sorry to say that quite a lot of the music is not that much better.

CD no.1 starts with four tracks from Willie Clancy, and ends with another, and I have to say that I've heard him in much better form elsewhere.  His Bold Trainer O and Garraí na Saíleog are pretty good, but the other tracks don't really pass muster.  And Seán Ó Conaire isn't a fabulous singer.  John Kelly is far more to my liking, both on concertina and fiddle.

CD no.2 is mastered at a much higher level than the first one, so the sound is even worse!  This is a shame, as this is where many of the better performances are to be found.  Seosamh Ó hÉanai (AKA Joe Heaney) is superb, and because his voice doesn't contain too many high frequencies, sounds fairly good here.  John Joe Gannon's accordion has that ultra-musette voicing that I suppose people thought was really neat back in the '60s ... but tastes have changed.  The instrument sounds dreadful with this horrible sound, although his playing is fine.  Séamus Ennis plays in his usual brilliantly quirky way, but the beautiful sound of his flat set is all but inaudible.  Seán Keane seems to be on fine form - such a shame it's so unpleasant to listen to.

And to put the final nail in the coffin, we get 83 minutes of music on a pair of CDs ... that means that 77 potential minutes are blank.  Any other publisher would have left out the weakest track and released the rest on a single disc.  Once again, Gael Linn, this really isn't good enough!