In this delightful album three skilled exponents of Irish traditional music and song deliver a subtle weave of finely-crafted performances.  Each has decades of experience, fully time-served in the business of Irish music, performed for the sheer pleasure of it. 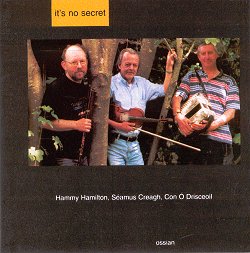 These are musicians whose abilities have matured over years of practice to the level where 'wrong' notes are impossible to strike.  Though not formally joined together in holy bandship they have played in and out of each other's company since the seventies, and each is an established solo artist.

There is an equal level of artistry in the way they have balanced their individual and joint contributions with an almost geometric precision.  Within the bookends of the first and last tune-sets each of the artists performs a solo instrumental, sings two songs, and joins a tune-set with each of the other two individuals (actually Seamus and Con get two sets, but who's complaining).  Within this arrangement the songs are nicely alternated with the tunes.  The end result is a performance programme which is rounded, smooth and full of flavours, balanced to perfection.  (It is also appropriate to mention the enhancement provided by the skilled guitar contributions of Pat 'Herring' Ahern on several tracks).

The musical sets deliver the classic rhythms of Irish dance music - double jigs, a polka set, slides and unusually a barn-dance as well as the usual reels and hornpipes, ordered with optimum effect for light and shade within the overall programme.  The solos are to the highest standard, but I was still more impressed by the intuitive precision in the duets, where the phrasing and decorations are replicated.  These guys fly in tighter formation than the Red Arrows.

This balance of light and shade continues - the voices are all superb in their own right, and yet each voice has different qualities and characteristics.  Likewise in choice of songs the three provide contrasting strands of the Irish singing style.  Hammy sings two fine traditional songs, The Sea Apprentice and Erin's Green Shore with all the classic techniques of intonation, phrasing and decoration.  Seamus has selected two superb examples of the 'In praise of..' category, the first in seriously lyrical admiration of Drishane, in County Cork, and the second, with tongue firmly in cheek, so to speak, exalting Mullingar in County Westmeath.  Con O'Drisceoil, a noted composer of humorous song in the traditional style (several recorded by the likes of Jimmy Crowley and Sean Cannon), contributes two wickedly black renderings, one on the fate of an anonymous spoons player, and the other a dry synopsis of the King Lear story.

While the songs compliment the tunes, the voices themselves provide an extra dimension to the balance.  Each voice is appropriate to the characteristics of their selection.  Hammy's light baritone is exactly right for the traditional style of delivery required by his selection.  Seamus has a deeper baritone with a rich, ripe timbre, somewhat of the Dublin style, carrying a fine subtlety of light and shade, exactly suited to the highlighting of the amazing internal rhymes and poetic hyperbole of the lyrics.  Con's voice is lighter in pitch, shaped by the accent of the South West, and the ideally vehicle for his devilish thrust of his lyrical rapier, immaculately timed.  Some humorous songs, like jokes, are funny only the first time.  Not Con's, however.  They are cleverly and wittily constructed, and can be enjoyed repeatedly, for words and delivery, with the occasional bit of blue only adding to the piquancy, never gratuitous (my 12-year-old son loves Con's songs, especially the piquant bits).

This album is a multi-dimensional education.  The care with which the items have been selected, combined and performed is remarkable and the end effect is a joy to hear.  If you want a CD to entertain and at the same time reflect the core values and capabilities of the Irish musical tradition you can't go wrong with this one.  The key quality is that this album can be listened to repeatedly with undiminished pleasure, with new subtle discoveries each time.  It doesn't seem to pall.  I listen to it end to end because each item seems to flow effortlessly from its predecessor, until the final rake of reels.  Available from Copperplate - see our Useful Addresses page for contact details.