Songs of a Donegal Woman

To aficionados, the Gaelic song tradition of Ireland, the so called sean nós, represents a rare gem of musical culture.  Yet, to English speakers on both sides of the Celtic divide, the idiom remains shrouded in incomprehension.  This pair of releases from the archives of Radio Teilifís Éireann, should do much to dispel the fog.

Amhráin ar an Sean Nós - Songs in the Old Style - embraces all the Gaeltachtana (Irish speaking districts), with the sole and surprising omission of the Aran Isles, and shows the extent of the tradition as it existed a couple of generations ago.  How geographically representative a sample has been assembled, I cannot say, but Connemara was then as now pre-eminent in the field of sean nós.  This pre-emininence can be gauged by the fact that ten of the twenty four performers were born there.  Of the others, five are from Donegal, three from Cork and two each from Mayo, Kerry, and Waterford.

All the great names of that era are on this disc.  They include Seán de Hora, Darach Ó Cathain, Nioclás Tóibín and the famous Seán Mac Donncha, who was heard on that pair of classic Topic LPs, Grand Airs of Connemara.  His even more famous cousin Seosamh Ó'héanai, Joe Heaney to English audiences, has two offerings; Cúnla - a macaronic duet with Séamus Ennis - and an unusual anti proselytisation song, Amhrán Shéamuis Uí Chonchúir.  But it is the presence of so many less well known, or well remembered, artistes that makes one realise what an incredible crock of riches was the world of Gaelic song.  Ennis's rather boring contribution apart, there isn't a single uninteresting track.  True, one or two singers sound past their best, but I think we are still the richer for their inclusion.

Such a variety of vocal styles is heard that the myth of the sean nós as a single entity becomes untenable.  Even the notion that it is bounded by regional stylistic parameters would, on this evidence, be hard to sustain.  A whole range of vocal tones can be heard to supplement the nasal 'nyahh', allegedly so characteristic of the idiom.  Ditto for melodic ornamentation - it is much in evidence, but the degree of usage varies enormously from singer to singer.  One can hear though, an emotional unity.  Just as the cante jondo, or deep song, of Southern Spain is vested with the duende or spirit, the 'deep songs' of Gaelic Ireland are vested with the sean nós.  The Donegal singers are a revelation! Thin, hard tones with an aching beauty and a dignified passion that would make you weep.  I can think of no better reason for exploring this treasure trove than Áine Úi Laoi's staggering An Mhaighdean Mhara (The Mermaid).

It is these lesser known singers who make me wish the accompanying booklet could have given us more biographical detail than just name, location and recording date.  Indeed, in noting it's paucity of detail I was reminded of The Penguin Book of English Folksongs.  One could expect modern compilers to be more forthcoming about their sources than the Victorian collectors from whom that latter publication was compiled.  For instance, among the nearly anonymous voices, is a Connemara fisherman, one Seán Jeaic Mac Donncha.  He was perhaps not widely celebrated, but Seamus Ennis called him "the most perfect singer I have met in Ireland".  It is probably Ennis's recording of Mac Donncha singing Úna Bhan which is used here, and which A.L. Lloyd included among a galaxy of stars in that seminal radio programme, The Folk Music Virtuoso.  A virtuoso and no mistake.  Also, remembering that this production is aimed at non-Gaelic speakers, it is a pity that the booklet gives synopses of the songs in English, rather than full textual translations.  The former do absolutely nothing to demonstrate the poetic riches of Gaelic tradition. 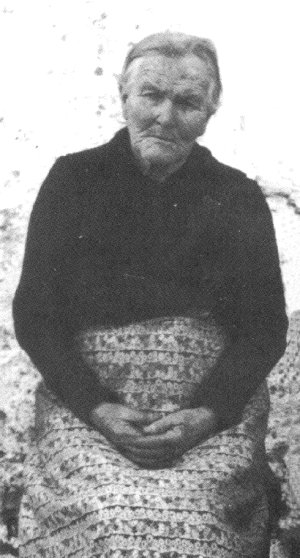 To move to the second of these CDs is to move from the world of the sean nós in general to the world of the individual performer.  It is, in fact, to a lamentably small portion of that world (containing a frightening warning about how not to treat valuable archive material).  Róise na nAmhrán is a nickname of the singer, it means Rose of the Songs.  As Róise Bean Mhic Grianna (Mrs Rose Green), of Arranmore Island, Donegal, she was visited by Radio Éireann in May 1953, when she recorded some fifty songs at a single sitting. Unfortunately, less than half that total is featured here, the original acetates having been thrown out for dumping before their collector, Proinsias Ó Conluain, realised their fate and reclaimed them.  What we hear is all that could be rendered playable.

What matters is not just how many songs she knew, but the quality of her singing.  I can honestly say that this is one of the most enthralling records I have ever listened to.  Like a compelling book, I just couldn't turn away from it.  It's hard to say why.  I have heard much showier singers, and at first hearing, most of the skills of the sean nós seem lost to old age (she was seventy four at the time).  But the sean nós doesn't always yield up it's secrets easily.  Language difficulties, plus a lack of familiarity with, presumably, localised melodies, make it difficult for me to comment.  However, it is possible to detect occasional subtle mordants, auxiliary and sustained notes, and some startling shifts of rhythm.  Ultimately though, it is not technique which wins the ear, it is the same quality of spirit which distinguishes the singers on Amhráin ar an Sean Nós.

Apart from two songs in English, The Lily of the West and The Star of Philipstown, the disc is entirely in Irish; a mixture of local creations and compositions with a wider currency, such as An Bonnán Buí and Bean an Fhir Rua. These two will be known to English readers in their respective translations, as The Yellow Bittern and The Red Haired Man's Wife.  Interestingly, Róise Bean Mhic Grianna's version of this latter song is not centred on the usual lovelorn young man, but on the travelling tailor, a figure notorious in Irish folklore as an opportunistic philanderer.

Full marks to everyone concerned with this production.  The recordings have come up extremely well considering the fate they suffered, and the booklet, this time with translations and detailed notes, is exemplary.  If you are unfamiliar with Gaelic singing, Amhraín ar an Sean Nós will open up vistas, but I do urge you to listen to Róise na nAhmrán.  Don't be put off by the language barrier.  Music is its own form of empathy and it transcends all the difficulties of human communication.  I refuse to believe that anybody could be less than deeply moved by these two discs.

As far as we know, the only source of RTE recordings in England is VETERAN - you can get to their web site via our Links page.