On this CD we have what must surely be amongst some of the best sean-nůs singers to be found in Ireland today.  Four highly accomplished performers bringing us fifteen songs mainly from Connemara, Donegal and Waterford - three gaeltacht regions well known for their amhrŠnaŪ 'gus amhrŠin (singers and songs).

The singers take four songs apiece, except for Antaine ” FarachŠin who performs three - one of those though being over eleven minutes in length.  That song An Casideach BŠn is for me one of the highlights of this CD (sound clip). 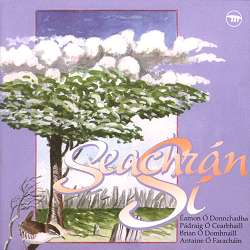 I had met Antaine singing at the Sidmouth Folk Festival in England a few years ago, when he was over with a group of singers from An GůilŪn, a singers' club that meets regularly in Christchurch, Dublin.  He was in great voice on that occasion and he certainly is here too.  Beautiful phrasing, melodic variation and a wonderfully unhurried delivery that takes us back to a time when people would relish each and every word and phrase of a performance, and could live the song and story along with the singer and take real pity on the plight of this fallen priest, the Fair-haired Cassidy (An Casideach BŠn).

There are echoes of Joe Heaney's performance in the singing of …amon ” Donnchadha, hardly surprising when you consider that, although raised in Dublin, he has spent a fair bit of time over in Connemara listening to and soaking up the ornamented style that the area is rightly famous for.  His mastery of the art is evident in his rendition of the well known Eileanůir na Rķn, a virtual benchmark of Connacht sean-nůs.  …amon proves here that he has listened well and learned from all those that have gone before him.

The sean-nůs singing of An Rinn, Co Waterford, is mostly associated with the late NicolŠs TůibŪn from Rinn na gCuanach, and thankfully that style is very much alive and represented here for us by PŠdraig ” Cearbhaill.  An Binsin Luachra is given a good outing here, as is a song I've not heard before, Nůra an Chķill ŕmair.  This is an unusual song concerning a prince from London declaring his love for the amber-locked Nůra in fluent Irish.  I've heard a London prince trying his hand at the Welsh language before, but never as Gaeilge.  'Twould be interesting, mind.

Finally, Brian ” Domhnaill - a singer from Anagaire, Co Donegal.  Donegal is very much on the map as a singers' county now, what with Maighrťad NŪ Mhaonaigh, MŠire NŪ BhraonŠin and her sister Enya, and the siblings TrŪona, MicheŠl and Maighrťad NŪ Dhomhnaill, amongst others, bringing the traditional and contemporary songs of TŪr Chonaill to a world-wide audience.  NŪl Sť 'na LŠ is a song well known throughout the whole of Ireland, with differing versions from top to bottom of the country.  The version that Brian has comes from the singing of NeilŪ NŪ Dhomhnaill (an aunt of the aforementioned ” Dhomhnaills, and a source of a great many Donegal songs in both Irish and English), sung with great rhythm, pace and energy.

But wait 'til you hear Brian sing CitŪ NŪ Eadhra, also from NeilŪ NŪ Dhomhnaill.  It is an incredibly emotive and impressive performance (sound clip), and a fitting end to an altogether marvellous CD.

Clů Iar-Connachta must be congratulated on not only this release but for all the great work they have done and are continuing to do, making the Irish language accessible to speakers and non-speakers alike.  The sleeve notes are always very informative in giving backgrounds to the songs and the performers, and you can always rely on their song and text transcriptions completely.  The only gripe I have about 'Seachran Si' is the cover.  I don't like the colour mauve, but if that's my only complaint then I've no complaints.

If you don't have a great knowledge of the sean-nůs tradition then this is a fine place to start, given the differing styles represented here on this CD - and if you are a connoisseur, then this recording won't disappoint in any way, given the mastery and dedication of these four singers and their immaculate choice of songs.