Songs, stories, music and traditions of the County of Somerset
Collected by Bob and Jacqueline Patten 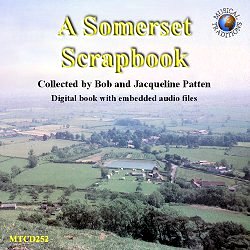 If I had to pick a favourite spot to be on a fine summer's day, then it would be on the top of Glastonbury Tor, looking out across the Somerset Levels.  So, what a pleasure to see the view depicted on the cover of this new Musical Traditions offering.  A Somerset Scrapbook - Songs, stories, music and traditions of the County of Somerset was first issued in 1987 and comprises field recordings made by Bob and Jacqueline Patten, and Dave Bland.  Originally issued as a book and cassette, the package has been remastered onto a CD-ROM and is a delight to both see and hear.  The package comes in 4 parts - singers and songs/players and tunes/tellers and stories/traditions - and I will begin by considering the singers and their songs.

Charles William Showers, the opening singer, was born in Hambridge, in 1906, just three years after Cecil Sharp collected his first song, a version of The Seeds of Love, in the same village.  Here Charlie sings a good version of Seventeen Come Sunday, an abridged version of Ernie Mayne's 1917 hit My Meatless Day, a couple of verses of Tobacco is an Indian Weed and a fragment of a song here titled Old Ale.  A search in Roud (2414) shows this as being the only known version, but I also collected a more complete version, as Good English Ale, from the Cantwell Family of Standlake in Oxfordshire, which Steve Roud list as number 1512 in his index.  Charlie also contributes two good versions of We Hunted All Around and Richard of Taunton Deane.  This new reissue lists a few additional references to the songs, but misses the important Appalachian version of We Hunted All Around (as 3 Men Went a Huntin') that was recorded by Byrd Moore and His Hot Shots in 1929 (re-issued on County CD Greenback Dollar. The Music of Clarence 'Tom' Ashley 1929 - 1933 - County CD-3520.)

Another singer, Amy Ford, was the granddaughter of Frederick Crossman, one of Cecil Sharp's Somerset singers, and a Musical Traditions article about Mrs Ford, by Bob & Jacqueline Patten, is also included on the CD-ROM.  We are told that 'Her repertoire contained folk songs and ballads alongside Victorian and later popular songs and she kept almost all her song texts in two school exercise books'.  We all know that the Copper Family of Sussex kept their song texts in a book and I am sure that the practice was once far more widespread than we realise.  I especially like Amy's version of As I Walked Through the Meadows, a song that Cecil Sharp also noted from her grandfather, 'while they sat on the trunk of a fallen apple tree in his orchard.' She also had a good version of The Man You Don't Meet Every Day, another of her grandfather's songs, though, surprisingly, mention is not made of a version collected from the Kentish gypsy Lena Jones, and available on Musical Traditions CD Here's Luck to a Man (MTCD-320).

Austin Wookey gave the Patten's a good version of the seldom heard ballad The Coal Black Smith (The Two Magicians), which probably came from the version collected by Cecil Sharp from a singer in Minehead.  I cannot imagine how the Patten's felt when they were told of another Minehead singer, then deceased, who had known two versions of the ballad! Austin also supplied a short Bird Scaring Song, though he performs it more as a chant than a song, which is just about identical to a version that the gypsy Jasper Smith once gave to me.  In Jasper's case the song was actually sung to a recognisable tune.

There are also recordings of The Three Crows, sung by Harry Adams, A Jolly Farmer's Boy Be I, sung by Eddie Cornelius, Down in the Fields Where the Buttercups Grow, sung by Cliff Rowe, and Peter the Miller, sung by George Withers, a singer who later became quite well known on the folk scene.  Two of Cliff Rowe's other songs are printed, text and tune, though there are no recordings to be heard.  This is sad, because one of the songs is a rare example of an industrial song.  The Norton Fitzwarren Railway Disaster was thought by the singer to refer to an accident that occurred on the night of 10th - 11th November, 1890, at Norton Fitzwarren, although the song's text actually refers to a near-miss, rather than a collision, and so may, in fact, refer to another event.  The other song, The Midnight Mail, sounds as though it could be from the Music Hall.  It is hard to tell because Mr Rowe only knew the chorus.

Surprisingly, there are no Wassail songs included, though the photograph of Charlie Showers was taken one night when he was out with the Drayton Wassailers.

Part 2 contains eleven tunes, most of which are quite well-known.  I especially like the opening track of the Kingsbury Episcopi Band playing The Kingsbury Jig, which is better known as The Oyster Girl.  It is a spirited performance and seems to have once been played to accompany a longways dance, although at least one person remembered it being used for a circle dance.  The singer Harry Adams remembered the following mnemonic verse:

Saturday night I lost my wife
And where do you think I found her?
Up in the moon, playing a tune,
With all the girls around her.

And this reminds me of the verse that Appalachian singer Dan Tate used to sing in his song Old Grey Goose:

Johnny Gordon lost his wife,
And where do you reckon he found her?
He found her up that rocky branch,
With a hundred men around her.

Harmonica player Alfie Collins gives us The Manchester Hornpipe and Harvest Home, while Wilfred Williams, another harmonica player, provides us with versions of The Keel Row, here called The Cat's Got the Measles, and Cock of the North, which is better known as The Gay Gordons. Wilfred Williams was the husband of Ada Baker, formerly of Withypool, who in 1914 had sung a version of the carol Come All You Worthy Christian Men to Cecil Sharp.  The Pattens again: 'Sixty six years later we made some enquiries in the village and were told that Miss Baker, now Mrs Wilfred Williams, lived at Exford.  We duly set off for Exford and found Mrs Williams, but unfortunately she had no recollection of Sharp or the carol.'  The final harmonica player heard here is Victor Witcombe, who plays The Rigs O' Marlow/Bricks and Mortar at quite a cracking pace.  Sadly, he only plays the latter tune once through.  I would have loved to have heard more because I cannot say that I have ever heard the tune before.  Finally, there are four melodeon players, George Pennecard, Peter Butler, Stanley Pearce and John Moore, who give us versions of Soldier's Joy, The Wild Colonial Boy, Ring the Bell Watchman/Click Go the Shears and Heel and Toe/Sultan Polka.

There are ten stories in Part 3, all but one told by some of the previously heard singers and musicians.  The exception is Wilfred Norman, who gives us three good, if short, tales.  The first, Fanny Pope, is a version of the story that my grandfather told to me about a witch who turned herself into a hare.  (See Musical Traditions article MT260 - Once Upon a Time).  The Squire of Bickham is a short ghost story, while Gunpowder in the Pole is even shorter, but comes with an explosive ending.  Austen Wookey's Good Friday is one of many fine stories that revolve around a conversation between a vicar and one of his parishioners.  Here a lady is being rebuked for doing her washing on Easter Friday.  The conversation ends thus:

A vicar also features in Charlie Shower's comic tale The Sheep's Head and the Dumplings.  The notes suggest that, 'in a small agricultural community (vicars) were not normally masters, mates or relatives' and so were fair game for the story-tellers.  But, I would also add that such stories could be used by villagers to make sure that the incumbent did not rise too far above his station.  In other words, stories such as these could, and sometimes were, used as a form of social control.

Other stories tell of the Devil throwing a large stone at a local church, of rural 'rustics', and of a legend associated with Wadham's Castle.

The final part of the scrapbook consists of descriptions of various Somerset traditions, such as 'Egg Shackling', where numbered eggs were shaken (or 'shackled') in a sieve.  The eggs, of course, broke until there was only one egg left.  The owner, and winner, was revealed by the number on the side of the surviving egg. 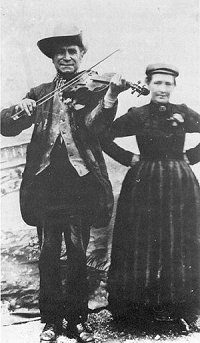 This was a Shrove Tuesday custom and was carried out at various Somerset schools.  Step dancing and broom dancing, unlike 'Egg Shacking' were not, of course, restricted to Somerset, though they were, at one time, very popular.  According to the singer Austin Wookey, "In the village life, of course, on fair days they always had the step dancing with a concertina and accordions and one old man, by the name of Joby Hand, I can remember, when I was about three years old ... he did the dancing from his heels, exactly as the Russians do on our television stages today.  And he had a song to go with that, he'd do it and sing, but I can't remember the song now."  Mention is also made of Morris Dancing having been known in Somerset during the 17th and 18th centuries.  It seems to have died out by the time Cecil Sharp visited the area, though Sharp did, apparently, teach some dances to Somerset school children, when he wasn't collecting songs.

There is also mention of Henry, or Harry, Cave, (1854 - 1907) an itinerant musician who travelled around north Somerset, playing the fiddle for dances and suchlike.  Described on his Christening record as being 'half-gypsy', he gave a number of tunes to Cecil Sharp who, the next day, visited Henry's father, who, in turn, gave him another six tunes.  Another person mentioned is Alfred Charles Parfitt, known as 'Coffee' or 'Korfie', a step-dancer whose name is found in Cecil Sharp's notebooks, although Sharp does not appear to have actually met up with him.

A Somerset Scrapbook - Songs, stories, music and traditions of the County of Somerset was clearly assembled by Bob and Jacqueline Patten out of love, not only for Somerset, but also for all the singers, musicians, story-tellers and others who helped them in their research.  It is that rare thing, a serious work that is also a joy to read and hear.  I wonder what other songs, tunes and stories remain in the Patten's archives.  Could there be enough for another volume, I wonder?