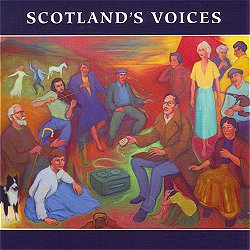 Scotland's folk record labels release a lot of compilation albums.  One of the markets that they cater for is the 'heritage' one and I'm pretty sure that many foreign tourists go into department and record stores looking for some aspect of Scottish culture to take home with them.  Much of it, sadly is made up of various aspects of tartan kitsch though Greentrax compilations usually have a feel of authentic culture about them.  Opening the package and seeing that it was from Greentrax, my interest was aroused.  It wasn't until I turned it over and read the contents that I realised that here was a well selected collection of aural gold nuggets.

Many of us (including those who run this website) who went to the TMSA festivals in Blairgowrie, Kinross and elsewhere in the few years around 1970 had an experience which helped formulate their views on traditional song and music and guide their future attitudes towards it.  Here were a sizeable bunch, superb performers in their different ways, who had formed their singing styles and attitudes to life in their communities before the folk revival came along and it was mesmerising.  Belle Stewart in her famed composition The Berry Fields o Blair here sings:

But afore I put my pen awa,
It's this I would like to say:
You'll travel far afore you'll meet
A kinder lot than they;
For I've mixed wi' them in field and pub
And while I've breath to spare,
I'll bless the hand that led me tae
The berry fields o Blair.

… but the same could be written about the festival and the chances available to young enthusiasts.  Opportunities to meet and learn and form friendships across age differences were plentiful; occasions to learn about life and music were freely available.  The reviewer must question himself here.  Is he just being nostalgic for the halcyon days of his youth or is there something of timeless value and importance here.  Listening again to the opening tracks is enough to settle the matter in his mind.  MacCrimmon's Lament sung by Jeannie is outstanding singing in anyone's book.  Leaving aside the old arguments about the pace of her singing; her delivery, her involvement with the song, her emotional intensity … this level is rarely reached.  From that we go on to Jimmy's gravelly voiced Doric intoning what could be his autobiography.  Next, we are in the presence of the steady stately delivery of the utterly admirable border shepherd and then a couple later it's the compelling, absorbing, enthralling musical rule-breaker Davie Stewart.  No, this is not wistful reminiscence; these singing performances are magnificent!

All but two of the performances here could have been heard at least one of these festivals.  Hugh MacDairmaid's antipathy towards the folk revival and folk culture is well known from his 'public flyting' with Hamish Henderson, so his presence at a festival that celebrated this was not likely.  The other is Allan MacDonald who was probably just too young to be at these epoch-making events.  However, his fine Gaelic singing to his own small pipes playing is well worthy of inclusion here as well as reminder that Scotland's older language was well represented at these festivals.  Dolina MacLennan and Flora McNeill, Mhic Iain 'Ic Sheumais, represent the hugely impressive traditions of that language here.  Flora at Kinross seemed to be an eminently approachable, friendly everyday person; it was only when she started singing the Orain Mor of that tradition that her magnificent artistry was revealed.

Clearly, this review in aimed at the readers that Musical Traditions so at this stage, it needs to be pointed out that it is not the Traditional Music & Song Association of Scotland, nor its memorable festivals that are the being celebrated in this release, but the painting that is reproduced on the cover.  Rather than stray off the ambit of this site, for more details of the painting and of Sandy Moffat the artist, have a look at the article in The Scotsman on him at: http://www.heraldscotland.com/news/15525286.Visual_Art_Alexander_Moffat_39_s_Scotland_39_s_Voices_The_Saltire_Society_Edinburgh/

The central figure of the painting holding a microphone is clearly that complicated and admirable man, Hamish Henderson.  Deservedly, he is accorded the final track in this compilation with the song that he is best known for, The Freedom Come All Ye; the song that he described as "expressing my hopes for Scotland, and for the survival of humanity on this beleaguered planet."  Too often, this song is given declamatory, anthemic treatment.  Here the way Hamish sings it brings out its thoughtful, reflective qualities.