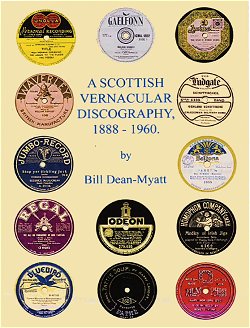 A courier chap knocked on my door with a parcel that was far too big to go through the letterbox, containing this huge book.  God knows what it must have cost to post ... it's 35mm thick and, with packaging, weighs almost 2kg!

Having had a quick look through it, I decided that the only person who would know enough about the subject matter to review it would be ... Bill Dean-Myatt!  So I thought I'd have a go myself - which is what Bill asked - and avoid the cost of sending it to someone else to review.

So - let's have a look at what this Discography has to offer.  The simplest way is to quote from the press release:

This work is the result of twenty years research in to recordings made in the British Isles of music and performance relevant to Scotland.  The work is inclusive rather than exclusive and has tried to include everything and anything that seems relevant or interesting.  This is the very first time that all this data has been gathered together in one place for easy reference .........  This work will be invaluable to the historian of Scottish popular culture, the sociologist, the musicologist, the student of Burns' songs, those interested in changes in performance styles, Scottish music hall, historians of the bagpipe, the radio show presenter, the reference department of the public library and so on.  And, of course, for the record collector and anyone else with an interest in Scottish popular culture.

Over the course of more than 600 pages artists are listed alphabetically with details of their recordings.  You will find here - the artist's real name if it differs from the name on the record together with their dates and locations of birth and death, accompanying musicians' names and/or the instrument played on the record, date and location of the recording session, master and take number, repertoire together with composer and arranger details, all known issues on 78, 45, EP, LP and cylinder released anywhere in the World and finally, where necessary, there are explanatory footnotes.  It is fully cross referenced so that the use of pseudonyms, which was extensive in the record industry, is now revealed ............

A gallery of over 100 record label pictures gives an indication of the variety of labels that issued Scottish recordings, as well as the changes in label design that occurred over the period covered by this work.

Now I'll be the first to admit that I know next to nothing about 78rpm records (let alone cylinders) of the end of the 19th and early 20th centuries ... but in a way, I'm not sure that matters too much.  Included with the book is a two and a half page 'additions and corrections' note - and one can be certan that there are probably others to be found by aficionados of the genre.  That's not really the point - the point is whether this huge tome successfully does what it sets out to do.  And that's something I think I do know something about.

As the accompanying press release implies, this publication is probably aimed more towards the Library market that to the likes of us and, as such, the cost - Ł39 + Ł10 P&P - might well not be too much of an issue.  For the likes of us it would be, and so the next thing I noticed about it - a CD attached to the inside of the back cover - gave me a nasty surprise.  It doesn't, as you might suppose, contain selected tracks from Bill Dean-Myatt's favourite recordings, but the entire text of the book, plus an 'Artists Index' and 170 colour illustrations of disc labels.  What's 'nasty' about this is that you could have had all the information contained in the book on this one CD for about a fiver, including P&P, and saved several trees!  And it has to be said that, unless you have a particular love for actually holding a real book in your hands (and this is just a spiral-bound ream and a quarter of printed text - no, the 170 disc label illustrations are not printed), finding a particular piece of data amongst 625 pages is no easy matter.

Furthermore, the press release calls this CD 'searchable' - which it would be if the whole text had been supplied in one document.  However, it actually contains 10 separate Microsoft Word documents, making any sort of cross-referencing or searching a dreadfully time-consuming process, since there's no hypertext linking between the documents, or even within each one.  True, you can Search the main Discography file, but that doesn't easily reveal too much in the way of information unless you know exactly what you're looking for.  Also, the 'Artists Index' is laid out in a table - but not a database type table, so one can't sort any of the headings to extract information out of the vast lump of data except by the fairly laboroius process of selecting the entire table, finding Search in Word, and then choosing which Fields to sort on.  This is a shame, as it's perfectly possible to include a Microsoft Access document in a Word file.  Had it been me, I would have turned the whole lot into HTML files (like the House Dance or Morris Dancing CD-ROMs I produced for MT Records) - or even into a single PDF - allowing linking, and therefore straightforward cross-referencing and searching.

I was reminded, painfully, of my having to review the William Kimber Absolutely Classic CD, back in 1999, and my response to the 'enhanced' part of the disc - 'I am much impressed by the EFDSS's bold step in adopting such a forward-looking approach and using such up-to-date technology - but I do wish they'd asked someone with a rather better idea of how to design for it.'  Because the Scottish Vernacular Discography CD could easily have been made very useful ... all it does now is to make you regret having paid almost Ł50 for 625 sheets of paper!

So, I must applaud Bill Dean-Myatt for a stupendous piece of research work, express my awe for the determination and perseverance he displayed in the twenty years it took him to do it.  However, my congratulations do not extend to the publishers, The City of London Phonograph & Gramophone Society, who seem to have done little except print Bill's text when, with a little thought and very little extra work, they could have published something very useful and worthwhile.  This is a 21st century publication, but it seems to have taken account of nothing of present day techniques, beyond a very second-rate CD.  It is scarcely more developed than a 19th century publication of this sort - with the skills of the 19th century printer and book-binder replaced by Prontaprint and plastic comb binding.  For Ł39 + Ł10 P&P, this really isn't good enough!