Will Duke and Dan Quinn

Scanned: music for lungs and bellows

This is a record which really ought to have been made twenty five years ago.  In the mid ‘70s there was a large audience for traditional revival music and song - much more so than today - and they would have just loved this.  Ironically, it’s also a record which really couldn’t have been made twenty five years ago because none of us then had the maturity or the experience necessary for the job.  We hadn’t paid our dues. 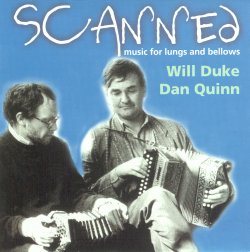 Today, Will and Dan certainly have - and the maturity and experience they’ve gained over the years, blended with such an obvious love of the material, produce an absolutely delightful CD.

It's also a considerable step forward from their previous Wild Boys CD - though this is in no way a criticism of that excellent record.  But Scanned is far more assured - it sounds like a record of what they do, rather than what they're attempting.  The music tracks, particularly, have lost that imitative quality which - while interesting and enjoyable - marked the previous disc as being a 'work-in-progress'.  In its review I said that it was difficult to believe that Scan Tester wasn't in the studio with them - on the present one it's very obviously Will and Dan you hear.  The point being that they're now playing their music, not Scan's!  They have been 'Scanned' - and these are the results.

It may be a very small point, but I think it's of considerable significance.  We have now moved on, to a situation where terms like 'traditional revivalist' cease to have any real meaning.  Players and singers like Will and Dan (and a good many others around the country) are no longer attempting to revive a pre-existing traditional culture - rather, they are continuing it on their own terms.  I would go further and suggest that, for many such people, the new culture in which they work is as valid, as vibrant, and sometimes as complex, as the older one.  And, if you apply up-to-date versions of such concepts as community, transmission, subculture and oral ... then it is also 'traditional', too.

Unison singing is perhaps the most difficult form in which to express emotion.  Solo is easiest; group work can use sheer noise or unexpected harmonies.  Unison requires that deep sympathy and instinctive understanding usually only found in siblings - the Keane sisters are an obvious example.  Dan and Will have come a long way towards achieving a similar level of excellence.  The songs on Scanned are great: we start and finish with those two comic delights from their current repertoire Here We Are and Father Had a Knife.  Between these bookends I'm pleased to find Walter Pardon's Rakish Young Fellow, Martin Gorman's Little Drummer, and Mary Ann Haynes' Long a-Growing, Old Miser and Ball of Yarn.  All are superb.

There's also a very nice little technical trick employed, which says something about the care taken over the production.  The first song is immediately followed by the tunes of the second track, Scan Tester's Polkas, without a break, so that it sounds as if it's all one track - but you can still select track 2 on its own if you need to.  This is achieved by defeating the deafult 2 second inter-track gap - neat!

On Seán Corcoran's delightful ACNI cassette Here is a Health we find four songs from the Landlady of the Linnet Bar in Boho, Fermanagh, the wonderful Annie MacKenzie  My favourite, and perhaps Dan and Will's, is Coleraine Town - and this, too, is included here.  It has acquired an accompaniment, a considerable increase in pace and a positively jaunty delivery.  For a song dealing with abandonment and multiple suicide, this seems inappropriate - to say the least!

That one instance aside, I find this a truly excellent CD and almost without fault.  I hope it's an augur of things to come - either from Will and Dan, or from a few others I can think of - and I unhesitatingly recommend it.