an evocation of times gone by in music and song 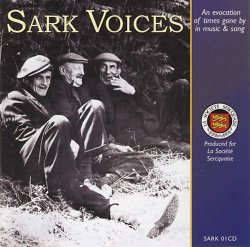 It's become fashionable to blame computers for all the ills of the world - rather than their users, or programmers - but I think they are truly wonderful!  Without them, you would not be reading this magazine nor, more importantly, would you be able to enjoy the thousands of hours of traditional music which is now instantly and cheaply available.  None but the elite few would have ever heard the recordings in the British Library Sound Archives - many of which are now available online - nor those of the growing numbers of other similar institutions currently being digitised.  And certainly, none of the 60+ Musical Traditions Records' CDs would have ever existed.

And now we hear of yet another piece of this digital bounty; I had the following from Ken Lees a couple of days ago:

As you probably know, I have been travelling to Sark regularly over the past fifty years.  While there this spring I was introduced to the Conservator of the Sark Archives for La Société Sercquaise, Richard Axton.  I told him of my interest in traditional music, and said that I knew of a few tracks coming from Sark on Peter Kennedy's tapes.  He then came out with the wonderful news that someone from the BBC had sent La Société Sercquaise all the Channel Islands music and song in their archives, digitally remastered.  I now have all of this copied, and this first CD is the result of some detailed work.  I chose the tracks and designed the thing, while Richard wrote the notes and did the translations.  With the help of surviving patios speakers and other locals we have, I hope, done some justice to Sark gone by.  I have enough material for another two or three Sark CDs.

Well!  Who would have thought it?  Auntie Beeb doing the decent thing!  The only heartbreakingly sad part of the whole digital renaissance is that, now all this stuff is available, there are so pitifully few people interested in listening to it!  Indeed, this present CD may sell better than many, since a good proportion of the island's 600 inhabitants might well want a copy - probably doubling the sales figures of MT's best selling records!

The CD contains two sets of BBC recordings: some made in 1938 by an, as yet, unknown hand: and some made in 1957 by Peter Kennedy.  It's no surprise that the latter are of a far better recording quality, but the former are all perfectly OK to listen to, despite some surface noise from the 78rpm discs.

As far as I'm aware, the only one to have been made publicly available before is The Whale-Fishers' Song, sung by Philip Hamon and Hilary Carré (sound clip), which appeared on the Caedmon/Topic Folksongs of Britain LP Sailormen & Servingmen (Topic 12T194).  This is also the only track wholly in English in this selection, the others being in the local patios or in French.  Indeed, one might say that this is the only English song on the disc, since it's actually The Greenland Whale Fishery in a fairly standard version, but with a couple of 'local' verses on the end:

As mentioned, the other songs are either in French or the Sark patois, but all have been transcribed, and translated into English in the booklet, which also contains a brief summary and comments about each track.  As well as songs, there are a couple of well-played and lively tunes on melodeon by Leonard Balloeil, a short snatch of haymakers' chat, and a comic recitation by Fred Baker in true Sark patois.  Sark is one island, but almost two, since Big Sark and Little Sark are joined by a narrow isthmus called La Coupée which is 90 metres long and has a drop of 100 metres on each side.  Ken Lees tells me that when they tried to get Fred Baker's L'Amitie translated, their 95-year-old assistant couldn't understand most of it, because he spoke Big Sark dialect, whilst Fred Baker spoke Little Sark!

This is a lovely CD - the result of a fascinating project, and one which I hope produces further, equally enjoyable results.  Apparently, at the official launch last Friday, 190 copies were sold, so that's a great start.  Although there remain only about 30 Sark-born residents on the island, I would guess that there will be many others around the world who, like Ken, have a keen interest in the island's history and culture.

You can get this CD from Veteran Records (www.veteran.co.uk), or from Ken (ken.lees@clara.co.uk), who will do mail order from home at Ł12 inc p&p.  Also on sale at the Sark Visitors Centre at Ł12.