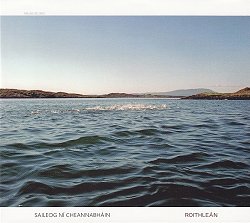 Saileog Ni Cheannabhain is a young singer and musician from Connemara.  This is her second CD; her previous CD was a selection of a dozen Connemara sean nós songs collected in the 1940s by Seamus Ennis.  Saileog got her singing from her father Peadar O'Ceannabhain, who released a fine CD of songs twenty years ago, and her music from her mother, Una Lawler, who is a classical violinist.  In addition to five songs, this CD is a showcase for Saileog's tune playing on piano, fiddle and viola.  It's a bit of a marathon, clocking in at over 79 minutes across 17 tracks.  Her brother, sister and a few musical friends join in on flute, fiddle and concertina to add more variety.

The CD kicks off with a selection of reels played on an upright piano.  This is Saileog's main instrument but as a melody instrument it has a very short history in Irish traditional music.  Michael O'Suilleabhean popularised, or at least validated, the piano under his self styled Hiberno-Jazz as a vehicle to provide more than just accompaniment; but it is still rare to hear tunes played on piano.  There seems to be a stronger tradition in Cape Breton and Scottish music and perhaps this has influenced Saileog in her use of very modern, slightly jazzy accompaniment using staccato chords and syncopation.  However, the natural pulse and flow of the tunes is missing and the later set of Paddy Fahy tunes doesn't sound right to our ears; a more traditional approach brings out the best in Fahy's already unconventional tunes.

The viola too is rare in Irish music and it seems to be a difficult instrument to carry the subtle nuances of traditional dance tunes and Saileog has a style that focuses on mood rather than drive.  Those musicians that have used a viola on recordings tend use it as an occasional variation.  Sadly we don't get any solo fiddle to judge whether that would have provided opportunities for a lighter touch, crisper ornamentation or more fluid variation.  Six of the tunes are Saileog's own compositions and while they sit well in the traditional idiom they lack memorable hooks or twists.

The songs are the highlights, delivered in the true sean nós style.  Saileog's voice is a bit breathy but the ornamentation is sensitive and honest to the tradition.  In the one duet, with her sister, she sings the old Connemara ballad Uileacán Dubh Ó.  The air is well known through its associations with the Napoleonic ballads but it is refreshing to hear the Irish language love song sung here.  She sings Róisín Dubh to Seán 'Ac Donncha's air rather than the more familiar Joe Heaney air that Seán O'Riada used for his Mise Eire theme.

The CD has been well recorded and technically produced by Jack Talty and there are detailed sleeve notes.  However, this is a very long CD, not just in the number of tracks but in the length of each track as well.  Just as a good writer needs a critical editor, the producer here perhaps could have been more effective in keeping the CD more focused.  The listener easily loses interest when tunes are each repeated three or more times without real musical variation or technical virtuosity to hold your attention.  The length of the recording takes away from the entertainment value of the whole CD.  Dropping half of the piano tracks and editing down the other tune selections would have resulted in a CD of maybe 50 minutes with more listener appeal.