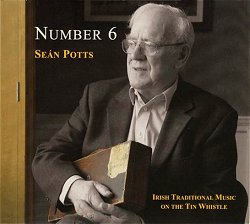 Seán Potts of Dublin is probably still best known as the tin whistle player with the Chieftains even though he left the group 30 years ago.  Now, approaching his eightieth birthday Seán releases his first solo recording and it's a fitting showcase of his music and a tribute to his heritage.  Number 6 refers to the house in the Coombe in Dublin's Liberties where his grandfather John Potts lived.  John Potts was a piper and music teacher and Number 6 was a popular visiting place for musicians back in the 1930s when Seán was growing up.  Seán himself started on the uilleann pipes at the age of 7 but the tin whistle was easier and more discreet at a time when traditional music was not very popular.

Nevertheless Seán upheld the family tradition and kept playing, and in his twenties took up the flute.  In the late '50s he was part of the group of Dublin musicians recruited by Seán O'Riada for his experiments in arranging traditional music.  This group went on to become The Chieftains.  Seán gave up the professional musician's life in 1979.  Since then, he has devoted a lot of his time to promoting and supporting Na Píobairí Uilleann, the association of uilleann pipers, serving as Honorary Secretary, then chairman, and since 2002 he has been the Honorary President.  His championing of NPU continues through this CD as all proceeds will go to the organisation.

There's a good selection of mostly older tunes and the music on the CD reflects Seán's long and fruitful association with the greats of the Dublin music scene.  A number of the tunes here come from sources such as Sonny Brogan and John Egan.  His uncle, the enigmatic fiddler Tommy Potts is remembered in a nice pairing of the Tap Room and the Liffey Banks.  The influence of pipers, from his grandfather, to Willie Clancy and Seamus Ennis is also very much to the fore and Seán's longtime musical sparring partner Paddy Moloney has enriched his repertoire.

Seán's whistle style is quite unusual.  There's a hint of John Potts' tight piping technique in Seán's way of tonguing the tunes and in his choice of ornamentation that's evident from the very first track, two jigs, one from Conemara the other from Clare.  Tunes associated with Co Galway, Cooley's Reel and The Copperplate, immortalised by Kieran Collins, get a Dublin treatment that revitalises a pair of tunes that suffer too often in the hands of beginners.  Many of the tunes are well known, and fans of the Chieftains can look back from this CD and see the influence Seán had on the repertoire and style of that group that too often seemed to be dominated by Paddy Moloney and you almost wonder if these tunes are well known because Seán recorded them back in the '60s and '70s.

John Blake provides tasteful accompaniment on guitar or piano and Seán is joined by a couple of guest musicians with Paddy Glackin on fiddle and Seán's son Seán Óg on uilleann pipes.  The duets add variety but the tracks with the pipes probably work less well than those with the fiddle.  While we don't get a breakdown of which make of whistle is used on each track there are obviously a number of different whistles used.  Seán Óg provides brief but well researched comments on each of the 20 tracks in the sleeve notes.

Seán Potts is renowned for his slow air playing, whether in session or concert and this CD includes eight examples, from the sprightly 18th century harp piece Eibhlí Gheal Chiúin Ní Chearbhaill to the great airs like Geaftaí Bhaile Buí and Aisling Gheal which, like a couple of other airs on the record, Seán learnt from Seán O'Riada.  John Blake's accompaniment adds to the quality of the airs and Peadar O'Riada adds some interesting organ to Aisling Gheal.  The CD ends with a duet with Paddy Glackin of a Gweedore lament with a curious title that translates as the First Tuesday of Autumn that O'Riada played as a solo on the 1969 LP O'Riada sa Gaiety.

The rhythm is steady rather than driving, but it's difficult to get a feel for the style when it is broken up by the number of slow tunes on the record.  It feels like a bit too much to listen to the entire CD in one sitting.  It's more a record to dip into and enjoy.  Available from NPU at www.pipers.ie, Claddagh Records or Custy's website, this would make a welcome addition to the record collection of anybody who likes traditional Irish music played as it should be.