Ground of its Own

The Ballad of George Collins;  On Yonder Hill;  Wild Wood Amber;  Goodbye My Darling;  The Jews Garden;  The Tan Yard Side;  Northlands;  My Ausheen - My Old Shoes. 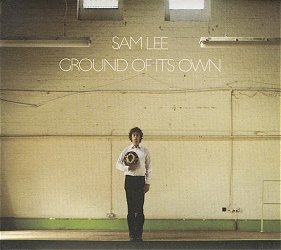 This is a record I've been waiting to hear for a good while, and one I very much wanted to like but, as can be so often the case, the final result is a bit disappointing.  All the songs are good traditional items, rebuilt to suit Sam's take on them (no problems with that, I assure you), but the 'why' of some of the re-building isn't clear to me - nor does it seem to be explained in the often obscure booklet comments about the songs.

Then there's the singing.  I've been lucky enough to have heard Sam's singing for some five or so years, in which time he's developed and matured into a very impressive, if somewhat mannered, traditional-style singer - live, that is.  But on this CD he sounds more like a crooner in many places.

Sam's thoughts about the record have been widely aired in the media recently, and much of the detail has been about the accompaniments.  These are indeed very impressive - adventurous, interesting, and beautifully executed.  They certainly do the job of creating a mood for the songs, and injecting drama and emotion into the performances.  But, surely, that's the job of the singer?  It's pretty difficult to imagine what the solo vocal track would sound like without the accompaniments, but my impression is that some of it would be a bit flat.  I feel that this may be as a result of these finely textured accompaniments - Sam hasn't needed to sing in the emotional, passionate way that I know that he can, because the backings are doing that for him.

This is the problem with accompaniments to traditional songs - they seldom do more that distract.  These songs are perfectly able to stand on their own - people wouldn't still be singing them otherwise - and they've proved their worth down the decades, or centuries, in some cases.  To introduce an external element which distracts from the song can only be a negative move.  Very few people can do non-distracting accompaniments - and very few of them live in England.  Here, the extensive and multi-layered accompaniments do, extensively, distract from the songs.

Another problem with accompaniments is that rhythmic ones tend to straight-jacket the singer into the simple rhythm being played, rather than allow him/her to follow the more complex 'pulse' inherent in the song's text and its meaning for the singer.  Happily, that is rarely a problem here.

I feel that this CD is a presentation package designed to display Sam Lee as an intriguing and ambiguous performer.  Certainly, the song notes say as much about Sam as they do about the songs - and then there's the quirky way the texts are printed upside-down from the back, so you have to turn the booklet over to read them - that is, if you have good eyesight and strong lighting!  Many of the songs are strangely re-titled - particularly The Outlandish Knight, which is Northlands in the booklet but Northlancs on the sleeve.  And why on earth do we get a verse of Jane Turriff's What Can a Young Lassie Dae wi an Auld Man (lovely though it is) tacked on the front of My Old Shoes?