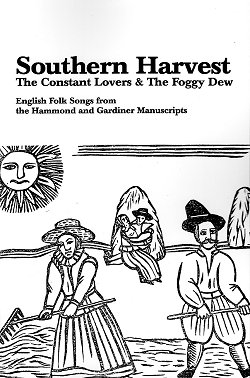 I'm very pleased to report that this substantial 326 page book turned up within a week of its publication - unlike the two previous volumes of this excellent re-publication of Frank Purslow's 1960s masterwork.  I'm also pleased to report that it not only includes the singers' biographies promised in volume 1, but also welcomes Nick Dow as one of the contributors - well, I welcome him!  Nick is a singer whose work on cassette and CD I have long admired, although I don't think we've ever met.  And as a writer he is truly excellent, as his Introduction to this book and several of the singers' biographies clearly show.  Like Steve Roud, his writing feels more like a conversation with the reader, rather than a well-informed lecture.

This new edition of The Constant Lovers and The Foggy Dew contains, in order: a list of all the songs, which are presented in alphbetical order - so this works as an Index as well; the List of Subscribers - in which I am named, although it was my intention that the donation should have been from Musical Traditions; Acknowledgements; Foreword; Preface; and Introduction.  The Acknowledgements, by Steve Gardham, mention: the instigators of and fundraisers for the project, Ron and Jenny Day and the South Riding Folk Arts Network; Graham Pratt who did the re-setting of the scores for both The Wanton Seed and this one; and Nick Dow, Bob Askew, Tim Radford and Steve Jordan for the Singers' Biographies notes.

The short Foreword is by Martin Carthy and reads very like the first part of my recent Enthusiasm No.78 The Ups and Downs; unsurprisingly, since we're of an age, and had much the same experiences.  The short Preface, by Steve Gardham, covers much the same ground as that in the previous volume, but does give some interesting information about Purslow's song editing methods and motivation.  The Introduction, by Nick Dow, is superb, and tells me much I didn't know in its three pages - particularly the fact that many Scots regiments had been stationed along the south coast in the Napoleonic era, and that the people, particularly in Dorset, picked their songs up in considerable numbers.  I also liked his very human portraits of George Gardiner and the Hammond brothers, and similarly, his account of Frank Purslow's work on the four-volume publication is full of fascinating details and clearly imparts Nick's respect for, and admiration of, Purslow's difficult task in creating his mammoth collection.

The songs from The Constant Lovers and The Foggy Dew follow, then the Singers' Biographies, then the Sources, and finally the Index of first lines.  As to the song pages, these are beautifully laid out and easy to read (as with the preceding volumes) and account for 232 pages and (I think) 166 songs.  It's interesting (and pleasing) to note that Purslow's practice of modifying the manuscript texts with extracts from other sources - perfectly understandable in an age when usable song books were very rare - has been abandoned here to an extent, and the original manuscript versions reinstated where Purslow's 'improvements' were deemed arbitrary or inessential.  Steve Gardham's 57 pages of Song Notes are (as in the previous two volumes) exemplary.  They usefully supply the Roud numbers of all songs (for further research possibilities) and give not only 'versions from the tradition' on CD, but also in many instances 'modern versions'.

Given that the original editions of The Constant Lovers and The Foggy Dew cost 50p and 90p respectively, today's price of £15.00 (for 326 pages) seems eminently reasonable - particularly in view of the £12.99 price for The Wanton Seed (202 pages) from the same publishers.

As a musical illiterate, I was interested to read in the Introduction that: There has been sterling work done by Laura Smyth at the VWML, placing MIDI files within the view of many of the songs [on 'The Full English' website].  Sad to say, I was not able to find them - only a request for volunteers to help with this work.  Can anyone tell me where these MIDI files are, please?  If MIDI files of the songs in these books were to be made available, that would be a terrific help to many people interested in the songs but unable to read music.

Finally, in the Introduction, Nick writes that there are still many songs in the manuscripts that are yet to be published; There may be enough for another volume!  Now there's a thought ...  Indeed - some new songs, rather than ones that have been in the public domain for half a century; that would be a thought!

This book represents a fine completion of a great series of new editions - well worth £15.00.