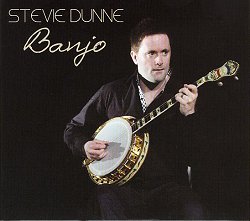 I reviewed Stevie Dunne's first CD, About Time, towards the end of 2010.  I said that I greatly enjoyed the muic although many of the tunes were not traditional.  In this present collection, only 8 of the 29 tunes are not traditional, rather than the 13:14 split on the first record.  I'm not sure if this is why I like this one more - but I do.

There are loads of great tunes here, and track 1, I'm waiting for you / Thady Casey's Fancy / O' Rourkes, gives the listener a good idea of what is to follow.  These are all reels, as are many of the other tunes, but there are also several jigs, a hornpipe or two, and a set of Highlands, to give a bit of variety.  These latter are Lucy Farr / The Dances at Kinvara, and the first is a quite different approach to Lucy's personalised version of the English schottische The Seven Steps, which has become quite well-known in English sessions in recent years.

All the playing is of the highest order, and the accompaniments - which are often very modern in feel - manage to rarely get in the way of the music.  There is one exception (I think), and it's an odd one, since it's an odd track to find on this CD.  Because track 11 is a song, Ye Rambling Boys of Pleasure, sung by Tracy Ryan, who has one of the most effective voices for traditional Irish songs I've heard in ages.  But the notes say 'Tracy, Ryan and Michael came up with this lovely setting' - and it's the 'lovely setting' which is being performed here, not the song!  As may be well-known, I'm no fan of accompanied traditional song, and this is a perfect example of why.  A terrific song, a wonderful voice, great musicians ... but I have no idea of what the song's about after a couple of verses.  The 'lovely setting' forces Tracy to sing it in a way which really doesn't communicate ... and if traditional style singing isn't about emotional communication and telling the story, what's its point?

This is a great record of Irish music in the modern style, superbly played.  Very enjoyable.