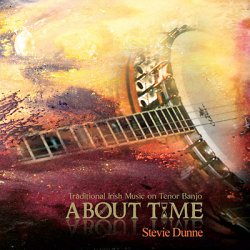 Well, this is a CD which wouldn't normally get reviewed here - but the playing is so stunning that I thought it wouldn't be fair to omit telling you about it.  There are several reasons why it wouldn't normally get reviewed here ... primarily that it's not 'traditional' in the sense MT tends to use the term.  To expand on that statement a little: of the 27 tunes on the CD, 7 were composed by Stevie Dunne himself, and a further 6 by other, named, contemporary musicians ... leaving only 14 tunes which we would normally think of as being traditional.

Further, all tracks are accompanied - by Stevie himself on guitar, Dónal O'Conner on piano/keyboard, Ryan O'Donnell on bouzouki, and Francis McIlduff on bodhrįn.  And a proportion of this accompaniment is quite a way from 'traditional', even by modern Irish standards.  Track 2 will give you an idea of what I mean (sound clip Bolies Road).

The little biographical information I can glean from the CD insert and publicity blurb, tells me that Stevie Dunne was born and brought up in the small fishing village of Clogherhead, Co Louth, and now lives and plays in Belfast.  He's been playing for 20 years.  His website adds the following: He began playing guitar at the age of 12, and was given his first banjo at the age of 13, when his uncle heard him picking tunes on his guitar.  Stevie instantly fell in love with the banjo and began learning tunes and developing his style and technique at that time.  Stevie’s banjo playing is energetic yet subtle with a distinct regard for tradition.

It adds: 'His use of ornamentation is artful'.  I'm not entirely sure about 'ethereal' or 'artful' - but it's certainly inventive, with some lovely semi-tone accidentals slipped in quite without effort or over-emphasis.  Here's another example - this time without accompaniment - from the final track (sound clip Ciarįns Reel / Spike Island Lasses).

This is a record of some wonderful banjo playing, if you don't mind the back-up.  Moreover, all the chosen tunes composed by Stevie and others seem to fit very well with the traditional items inclued here.