Somewhere Along the Road

Cathie Ryan first made a name for herself singing with the Irish-American Cherish the Ladies and Somewhere Along the Road is her third solo album since leaving the band.  Significantly, too, it is a marked improvement on the often overtly cloying and sentimental songs which characterised its predecessor, The Music of What Happens. 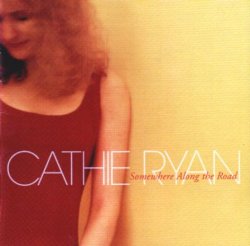 Partly the responsibility for this lies in improved song selection and the development of Cathie's own writing skills, but both her co-producers, John McCusker and John Doyle, make a significant contribution to the plot.  Interestingly too, the liner notes reveal that Cathie has been spending time in Ireland, while the album was itself recorded at the Rusbys' Pure Records studio in Yorkshire.

Further proof of her travels is provided by the first two songs, both of which are self-penned.  Carrick-A-Rede celebrates the excitement of a lovers' tryst on the small rock spanned by the scariest rope bridge in Ireland while Rathlin Island recounts the tale of the exodus of the island's population catalysed by famine (both are in County Antrim, by the way).  Ryan's other subjects include the sixteenth century pirate queen, Grace O'Malley, while her sources include the late Eithne Ní Uallacháin (the song Tá Sé 'na Lá from the Lá Lugh album Brighid's Kiss) and two songs unearthed by Eithne's sister, Pádraigín.  This latter pair, Ó Boro Braindí Braindí and Éirigh, a Shinéid, are, without question, the highlights of Somewhere Along the Road.  Sadly, Cathie sings neither song unaccompanied (nor any other on the album), but the backing here, dominated by Phil Cunningham's accordion is delicious.

Ryan's voice was erroneously described in a recent edition of Irish Music as 'earthy', an epithet so inaccurate that it has reinforced my resolution to buy the magazine's editor a dictionary for his birthday.  Her singing is as earthy as a glass of water and adjectives such as 'melodious', 'dulcet' and 'warm' are far more appropriate.  She also possesses an exceptionally fetching ability to employ effective vocal rolls, exhibited no better than on the album's most atmospheric track, Cailín Deas Crúite na mBó which, despite its title (translated as Pretty Maid Milking a Cow) is sung in English.  Much of atmosphere here is heightened by the sombre simplicity of John McCusker's fiddle.