The Well of Spring Water (book)

A Memoir of Packie & Micho Russell

by Michael Coady (No ISBN)

Spend some time at the Cliffs of Moher, looking out towards the Aran Islands and then drive north on the road towards Lisdoonvarna.  You will soon see a road sign on the left pointing you back to the coast, to the village of Doolin and the Aran ferry pier.  Drive down to the small village, park and take a stroll down Fisher Street towards the pier and there's a pub with one of those big "new-old" Irish pub signs outside.  Do you fancy a drink?  Why not?  But wait a minute.   This is no small west of Ireland watering hole.  It's as big as any metropolitan boozer and just as crowded.  And why is the Guinness 25p a pint more here than all the other pubs around County Clare?  What's going on?  Well, casual tourist, you have just stumbled on a musical temple, an icon, a nirvana of the Irish tradition, the end of the yellow brick road, the completion of a pilgrimage.  The only problem is that the two men that everybody came to see in the first place, especially from Germany, Holland and America, are no longer with us.

This slim volume marks those lives with an essay on Packie (1920-1977), another on Micho (1915-1994), a poem, a song, eight tunes and a mass of fascinating photos, including the famous one from the Topic record sleeve of the three flat-capped Russell brothers, Gussie playing whistle, Packie playing concertina and Micho the flute, sitting outside that pub in 1974 when the "J.O'Connor" sign was much smaller than the current one for Gus and said "bar" and "grocery" on either side of the name.

Clearly, the current tourist situation of a happy-go-lucky paradise where people sit around and play music all day is at odds with the history of this part of West Clare and Coady is at pains to point this out:

"By the nineteen fifties, whole communities had become so economically depressed and demoralised and so drained by emigration that they seemed beyond the point where demographic recovery was possible."

Take away the gift shops, hostels and campsites that dominate the village today and it is still possible to imagine the harsh life trying to eke out a living from small fields with more stone than soil at the surface.

As well as the economic depression of the first half of this century there was a concurrent socio-cultural depression.  This part of Clare had been a thriving Gaeltacht.  Séamus O Duillearga was collecting traditional tales in Irish here from the nineteen twenties until 1943.  By the time another Séamus, this time Ennis, was visiting by the late forties, his informants were supplying songs and tales in English.  The parents of the five Russell children - there was also Bridget and Mary Kate - were not unusual in their practice of speaking to one another in Irish, but to their children in English.  Coady reveals that when Packie introduced him to his mother Annie Maloney Russell, he sung to her in Irish to be told that she hated Irish because she was beaten for speaking it as a child.

Under these circumstances, the Russell family must have been unique locally in having three brothers who escaped the mass emigration.  Partly, it must have been because all three remained bachelors and so avoided having to provide for a family; burdens that drove so many Irish fathers to work abroad.  Annie apparently saw it another way.  She "blamed the music for what she saw as the irresponsibility of her sons in not settling down and marrying."

The small farmsteads were never going to provide a living in themselves and there was little other industry besides fishing and stone masonry.  Packie and Gussie worked cutting the famous Liscannor flagstones but it was hard, unrewarding and poorly-paid work.  Though increased prosperity has renewed the demand for stone for banks, hotels etc. in recent times, the fashion for concrete in the fifties and sixties meant that even the local quarries were in depression.

The author stumbled across the Russells during what was meant to be a fishing visit to Doolin in the early 1960's.  After a chance meeting with Packie in the pub, no fishing was done but a lifelong friendship with the brothers was to develop.  Initially he was amazed and delighted to have stumbled across traditional music still playing a part in everyday life, but he was soon to realise that he had encountered some very special people whose singing, music, tales; whose whole conversation was a source of delight.  Michael Coady, a prize- winning poet, was clearly the one to realise this.

His keen perception and great skill as a writer means that these short portraits of the two are very convincing.  In the sound clip we hear Gussie and Micho playing whistles together, but Coady points out that in his thirty-year close association with the Russells, they played music with others all the time but it was rare for two or three of the brothers to play together.  What certainly comes over in the book is that the brothers were very different sorts of people.  Two thumb nail sketches give an idea of the flavour and quality of the text:-

"Packie was a thinker above all; he quite clearly saw himself and his situation, he threw a sensitive eye on the world and on everything in it; he knew hard times, loneliness and black depression as well as the exhilaration of music and lively talk and conviviality.  He had a self-deprecatory air which might deceive anyone who knew him only superficially...."

"For all his openness and what people may have thought of as his rustic 'simplicity', ultimately there was something mysteriously inaccessible and opaque about Micho Russell's nature.  In the way he approached the world he was as clear as spring water, you could look into the well, but never comprehend its essential core......  He wore no mask, and perhaps that in itself was the mystery since, in one way or another, we all wear masks." 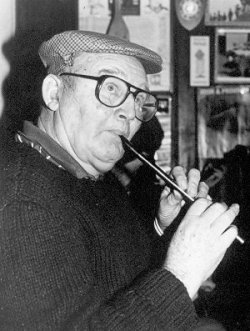 Thus although the book stands as a great tribute, it is not full of fawning praise.  There are equally telling comments on their musical style and on their attitude to music and to visitors.  Micho would play his music with anyone, great, good, indifferent or bad, who came to Doolin, Packie was less predictable, refusing on occasion to turn it on for coach parties who were 'doing the Burren' and raging against batteries of incompetent bodhran players, but gave a great deal to the people who took the trouble to get to know him properly.  In general, Packie expected the world to come and see him whereas Micho in his latter years became quite the globe-trotter.

Stories of the scrapes that Micho got himself into on his many tours circulate widely and they all hinge on his apparent desire to treat the whole world as an extension of the simple village life of Doolin.  Coady alludes to several of these but tends to play them down, opining that the anecdotes for all their hilarity get in the way of painting an accurate picture of the man.

This is an intriguing book; the quality of the writing adds to the fascination of the subjects.  It is a worthwhile addition to the growing number of books and booklets, notably by Denis C Winter, on the Russells and it goes some way to off-setting the heavy focus on the outgoing Micho rather than the seemingly more reserved Packie.  "What about Gussie?" now becomes a fair question - he has outlived his brothers.

"What about Doolin?" becomes another question.  Well, go and enjoy the music in O'Connors, but if you want to get a real idea of the current status of traditional music in the Burren area, you should go to sessions in Kilfenora, Ennistymon, Kinvara, Corofin, New Quay ... anywhere, I'm afraid, apart from Doolin.