Come West Along the Road 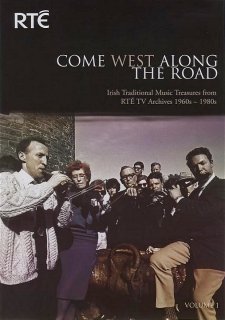 It's a given that the sound on TV music programmes is almost always absolutely dreadful - and the viewers in the Irish Republic seem to fare no better in this respect than we do here in the UK.  However, in terms of what TV music programmes are broadcast, they seem to have done a great deal better - at least as far as programmes containing traditional music are concerned.

This DVD contains 145 minutes of selections taken from 'the popular, long-running TV series' of the same name, broadcast since 1994 by RT….  The actual material dates from 1961 to 1986.  It's introduced by the programme's presenter, Nicholas Carolan - who's also the well-respected Director of the Irish Traditional Music Archive in Dublin.  Which might lead one to expect a production backed up by a good deal of background information - but sadly, this is far from the case.  Despite the DVD case's provision of two clips to accommodate a substantial booklet, there is none.  All we get is this cover picture and a track list on the back, plus a little information about the TV series and the main Credits.  True, each track is preceded by a screen giving the names of the performers and song or tunes, where and when recorded (or transmitted, if the latter is not known), but this is pretty thin stuff.

Nicholas says, in his on-screen introduction, "For most viewers, this is effectively new material, never seen before", which prompts one to wonder about exactly what audience RT… is aiming at with this release.  Given the nature of some of the older pieces included (evening-dressed tenors and Mikki and Griff soundalikes), one might imagine a Past Times clientele - yet there are a few pretty hard-line traditional inclusions, too, which call this assumption into question.  But, either way, the lack of any substantial contextual information is perplexing.

Aside from the expected appearances by the likes of The Bothy Band, Clannad, De Danann, Planxty and Stockton's Wing, there is still a good deal on offer here which will interest many MT readers.  The sean-nÛs is well represented by Darach ” Cath·in, Niocl·s TÛibÌn, Se·n 'ac Dhonncha and P·draigh ¡ghas, and there's plenty of good music from Liam O'Flynn, the Kelly family, Mary MacNamara & Martin Hayes, Tommy Peoples, Julia Clifford & Denis Murphy, Joe Cooley, the Tulla and Tullyvin Ceili Bands, and many more.  Snatches of archival footage let us see and hear the Swords Mummers and the Kilbaha Wren Boys. 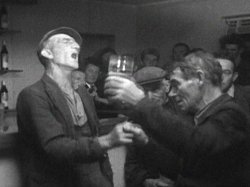 My favourite tracks have to include Darach ” Cath·in singing ”ro 'SÈ Do Bheatha Abhaile, Se·n 'ac Dhonncha with Bean an Fir Rua and Frank Harte with Valentine O'Hara.  But pride of place is shared by 'an unknown boy' singing Four Green Fields unaccompanied at a fleadh in Buncrana in 1975 - which is absolutely wonderful - and P·draig ¡ghas singing An Baile At· L·imh LÈi Si˙d in a pub in Ballydavid, Co Kerry, in 1967, and being given a helping hand by one of his mates (left).  He's a damned good singer, too.  This last is described as 'Untransmitted Stock' - which is truly a disgrace, since it's among the very few items on the DVD which appears authentic, rather than a posed set-up by the programme's director.

This last aspect of the TV production is something of a puzzle, since one might imagine that, given RT…'s long experience of transmitting visual images of traditional performers, they might have moved a bit beyond the stock studio presentations, and OB sequences of musicians in unlikely positions in urban or rural settings, often surrounded by crowds of nervous onlookers.  The Frank Harte track has him alone sitting by a canal bridge - which is fine, and has no distractions from the song - and the wonderful P·draig ¡ghas track is, again, in a natural setting.  Beyond these, everything else appears pretty contrived - and with the cameraman under strict instruction to be sure to have a look at anything else in the vicinity which may be marginally more interesting that the poor sods singing or playing.

And some of them are obviously embarrassed by the proceedings: Niocl·s TÛibÌn starts Na Pr·taÌ Dubha and is clearly ill at ease, so the remainder of the song is accompanied by period etchings and film of him striding about the countryside.  Poor Willie Reynolds fares far worse; he's clearly uncomfortable about the whole thing and, as a consequence, is not playing his pipes all that well.  His body-language and facial expressions tell the whole sad story while, through the large window behind him, we can clearly see the activity in the street during the 1965 Thurles fleadh - which is highly distracting.

So - this is an interesting DVD, and one I'm pleased to have, although I'm uncertain about recommending it wholeheartedly - for most of the reasons outlined above.  Certainly the sound recording quality lets it down pretty badly, and some of the viewing can be more embarrassing than enjoyable.  But, at least it's there ... I can't imagine the BBC wishing to - or being able to - come up with anything remotely similar.  And I really do look forward to Volume 2 (1987 to the present?) where, I hope, many of the problems of these early recordings will have been ironed out.