Down The Road; Clasped to the Pig; The Wedding / Pat McCarthy’s Jig; Battle of Aherlow; There Was A Time; A Ramblin’ Man; Felix and Johnny Doran / The Bunch of Keys / Rakish Paddy; A Cúshla; No Balls at All; Donal Kenny; Michael Was Hearty; Gum Shellac; Sweet Kinnity; McKenna’s Dream; The Round Top Wagon. 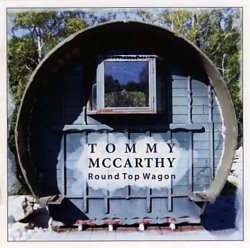 Tommy McCarthy's 'discovery' a couple of years ago made something of a splash in English traditional song circles.  As with most other newcomers to the scene, he was heard mostly in 'floor spots' at clubs and festivals, and so singing only a few songs.  We had invited him to the Stroud 'Spring Thing' in 2010 but, sadly, his mother died the day before, so he was not able to spend the weekend with us.  It took a while before he had a CD available, until Ron Kavana stepped into the breach, to produce this disc in late-2010.  Good man, Ron!

Not too many English readers will have heard much Irish Traveller singing, unless they've bought either the Topic John Reilly LP from back in the '60s, or From Puck to Appleby: songs of Irish Travellers in England (MTCD325-6), and it was interesting to learn that one of the 'stars' of that record, Mary Delaney, was in fact, Tommy's aunt!  Nor are they likely to have heard many of these songs before - Irish Travellers are, if anything, even more insular than English Gypsies, and also have a strong songwriting tradition ... several heard here were either actually or probably composed by singers of a generation or two ago, and two more by Tommy himself.

So - what of the singing?  A number of reviewers have compared Tommy's style to that of Joe Heaney; that's fair, I think, because he does sound a little like Joe at times, although his decorations, while similarly complex, are noticeably different.  You can get the idea from this short clip from There Was A Time (one of Tommy's own songs).  Clearly he's a very good exponent of the sean nós, although where he picked it up in Birr, Co Offaly, is anyone's guess.  There are a lot of good and interesting songs on this CD, many of which came via Tommy's mother, Mary, from his grandfather Johnny McCarthy.  I particularly like A Ramblin’ Man, with its quirky tune.

This is a very rewarding CD by an excellent singer, with a host of interesting and unusual songs.  We are so lucky that he wandered into Sharp's folk club three years ago, and that he's young enough to be with us for many years to come.

The Tin Folk Music label's website contains all you could reasonably ask for on the subject of Tommy, his CD and his songs - the only pity is that in the Lyrics Section, only the texts of two songs are available.  But I think it's quite a new venture, and hope that more will be added soon.