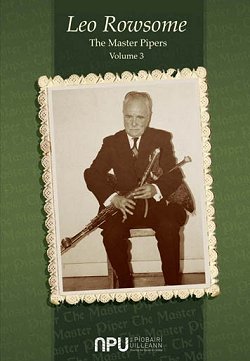 This CD is a collection of just over 60 minutes of home recordings made in the 1960s by uilleann piper Leo Rowsome.  Rowsome was one the few Irish musicians in Ireland to record in the 78 era.  From the early '20s to the mid '40s he recorded dozens of sides, mostly playing the 1926 concert pitch set of pipes that he built himself that is now played by his grandson Kevin.  In 1959 Claddagh records was set up to produce an LP of Leo and there are a few tracks from him on the Drones and Chanters compilation LP issued in the early 1970s after his death in 1970.  Topic released two LPs of Leo's 78s in the mid '70s and the odd additional track has appeared on a few other compilations of 78s.  These recordings are less formal; there are friends and family listening, sometimes chatting in the background but the quality of these 50 year old recordings is remarkably good.

Leo made his living from making and playing the pipes and teaching.  His reputation as a maker was immense, his concert pitch sets are still keenly sought after today and most of the current modern makers have used his pattern as their starting template.  As a showman, he had to play to attract and hold the listeners' attention and he did this by playing a simple melody and ornamenting it with regulator accompaniment and a strong rhythm.  As a consequence there's a lot less tight fingerwork than say Ennis or Clancy, his two most well known contemporaries.  Like the Dorans, Leo uses the regulators as a constant, almost insistent, accompaniment to the tunes.  At times this is almost as bad as some of the "bump-bump" piano players on so many 78 recordings.  In 1956, Rowsome suffered a serious illness that took the edge off his abilities and the regulator work on a few of the tracks sounds a bit laboured and it doesn't add to the music.

On the other hand, his regulator accompaniment to slow airs is exemplary.  The pipes are always in great tune and balance, and the overall effect shows clearly why the Uilleann pipes are sometimes called the Irish organ.  On the first and third tracks Leo does some interesting work on the regulators; while the top hand plays the melody, his left hand drops and plays short counterpoint arpeggios across the bottom two regulators.

The music presented covers jigs, reels and airs; but no hornpipes.  There are also a number of marches that seem to be popular with pipers but few other musicians these days.  The selection is a mix of well known session tunes, such as The Hunter's Purse, and The Battering Ram and rare or obscure items such as the Lightning Flash from O'Neill's collection and a tune named as Jackson's Cook in the Kitchen which the notes suggest was exclusive to the Rowsome family.  Closer inspection, suggests this is a 3 part version of the Angry Peeler which coincidentally immediately precedes The Cook in the Kitchen in O'Neill's 1001.  In addition to the third part, Rowsome's setting feels much older than the Peeler.  Perhaps the recent interest in pre-famine tunes from the Goodman collection will help this tune back into wider popularity.

Rowsome was generally considered a solo performer but he did have a number of musical associations playing in duets, trios and quartets and we get a brief glimpse of this in the later tracks on the CD.  These tracks were recorded by RTE at the annual Fleadh cheoil in Boyle in 1960 and feature fiddler Larry Redigan and Galway fluter Vincent Broderick.  Leo was also responsible for arranging music for a piping quartet that broadcast on Irish radio.  The final two tracks feature heavily arranged tunes for three pipers Leo, Jim Dowling and Sean Seery.  To modern ears Leo's simplistic harmonies may sound a bit hackneyed but this was a different age and these are live recordings, well received by the audience.

The CD is presented in a larger format DVD case and as with the other NPU releases in the series, there are generous sleeve notes and photos.  No credit is given for the author but the slightly eulogistic nature of the notes suggest it is his daughter Helena Rowsome, who has done a lot of work to keep the memory of her father fresh.  Several of the tunes can be found in Leo's own settings in the book of Leo's dance music, published around 15 years ago.  A number of these differ from the usual settings in use in sessions, such as the Jolly Tinker or the swapping round of the parts in his four-part setting of The Maid behind the Bar.

Overall this CD doesn't have the immediate impact that the previous CDs in the series on Johnny Doran and Tommy Kearney had.  Rowsome is very solid, always precise, but doesn't take risks.  His contribution to the piping repertiore was mainly in his willingness to adapt any tune in the book to the pipes rather than relying on the piper's classics.  Overall this leaves the CD as a great source for the practicing or learning piper but maybe a bit too academic for the casual buyer.

The CD is available from na Piobairi Uilleann http://pipers.ie/store/ where there's a discount for members, or from Custy's.