Despite the move (some might say removal) of Martin Frost as boss of the EFDSS, his brainchild lives on, and here we have Volume Two of the Root & Branch series.  It's both like and unlike its predecessor - and both more and less interesting. 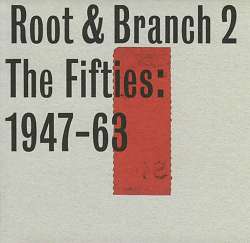 Where Root & Branch 1 - see review - was diverse and fragmented (having as it did such an imprecise theme as A New Land), volume two is quite tightly focused on the decade - 16 years is a decade in hexadecimal! - from Indian Independence to the Kennedy assassination.

It's like its predecessor in that it shares the unprepossessing grey box presentation and tacky CD packaging; also the quirky layout and titling (the CD's title is still on the back, and the record still has no number).  It might be considered strange that every single review I've ever seen comments adversely on these points, yet nothing has been changed.  So much for the power of the press!  The content also follows the same format: CD in cardboard case, booklet, bubblegum cards (I got the South Queensferry Burry Man and F J Child this time), facsimile (a 1951 Bill Broonzy concert programme), no postcard this time, and a Dave Atkinson poster/wallchart.  This latter item is a timeline for the period, laid out with the dates in the middle, inter/national events above and 'folk' events below.  It is, as are all such things to people like me with short memories, extremely interesting.  How many of you knew that stereo recording, the silicon chip, aluminium cans and Sillitoe'sSaturday Night and Sunday Morningall saw the light of day in the same year?  Or that the Common Market, The Ballad of John Axon, the Notting Hill riots and Skiffle Club changing to Saturday Club were all also hustling for attention at the same time?  When? - 1958, that's when.  An excellent inclusion.

It differs from A New World in that the booklet has a much more serious tone to it and much more text - at a guess, almost twice as much.  I'm in favour of this change, and the articles - as detailed above - are all full of interest and information.  Its cover presents the first of the jarring inconsistencies in which Unknown Public (the producers of the series) seem to specialise.  It presents nine photos of Fifties' folky happenings (all but one taken at the same event, by the look of it) featuring such notables as MacColl, Seeger, Lloyd, Ennis, Behan, etc.  The odd one out is The Rakes.   All fair enough, if not terribly representative - but the title 'Everybody Swing' is pasted, bold, diagonally across it ... and nobody's swinging, everybody's singing!

I'm finding to difficult to decide about the CD - more or less interesting?  Since I lived through the Fifties and was old enough to remember it, the record may not have the impact for me that it might for a younger listener.

Certainly there are a lot of good things - most obviously that the 'Featured Singer' this time is the truly wonderful Jane Turriff, who gets three tracks - Rigs o' Rye (sound clip), Dowie Dens of Yarrow, Away Out on the Mountain - to show just what a splendid and eccentric singer she is.  As I commented regarding the first Root & Branch "It's not explained whether the 'Featured Singer' is selected because his/her songs suit the theme of the volume, or whether this feature is a separate and unconnected addition."  This still remains unexplained - and Jane's songs appear to have little connection with the 'Everybody Swing' concept.

Further delights include one of the first English jazz bands, George Webb's Dixielanders, with Humphrey Lyttleton on cornet, playing The Soldier's Lament (sound clip), which Reg Hall identifies as The Butcher Boy, but I'd guess most English listeners would think of as A Man Came Home from Work one Night (sound clip).

Then there's Michael Gorman and Willie Clancy, from 1955, playing The Rambling Pitchfork / Fasten the Legging (sound clip) - so, so good!  Margaret Barry sings She Moved Through the Fair in the public bar of the Bedford; Scan Tester and Rabbity Baxter play Jenny Lind, Cyril Poacher sings Australia and Walter Bulwer & Co play The Bluebell Polka - all of which are likely to be well-loved and familiar to many MT readers.

Then there are some of the other things the Fifties are remembered for: Ewan MacColl sings Go Down Ye Murderers (which, let's face it, is a great deal better than him pretending to be a Scots traditional singer); a five and a half minute extract from Sing Christmas and the Turn of the Year, a Lomax/Parker BBC radio Christmas programme which makes Folk on Two sound positively brilliant; and tracks from three dance bands of the period.  These three follow one another and make interesting, if depressing, listening.  First is the Square Dance Band of the EFDSS with Roxburgh Castle / Durham Rangers.  Bearing in mind that this was probably the very best of the hundreds of such bands up and down the country, and that their style remained the paradigm for Society bands well into the early 1970s, you may have some idea why Oak, OSB, Flowers, New Victory, etc. wanted to take a rather different line!  This grim recital is followed by Peter Kennedy's Haymakers - certainly a step forward, but still a million miles away from anything which Kennedy can have heard in the tradition.  Last of the trio is the Jimmy Shand band, who play very similar sorts of tunes in an utterly different way - creating an entirely other music.  Personally, it's still not all that much to my taste, but there's no denying the quality, drive, guts and joy of the music.

All in all, I think I like the booklet better and the CD less-well than volume one.  Jane Turriff aside, this one has fewer real gems I've not encountered before, and far less diversity.  On the other hand, it's more focused on its subject.  But I still feel that 18 quid is a hell of a price to be asked to pay for it.

Reg Hall makes the worthwhile point that the Fifties were the time when "amateurs playing out their visions and exercising their minority interests ... laid the foundations and set the agendas for later developments in popular music" which saw their blossoming when the "increasing affluence, many personal freedoms and greater social mobilities" of the 1960s began to have their effects.  Very true, important and interesting ... however, when it come to a selection like this one, I know which decade's music I'd prefer to listen to a CD of.