Roosevelt in Trinidad: Calypsos of Events, Places and Personalities 1933-1939

A friend of mine, who doesn't care for soca, nevertheless once described it, accurately enough, as "calypso with 40,000 volts put through it."  Soca tends to be more party-hearty than the older music (no criticism implied or intended - Hot Hot Hot is one of the all time great get-down tunes), but among the virtues it inherits from kaiso are verbal ingenuity, topical satire, and great pseudonyms - Black Stalin, Scrunter, Mighty Grynner, and the unfeasibly surreal Red Plastic Bag among them.  So when the editor asked if I wanted to review a CD by Alexander D  Great, Emperor of Socablues, I said, "How can I turn down someone with a name like that?"  Well - we live and learn.

Forty eight year old David Alexander Loewenthal is of mixed German and Trinidadian parentage and, though Trinidad born, is British by upbringing. 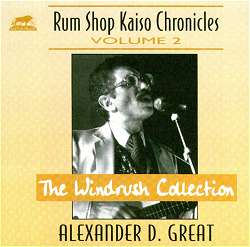 He performs live with the eight piece Great Band (pan, percussion horns, guitar and bass), but on this disc, apart from the addition of a pan player on one track, he is self-accompanied on a £19.99 child's guitar.  As Alexander rightly says, this sounds rather like a cuatro, but the extra strings enable him to play the more advanced chords that come easily to someone with a degree in music, and playing experience in numerous genres.  Despite singing in a Trinidadian accent - necessarily, since calypso with an English accent just doesn't sound right - his topics on this CD are aspects of the black experience in Britain since the Empire Windrush arrived in 1948.

That's obviously an area of life and history with the potential to be quarried for song making, and the 12 tunes here are among those which Alexander has composed weekly for the Caribbean Affair show on Choice FM.  There are two problems with this collection, unfortunately: the words and the music.  Despite Alexander's command of his instrument, and some unusual key changes, the sound of just his voice and the ‘baby guitar' is too minimalist and unadorned to sustain attention.  There is also a shortage of strong, catchy melodies.  Save on Unzip a Banana, his tunes are mostly somewhat meandering constructions, with very long refrains, which become tedious through repetition, and lead one to feel that Alexander's musical creativity is somewhat short winded.

As for the lyrics, again apart from Unzip a Banana, which if not the most original double entendre, is cleverly put together, there is a fatal lack of wit and satirical edge.  Admittedly, there are no laughs to be had from the New Cross fire or the Stephen Lawrence case, and the outrage expressed in Thirteen Dead and Nothing Said and One Law is the only appropriate response.  Even so, to make implicit comparisons, as Alexander does in the former song, with the Holocaust and Kristallnacht is just plain stupid.  However reprehensible police, political and media insensitivity were in the New Cross case, there is no equating that with systematic State terror and murder.  Nor is it proportionate to refer to ‘Ku Klux Kensington' in the context of a dispute over the storage of carnival floats under the Westway.  (Now, if the fiery cross were being raised outside Harvey Nicks …)

I'm not blind to the legitimate reasons for grievance that black Britons have, nor to the social and political structures that buttress them; but a CD consisting almost entirely of humourless whinging about victimhood is not a worthy heir to the social commentary tradition of calypso.  Nor does its ethos pay proper tribute to the Windrush generation, who, as Alexander notes in Remember Our Heroes, were strivers and survivors, rather than acting the professional victim, and seeking every opportunity to whine and complain in the manner of Harry Enfield's Kevin the teenager.  Priggish, self-righteous, short on humour, and putting on a fake accent, The Windrush Collection is, I suppose, music for our time; as they say in the focus groups, ‘If Tony Blair was a CD, which one would he be?'

It's something of a relief to turn to Roosevelt in Trinidad, if only because of the greater musical variety inevitably offered by an anthology, notwithstanding that 15 titles out of 25 are accompanied by Gerald Clark and his Caribbean Serenaders. 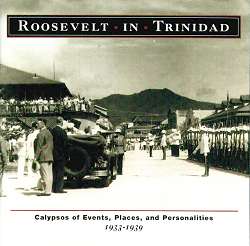 These 15 were all recorded in New York, whither the more popular calypsonians travelled annually from 1934 onwards.  At first sight, it seems remarkable that the record companies saw the funding of these trips and sessions as a commercial proposition in the Depression years, but no doubt there was sales potential among the Trinidadian, and other Afro-Caribbean, communities in the United States, as well as in the islands themselves.

It was, of course, a very different world that provided the context for calypsonian commentary in the thirties,

as The Lion's King George the VI (aka Three Cheers for the Red White and Blue) should make clear (sound clip).  It doesn't need stressing, of course, that colonial peoples' loyalty to the British Empire wasn't exactly reciprocated, even when Lion was recording his song.  After the Second World War, the Empire was simply too expensive for a near-bankrupt Britain to sustain, and Roosevelt, eulogised in the CD's title track, thereby achieved one of his secondary war aims, although it was a long time happening.  Those who made the move to ‘the mother country' soon found, as Alexander D Great points out, that they were regarded as immigrants rather than British citizens.

Equally, however, it shouldn't - but may - need stressing that West Indian loyalty to the Empire, Britain and the royal family in the thirties and after was genuine and fervent,

as most obviously seen in the numbers who fought in both World Wars.  Lord Executor's Poppy Day, recorded in 1938, gives an indication of the intensity of local pride in the fallen, both Trinidadian and from elsewhere in the Empire (sound clip).  The loyalty lasted for longer than might be thought, too; when I moved with my family to British Guiana in 1959, the first question asked me at my new school by a fellow ten year old was, "Princess Margaret live in England, boy?"  Not long after that, we all got the morning off school in New Amsterdam to go to the Gai'ty and watch the flim [sic] of her wedding.  It's no surprise, then,

to find tributes to the Duke and Duchess of Kent and Edward the VIII included, as well as Executor's anticipation of ‘the coming coronation,' Reign of the Georges.  Here's a snatch of his condensed history of the five previous Georges (sound clip).  As well as giving another glimpse of the vintage calypsonians' way with words - or, as they would no doubt have said, superior verbal dexterity - this clip enables me both to praise the CD's excellent annotation, by John Cowley, and to point out just about the only howler in the transcriptions, where ‘by George Stevenson' has been interpreted as ‘by George, even son.' (We were still being instructed about William the Conqueror and his successors in BG in 1960, I remember, and it did seem mildly pointless, even to my schoolboy self; but we also learned about the inventor of the ‘Rocket.')

Imperial loyalty aside, however, one of the surprising aspects of this CD is the virtual absence of songs taking an adversarial stance to the powers that were.  Lord Beginner's tribute to labour activist Captain Cipriani notes that:

He had to leave a meeting at Barbados,
At Antigua he nearly give the governor blows

...  but there are no songs included dealing with Cipriani's more radical rival, Tubal Uriah Butler, who was the subject of a splendid LP, Where Was Butler? (Folklyric 9048) compiled by Dick Spottswood in 1987.  There were limitations on what could be said in kaisos, variously self-imposed from prudence, dictated by the caution of the record companies, and legally enforceable under the sedition law of 1934.  Nevertheless, and albeit sometimes in veiled tones, Atilla the Hun and others made clear their sympathy for Butler, and their anger at the enforced resignation of Sir Murchison Butler, and the transfer of Howard Nankiwell, respectively the Governor and Colonial Secretary, for identifying low wages and poor living conditions in the oil industry as the causes of the Fyzabad riot, in whose aftermath 14 people, including two policemen, were killed.  When the Forrester Commission reported on the disturbances, Atilla condemned its conclusions as ‘English diplomacy' (meaning deviousness), in a calypso which he claimed was banned in Trinidad.  Certainly it was more outspoken than most:

Read through the pages, there is no mention
Of capitalistic oppression,
Which leads one to entertain a thought
And wonder if it's a one-sided report.

But if Roosevelt in Trinidad is to that extent itself a ‘one-sided report,' it's still excellent listening.  Rounder deserve a special commendation for bravery, for including three songs dealing with a subject that is surely commercial death in the American market - cricket.  (If the royal family were well regarded, cricket was more akin to a religion; I got the morning off school for that royal wedding film, but three days when MCC played Berbice.)  John Cowley's footnoting of these songs for an audience that couldn't care less about leather and willow is truly heroic, although it could have been noted that the West Indies' captain, ‘Mister Grant' is so identified as both an amateur and - what the captain had to be in those days - a white man.

Perhaps as a counterweight to matters that are beyond a boundary for many listeners, there are also testaments to Trinidad's fascination with the culture of the United States, both on screen and record: The Lion praises the Four Mills Brothers and Bing Crosby, who has a queer eccentricity, He takes his hat off very infrequently, while Tiger catalogues his favourite Movie Stars.

As this clip demonstrates, it doesn't all go Hollywood's way; can there be another song that boosts Wheeler and Woolsey alongside Laurel and Hardy - or indeed at all? (sound clip).  Then, too, there are the songs that deal with events of more local interest -

some tragic, like the Trinidad Hurricane, some treated tragicomically, like the Treasury Fire in which 365,000 gallons of bonded alcohol were consumed by the flames (sound clip), and some of them nine days' wonders, like Black Prince's tale of the School Boys' Adventure, when seven lads who rowed out from Carenage to see the arrival of the luxury liner Normandie found themselves carried to Venezuela by the current instead.

The contents of Roosevelt in Trinidad were recorded in just seven years, and I'm reminded of John Storm Robert's observation (à propos the musically very different calypsos of Sierra Leone) that these songs function as an oral daily newspaper, complete with editorial and gossip columns.  The News of the World used to proclaim on its masthead that 'All human life is there.'  That wasn't true of the News of the World (very little about existentialism or jazz discography), nor is it of calypso (no dirty vicars, although the sedition laws were passed as a result of King Radio writing a song about an adulterous liaison among the white upper classes.)  It's true in spirit though, and seldom can current events have been the source of such musical pleasure as they were and are on the 78s that now comprise this CD.